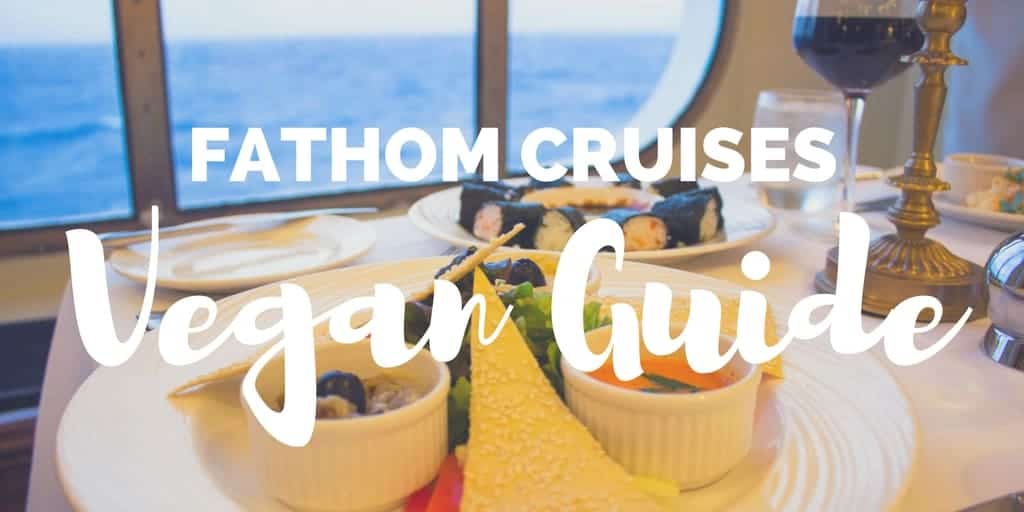 Dining as a vegan on Fathom Cruises has never been easier!

I’ve written a general guide to cruising as a vegan, including my experiences on board other cruise ships. I’ll walk you through the easy steps to take to ensure that you savor delicious, plant-based food on your Fathom Cruise. If it’s anything like my cruising experiences, you’ll have passengers at neighboring tables wondering how they can order what you’re eating! 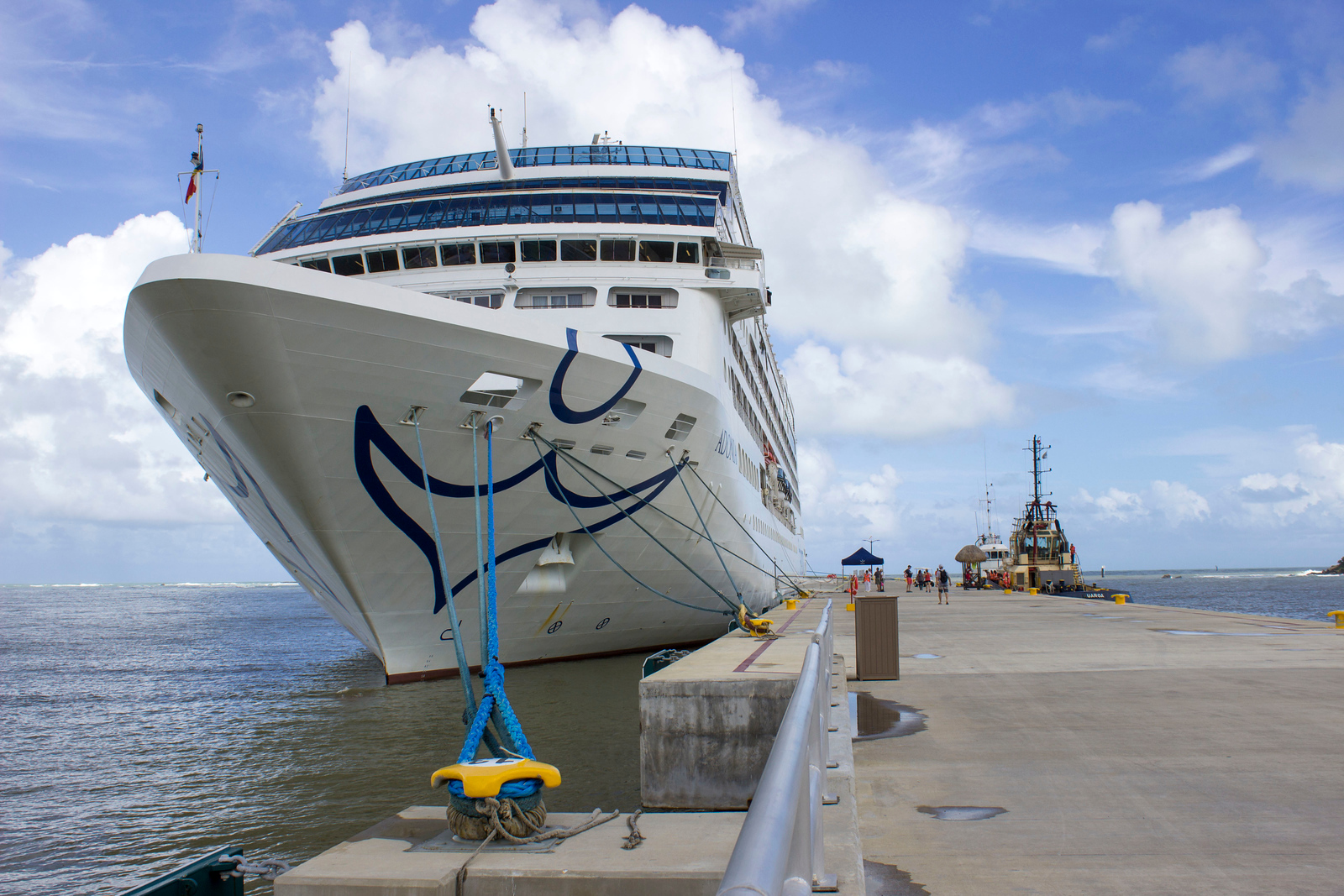 On the Fathom Cruises website, you’ll fill out some passenger information ahead of time. Conversely, you can always call them to provide these details. One of these questions asks if you have any special dietary needs. I generally write something like, “vegan – no meat, dairy, eggs, animal products,” just in case there is any confusion over what the term, “vegan” means. It’s always good to let the cruise line know ahead of time that you require special meals so they can bring extra ingredients on board for you. 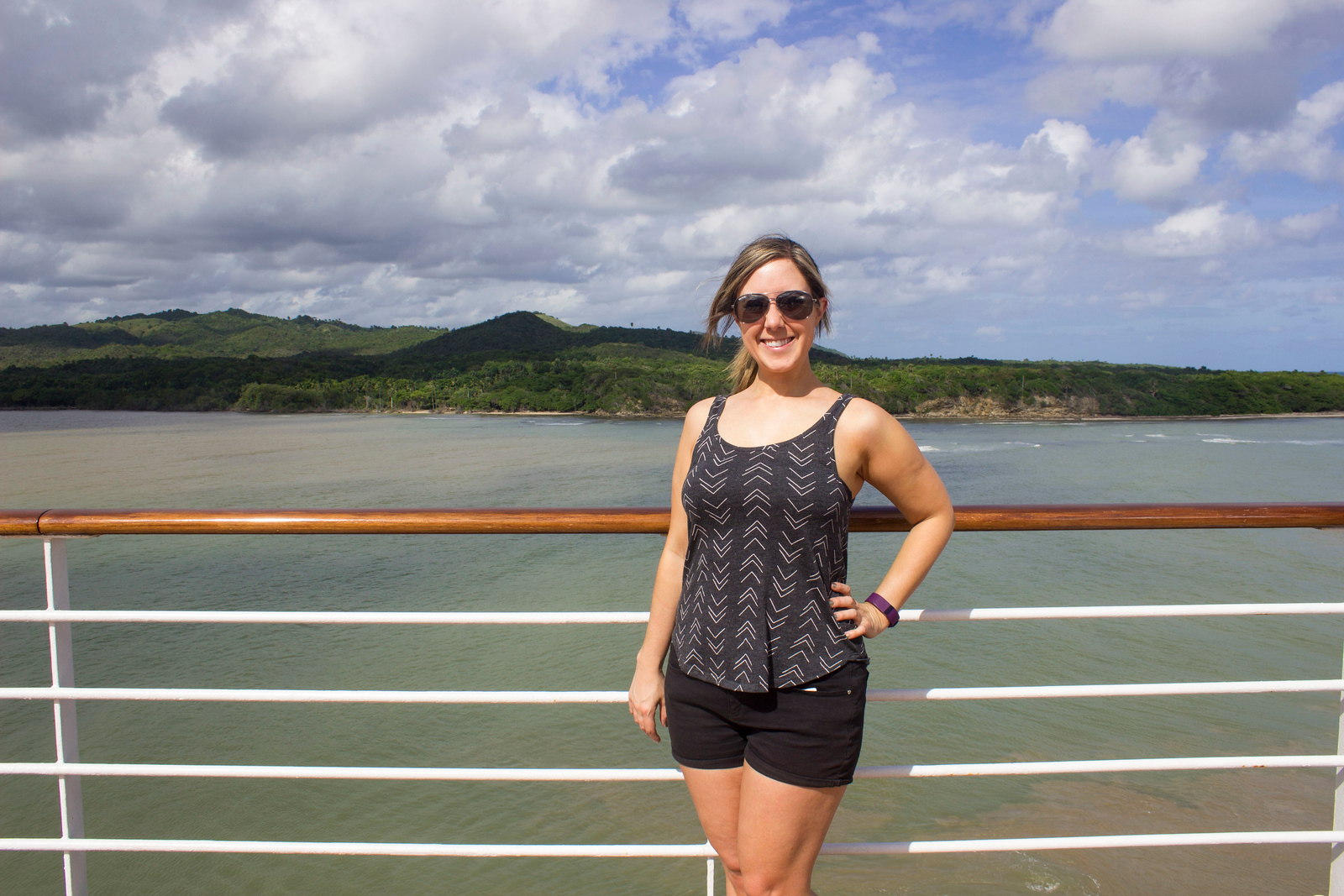 My sister, Robyn and I boarded the ship as early as possible. Our rooms weren’t ready yet, but we were told to help ourselves to lunch at the Conservatory Buffet. Thankfully, there were plenty of dishes that were naturally vegan so I had no problem dining there. This was the case throughout the cruise as similar meals were found daily at the buffet.

There was always lots of fresh fruit (watermelon, cantaloupe, pineapple, honeydew melon, berries, pears, apples) and ingredients to make a giant salad. Balsamic vinaigrette or other vegan vinaigrettes were always available, as was a simple oil and vinegar dressing. In addition, there was bread with vegan margarine. For entree-type dishes, there was either a pasta with tomato sauce, an Indian curry, a vegetarian rice dish, potatoes, or other vegan meals. At breakfast, I would eat potatoes, a toasted bagel with jam or margarine, and fruit. Cereal was always available, and I could easily request a glass of soy milk, almond milk, or coconut milk.

Yes, there were three kinds of plant-based milk on the cruise ship! I was really excited about this. At the ship’s coffee shop, Raffles, you could order any espresso beverage with these plant-based milks in place of cow’s milk. I alternated between drinking an Americano, soy lattes, almond milk cappuccinos, or even Cuban coffee if I wanted an extra jolt of energy.

At the Ocean Grill, there was a veggie burger – a red bean burger. I wasn’t able to get any official confirmation that there wasn’t egg in the burger, as this can be used to bind it together. It’s definitely vegetarian, but I’m not 100% sure if it’s vegan.

Oh, and how could I almost forget…there were lots of alcoholic drinks on the ship that were naturally vegan. If you’re into frozen drinks, order one of their margaritas or daiquiris. They’ll put you right in vacation mode! Would you believe that the Fathom Adonia has seven bars/lounges? They never felt crowded and there was always lots of space to sit at each one. Each area had its own wait staff and bartenders to make you whatever kind of drink you’d like.

There was a separate vegetarian/vegan menu that you could order from every night! The vegan choices were clearly marked.

The chefs were completely familiar with what being vegan meant, and adjusted any meals accordingly to remove any animal products. Some of the time I ordered from the special vegan menu, and some of the time I was able to order or adjust items from the regular menu.

WHAT TO DO ON THE FIRST NIGHT

The main dining room on the ship was the Pacific Dining Room. When we arrived on the ship, I went to speak with the dining room staff earlier in the day. It’s always good to make the staff aware that you are vegan. Give everyone lots of notice, if possible. They made a note of this with my cabin number. When we showed up for dinner, the Maitre d’Hotel was already informed that I requested vegan food.

He asked if I wouldn’t mind ordering from the regular menu that first night. Since the entree wasn’t easily made vegan, the Maitre d’Hotel suggested that the chefs make a pasta dish. I could never turn down a bowl of pasta, so that was totally fine for me. Here’s what I ate on the first night on the Fathom Adonia:  a garden salad, gazpacho (chilled tomato soup) and tomato sauce pasta with a side of steamed greens. It wasn’t the most versatile or exciting meal in the world, but it tasted delicious. 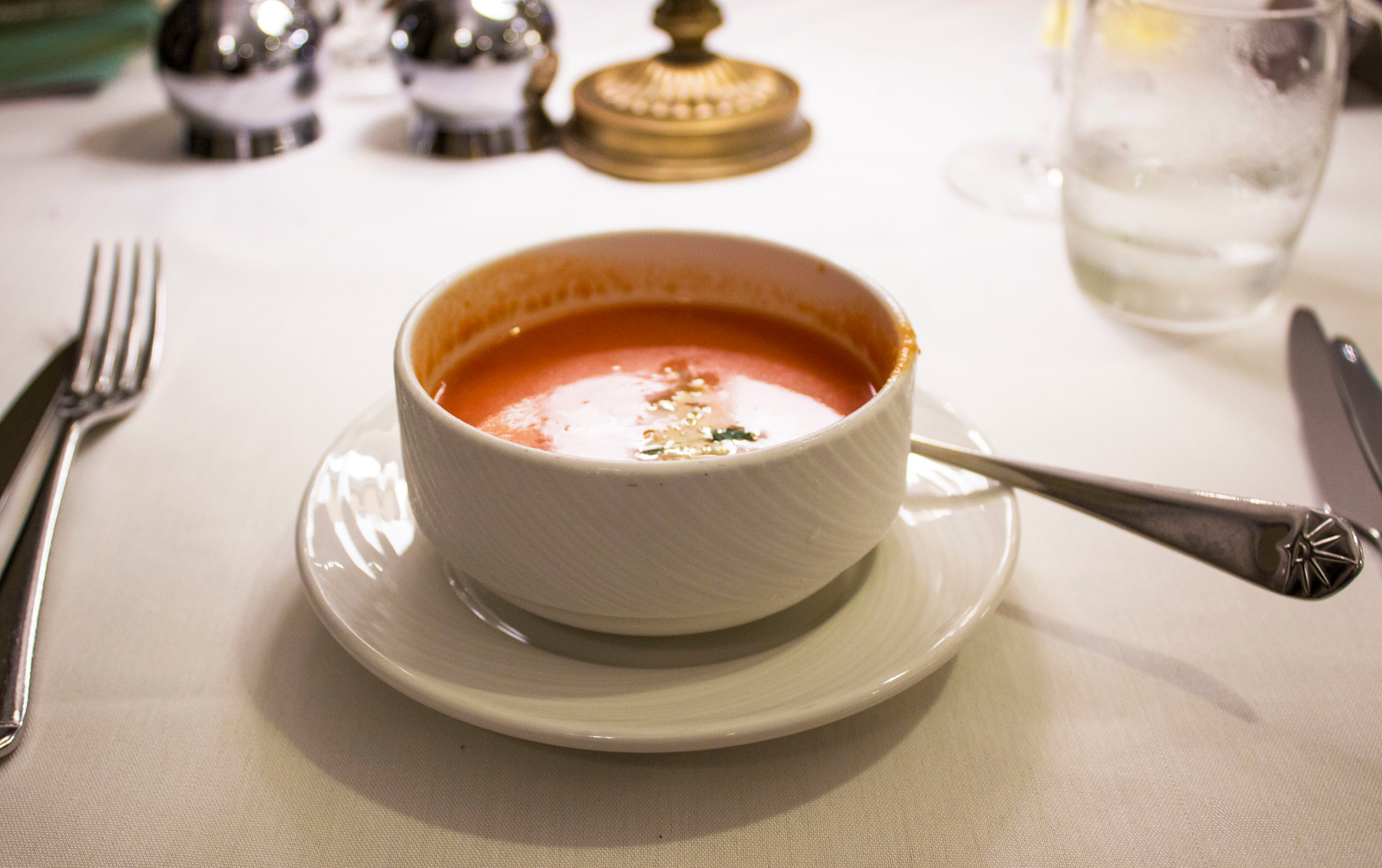 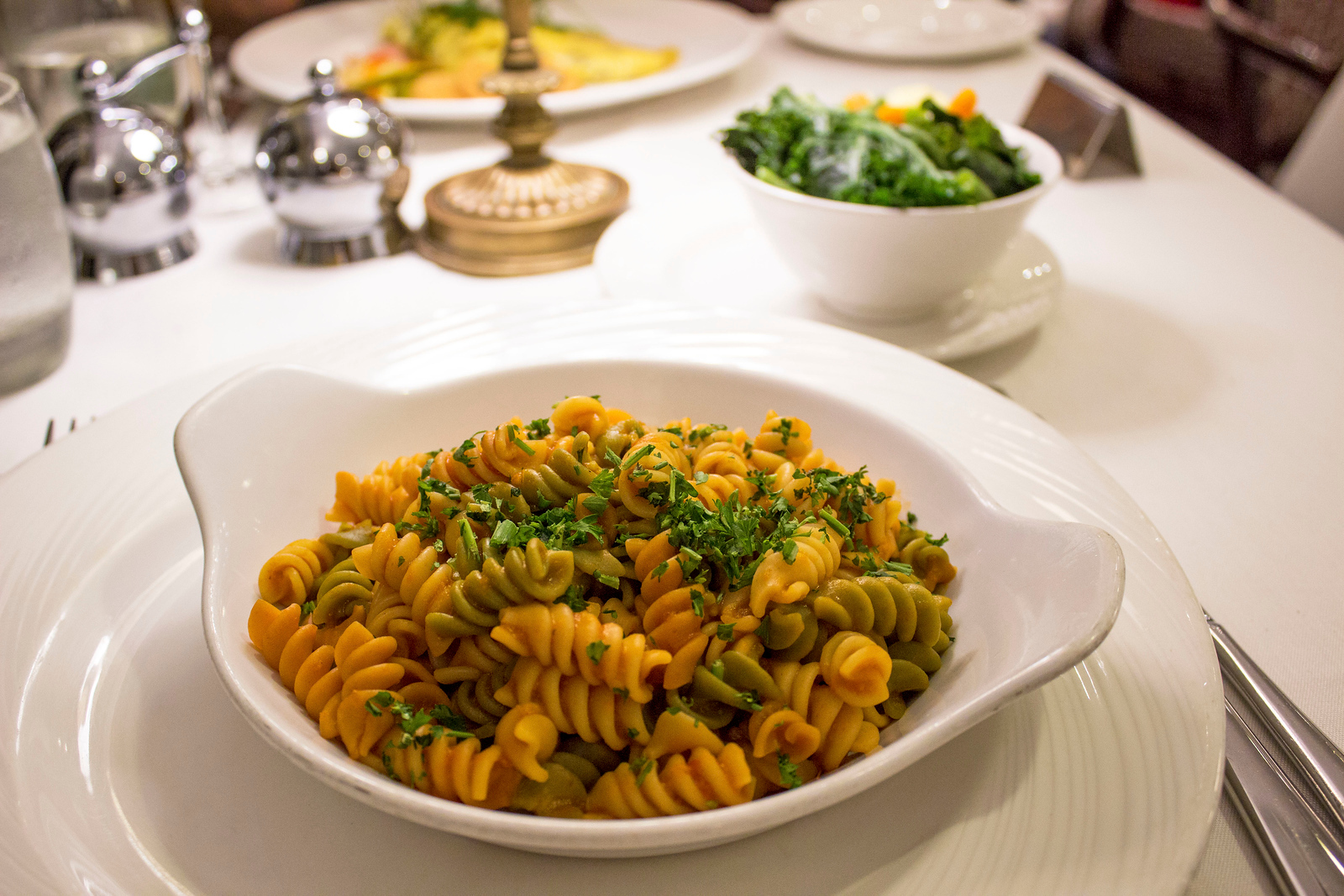 I was also given copies of the following night’s dinner menu, as well as a copy of the vegetarian/vegan special menu. I ordered my meals the night before, so I didn’t even need to worry about what I was going to eat the next day. If lunch happened to be served in the dining room the following day, I was also shown that menu to order from as well. Easy peasy!

LUNCH IN THE DINING ROOM

Lunch in the dining room was always a treat. Even though the buffet was quick and easy, the dining experience was enhanced when the food was prepared to order in the kitchen. While eating at the buffet meant that you could dine at a table outdoors with ocean views, the views in the dining room weren’t too shabby either. We were usually seated by a window with scenery of the crashing waves rolling by.

As we had two sea days on the ship, we had lunch in the dining room twice.

The first time, I brought in a hibiscus iced tea with me that I purchased at the cafe. It was one of my favorite drinks on the ship as it was quite refreshing. Robyn and I both ordered similar meals – a salad to start, and the falafel wrap with roasted potatoes. Other passengers dining nearby noticed how awesome our falafel wraps looked and ordered them, too! They were very yummy. 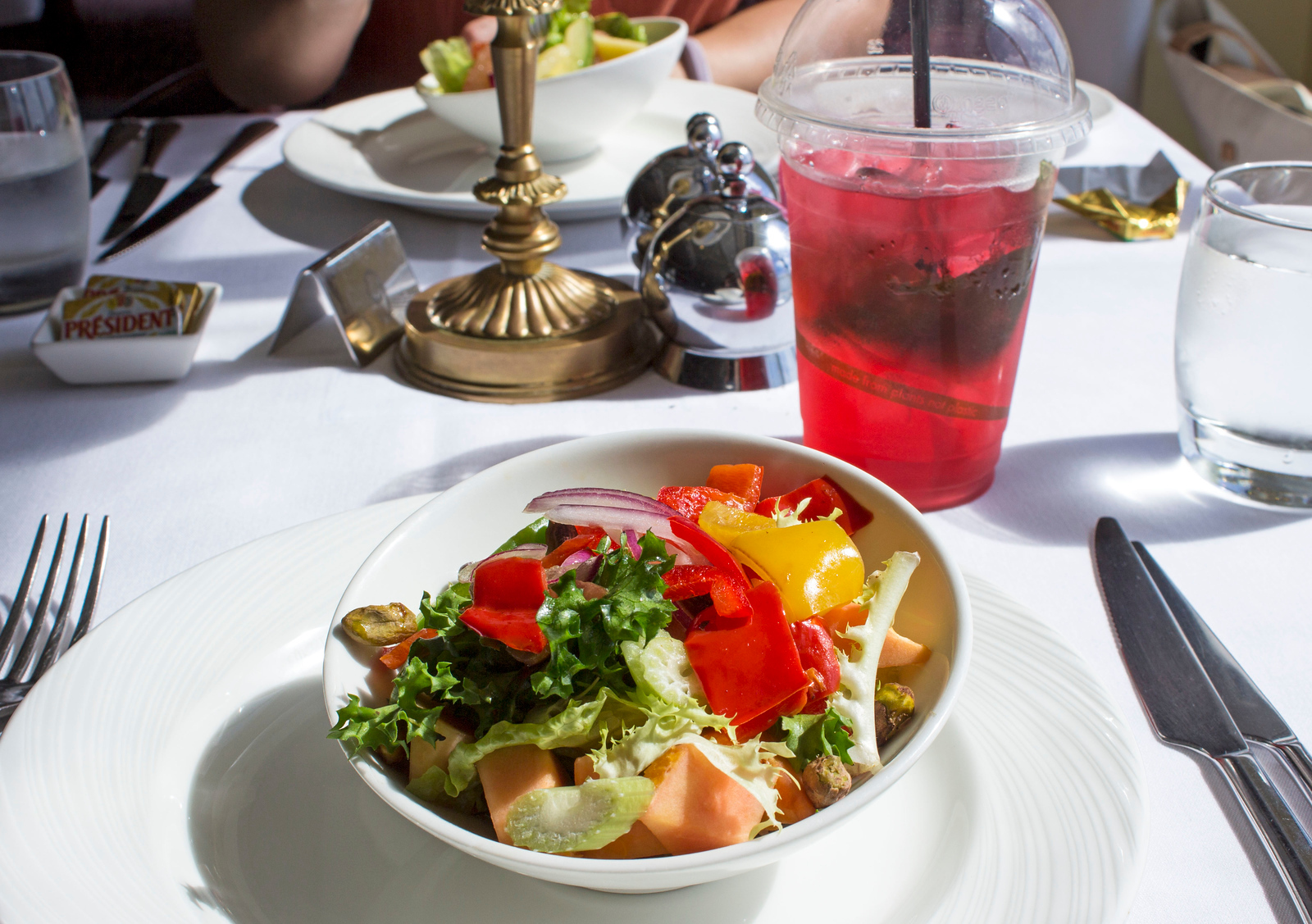 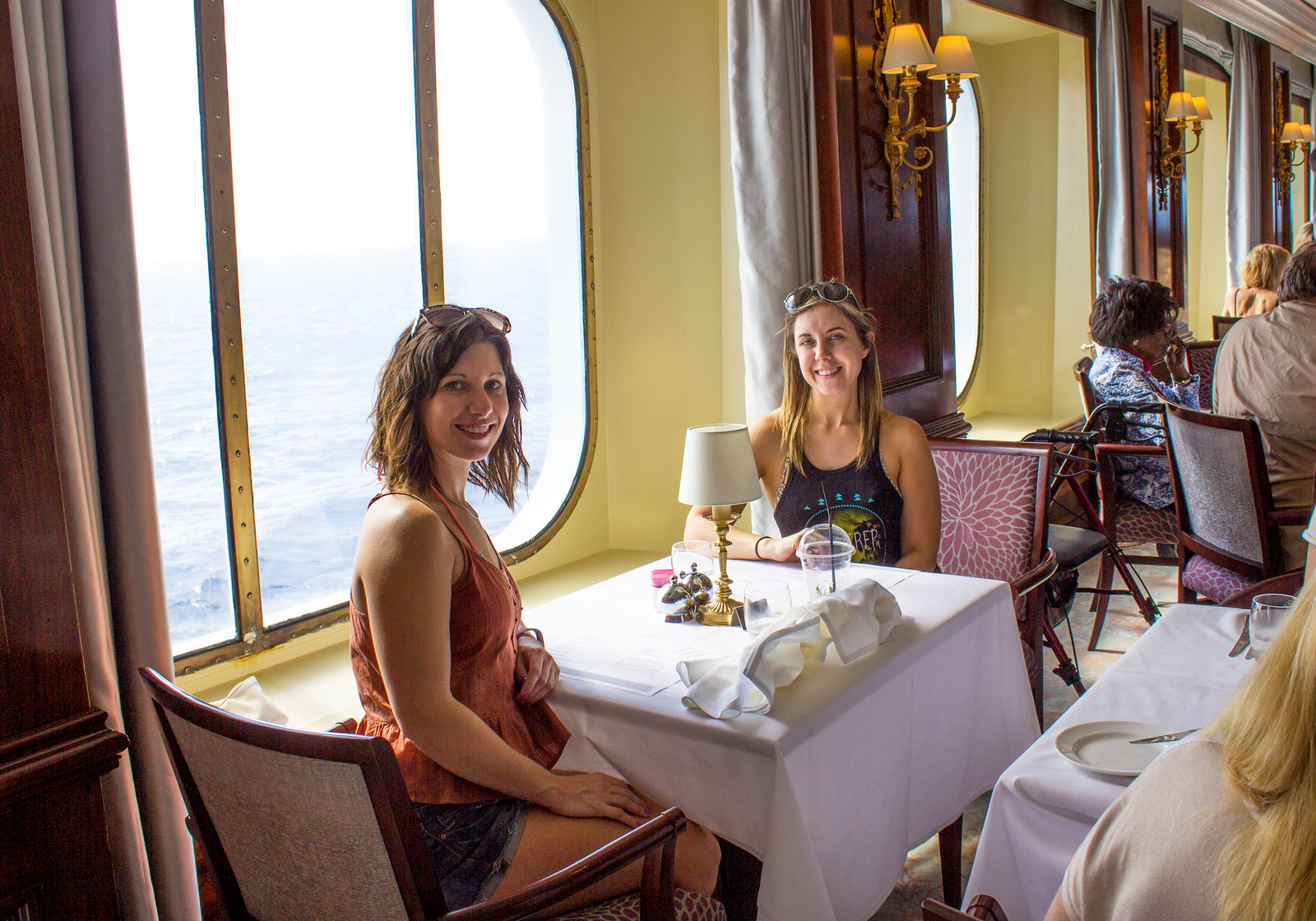 When we dined again for lunch, I opted for the salad, the tarragon soup, and a pesto pasta. They ensured that the pesto had no cheese in it, and it was topped with mushrooms. Yum! The Maitre d’Hotel and the wait staff were super attentive. Our meals always arrived on a timely manner, even though mine were specially prepared. 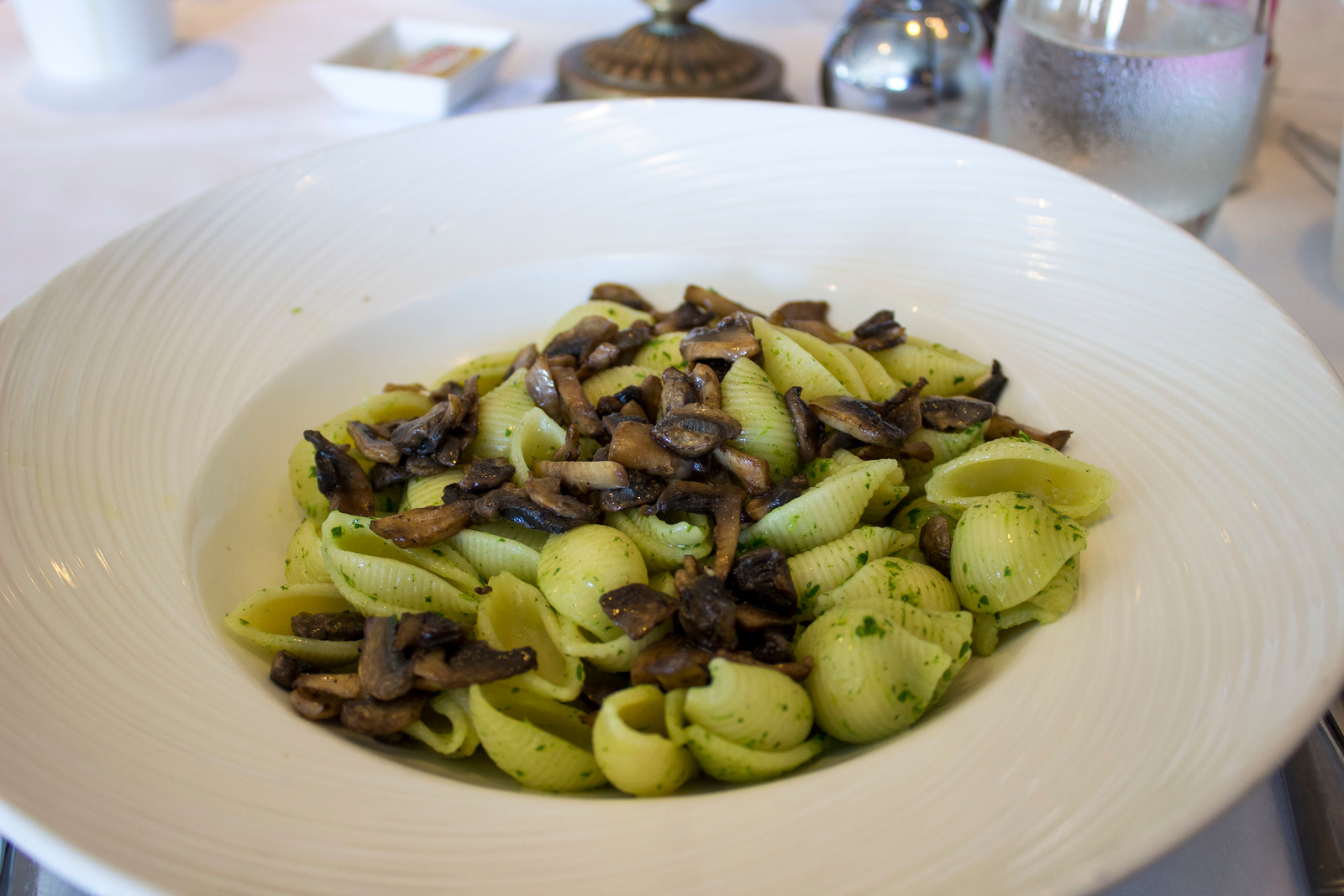 DINNER IN THE DINING ROOM

Here’s what I ate for the remainder of the cruise in the Pacific Dining Room. I ordered mostly from the vegan menu, but some of my dishes were modified from the regular menu’s vegetarian selection. You’ll always have a bunch of choices every night with a great variety of international cuisine. 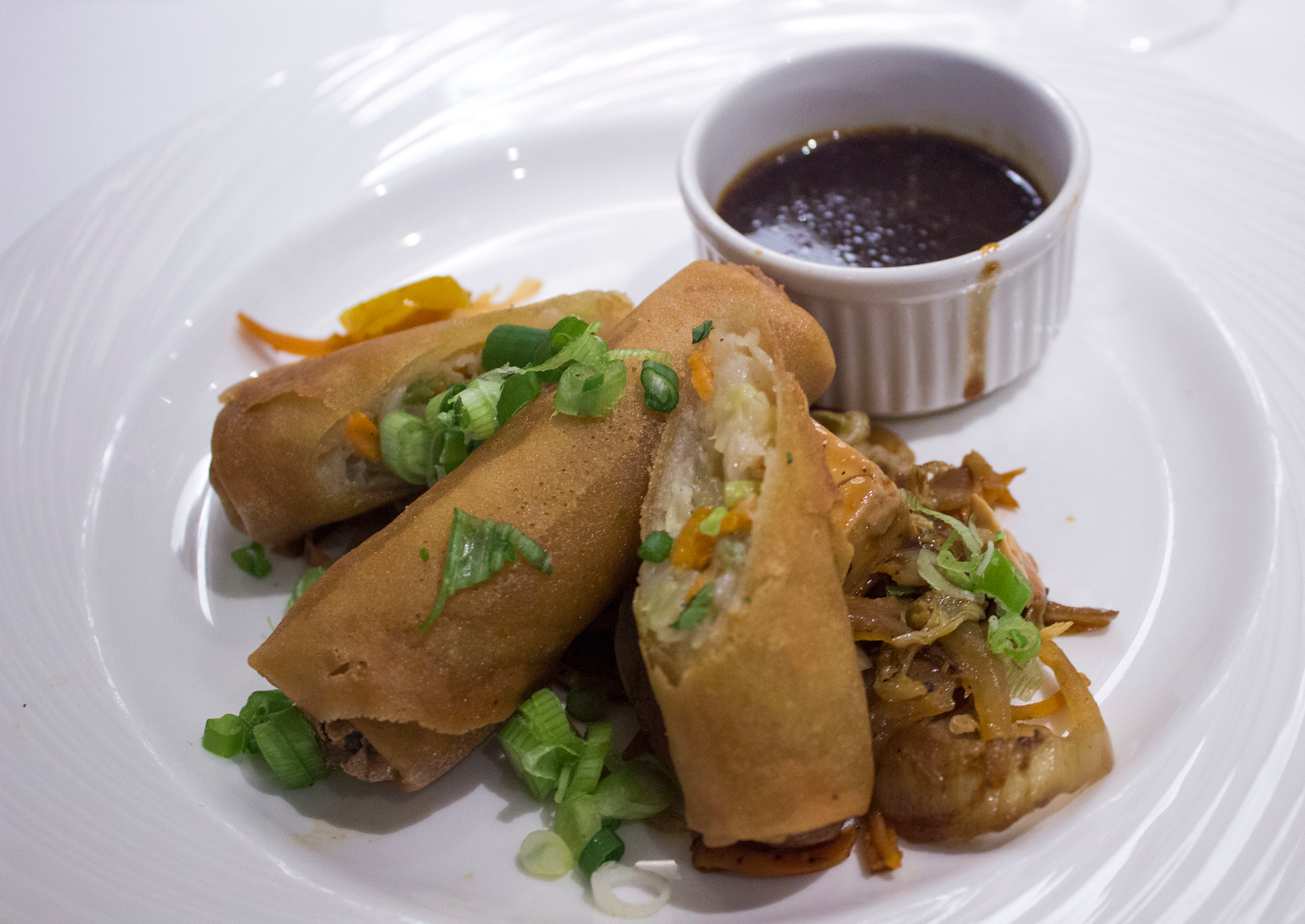 I didn’t once eat fruit for dessert on the Fathom Adonia. I think it’s a long running joke between vegans that we’ll always get served a bowl of fruit as a dessert – it’s what usually happens! Not that there’s anything wrong with fruit, but sometimes you want a real….not so healthy dessert.

On the Adonia, there was always fruit sorbet for dessert every night. In addition, on the vegetarian/vegan menu, there was baklava for dessert! I was really excited to see this on the menu, and I ordered it a whole bunch of times. I received three giant pieces of baklava, and was never quite able to finish it. Even if you’re not vegan, see if you can order the baklava one night. It’s delicious! 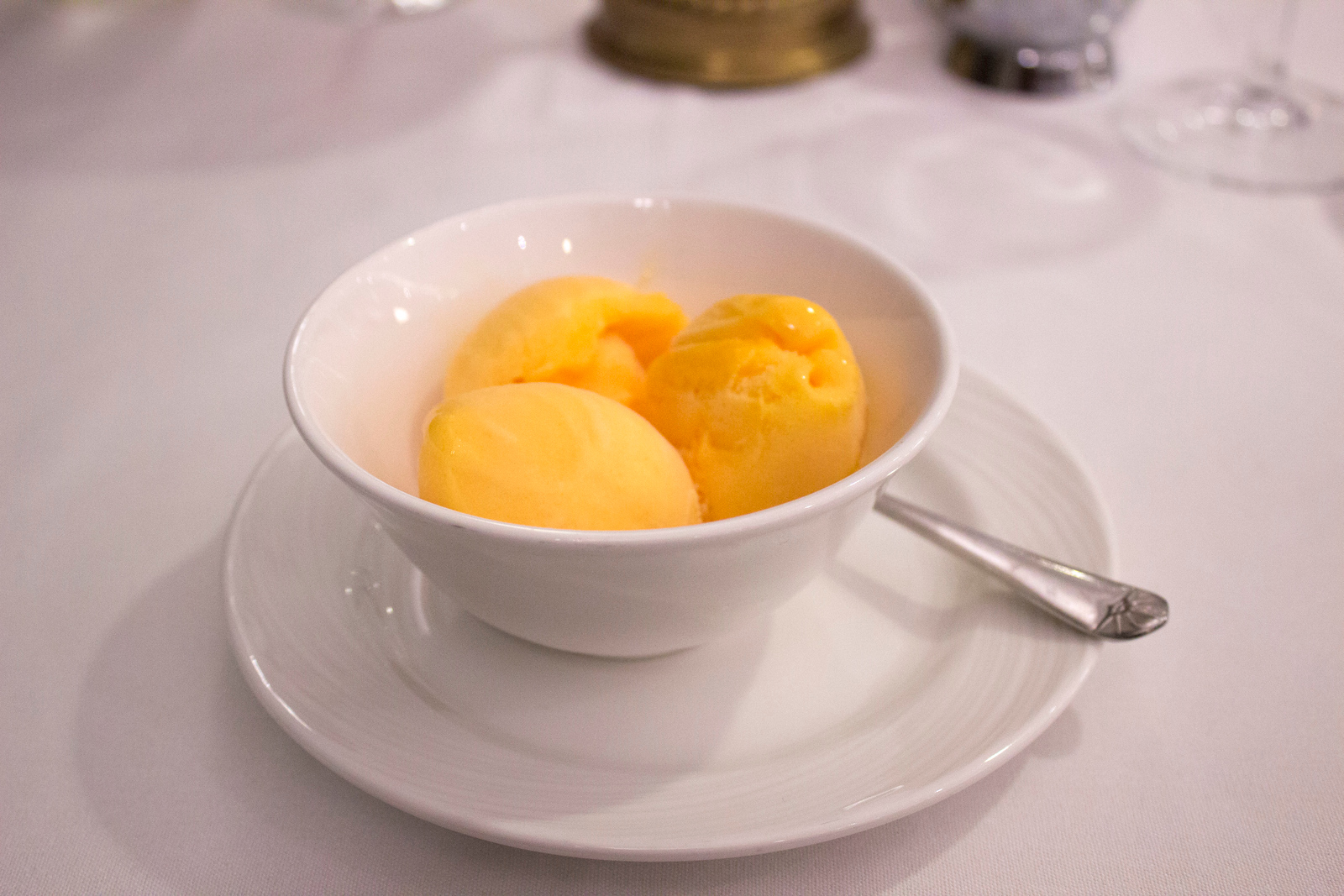 It was very easy to eat vegan food on the Fathom Adonia. With the extra vegan dining menu, it was perhaps the most vegan-friendly cruise I’ve ever traveled on. I was absolutely thrilled with the food on the ship. Not only was it a treat to not have to cook, do dishes, buy groceries, or deal with any of those regular chores…but the food also tasted amazing.

By following the few simple instructions in this Fathom Cruises vegan guide, you’ll be able to easily maintain a vegan diet (or any other special diet if you’ve got preferences or allergies) on this cruise. 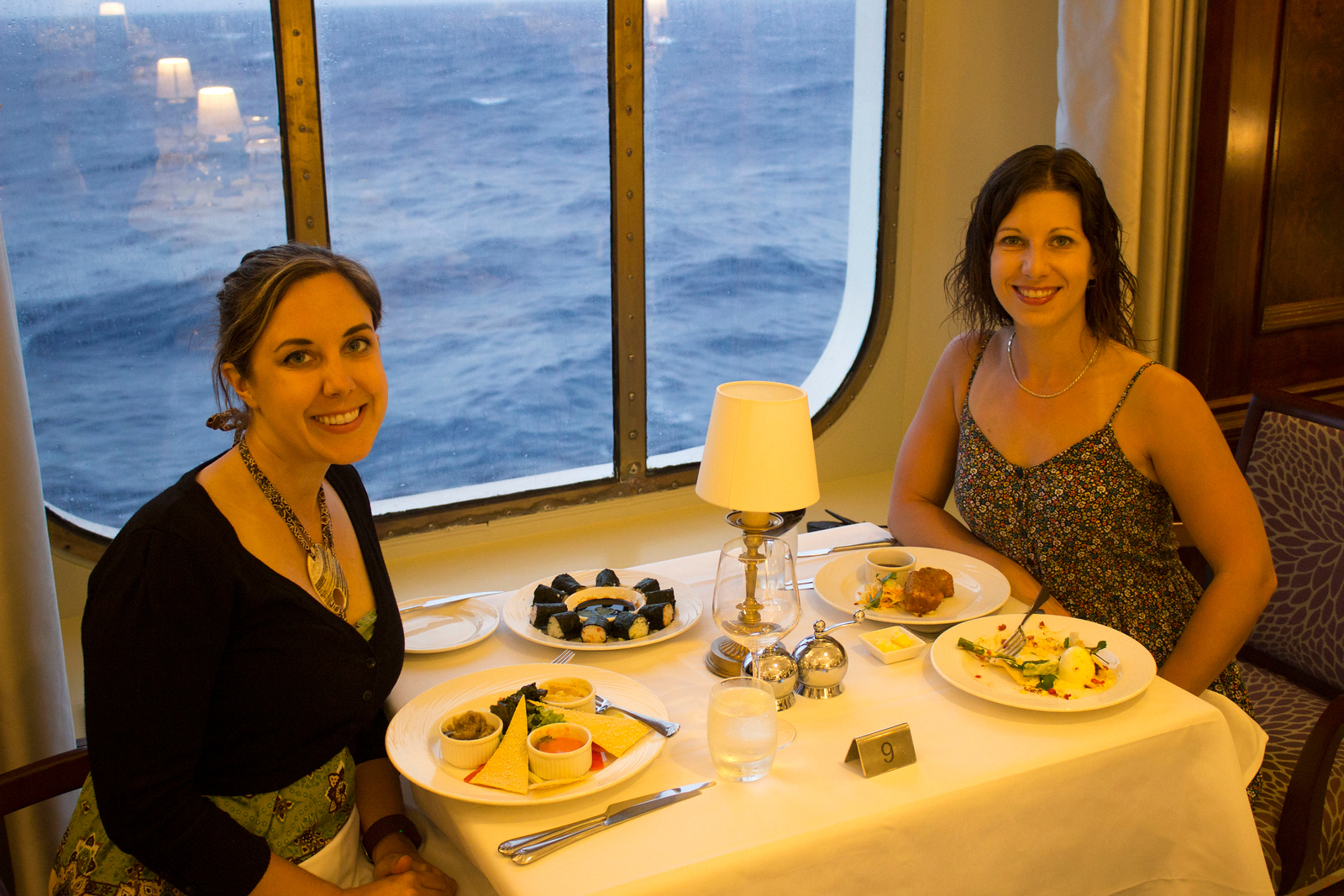 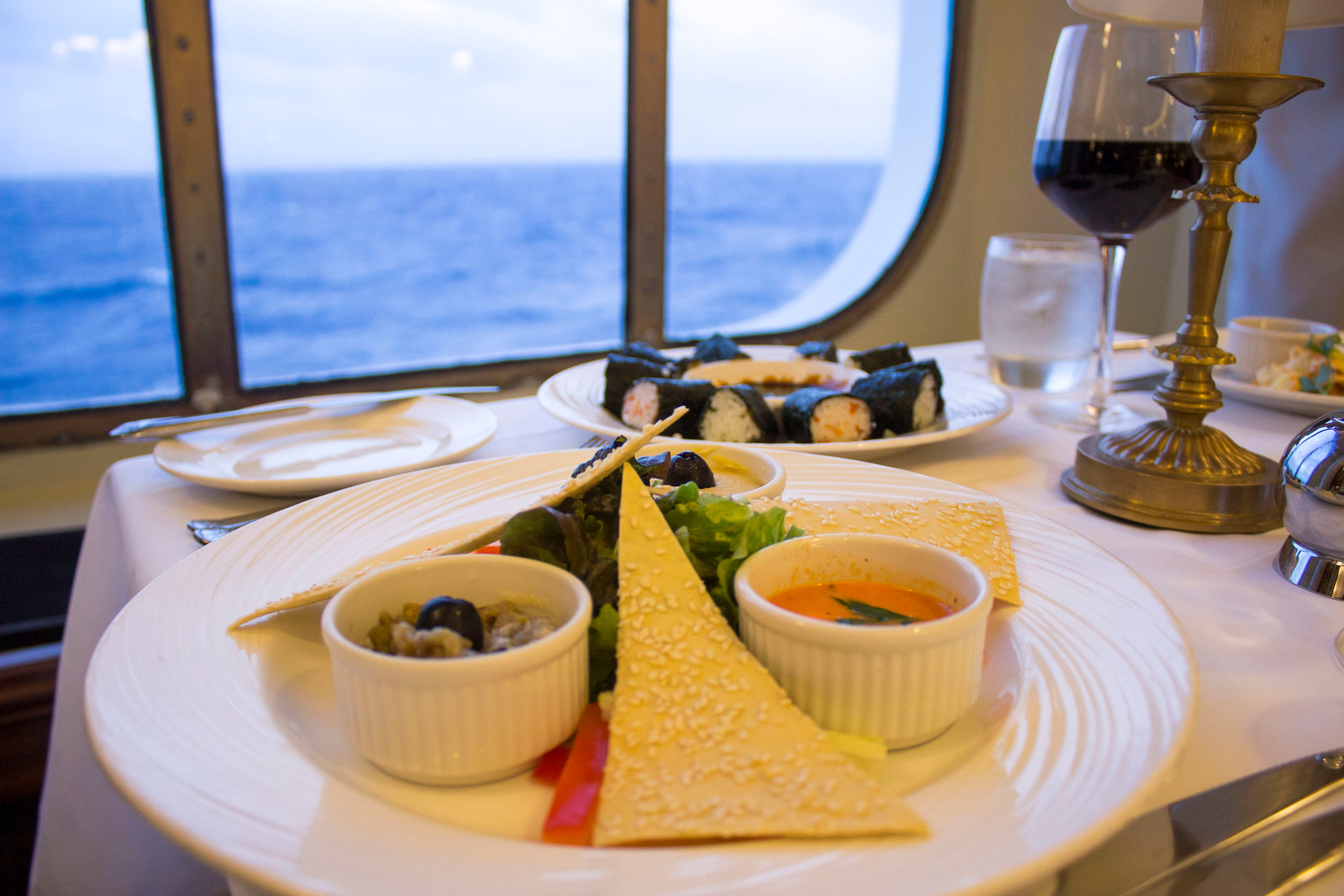 Want to see more pictures of food, as well as my entire experience on board the Fathom Adonia? Check out my travel photo album of the whole cruise! You can also buy prints, photos, housewares made from the photographs, and more! 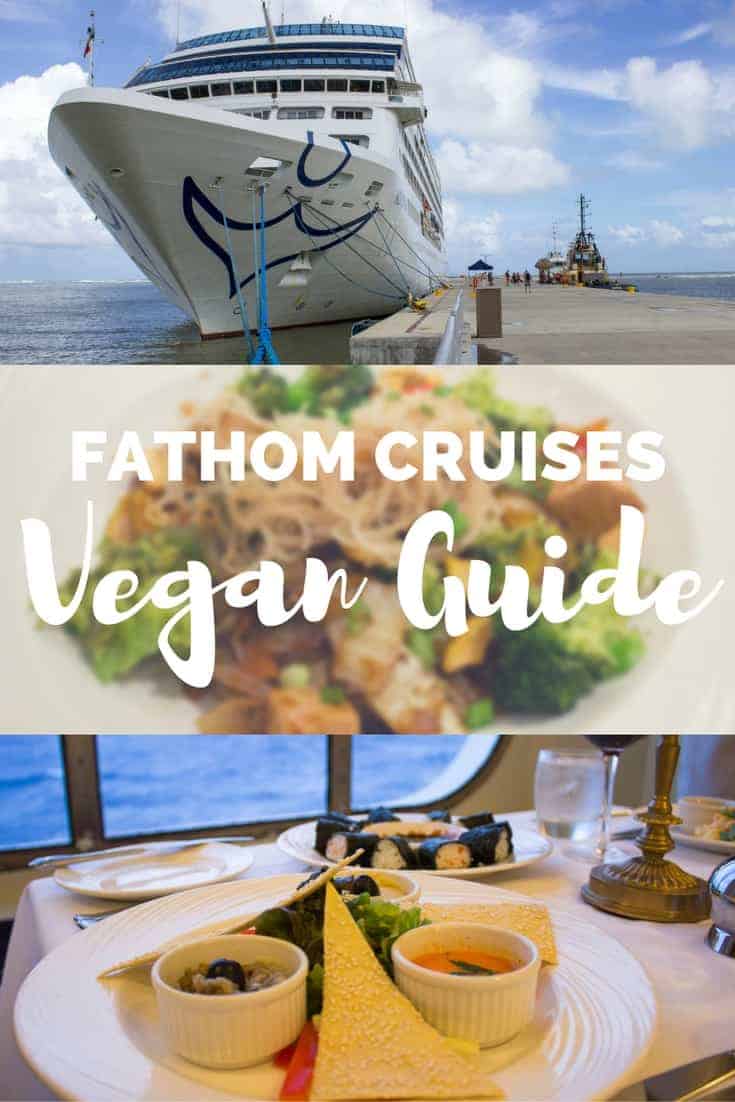 Disclaimer: Thank you so much to Fathom to hosting my cruise. My opinions, as always, are entirely my own.

Do you have any experiences with special diets on cruises? What’s the best cruise you’ve been on for vegan, vegetarian, or your favorite foods?