It was Friday the 13th and our final day aboard the Caribbean Princess cruise ship. Despite the date, we didn’t have any bad luck on the last day of our vacation. After four exciting days at the ports of Princess Cays (Bahamas), St. Maarten, St. Thomas, and Grand Turk, we were ready to unwind and enjoy our final moments in the sunshine before heading back to a wintery Canada. I decided that I was going to take full advantage of the swimming pools and deck loungers on board. Even though I tried my best to relax and do nothing on our last sea day, I think that I truly succeeded here – at least for a few hours. I spent my time at the Spa Pool, an adults-only swimming pool at the front of the ship near the ship’s spa and fitness center. For a few hours, I alternated between reading a book on the deck lounger in the sunshine and going for a dip in the pool. Every time I started to feel too hot, I’d jump in the pool. It was the perfect combination of feeling refreshed and feeling the warmth of the sun.

Robyn and I grabbed some lunch at the Cafe Caribe buffet. There were quite a few vegetarian offerings as it was an Italian-themed lunch buffet. One of the cooks was preparing pasta in oil and garlic in a skillet that was served directly onto our plates, with toppings of chili flakes and fresh parsley. I also enjoyed some onion foccacia, a big salad, and some vegetables. 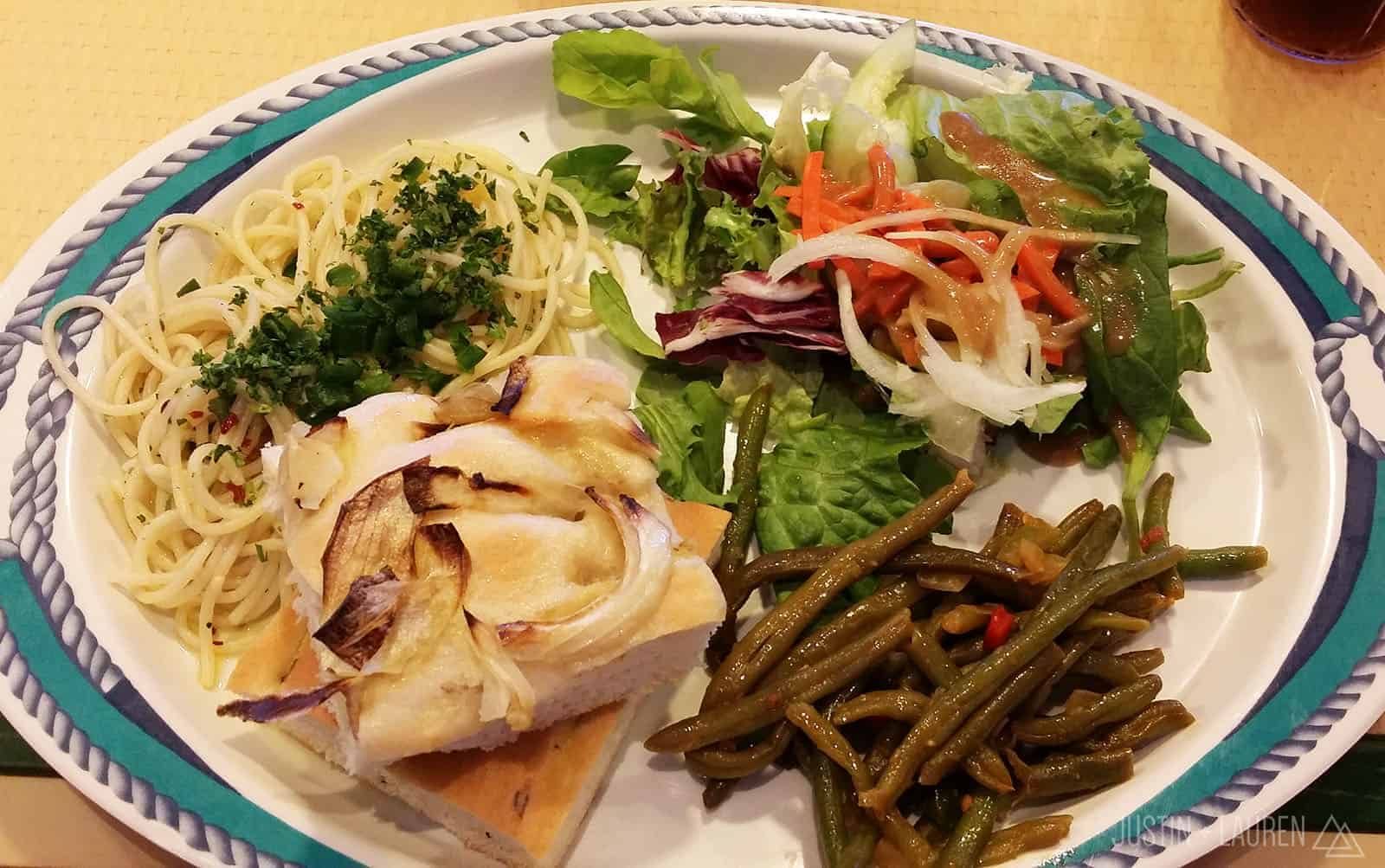 There were always plenty of vegetarian and vegan options at the buffet.

Some of the ship’s staff are so talented. We watched a man carve shapes out of ice until it became a goldfish before our eyes. He started with a 300 pound block of ice and transformed it into something so beautiful. 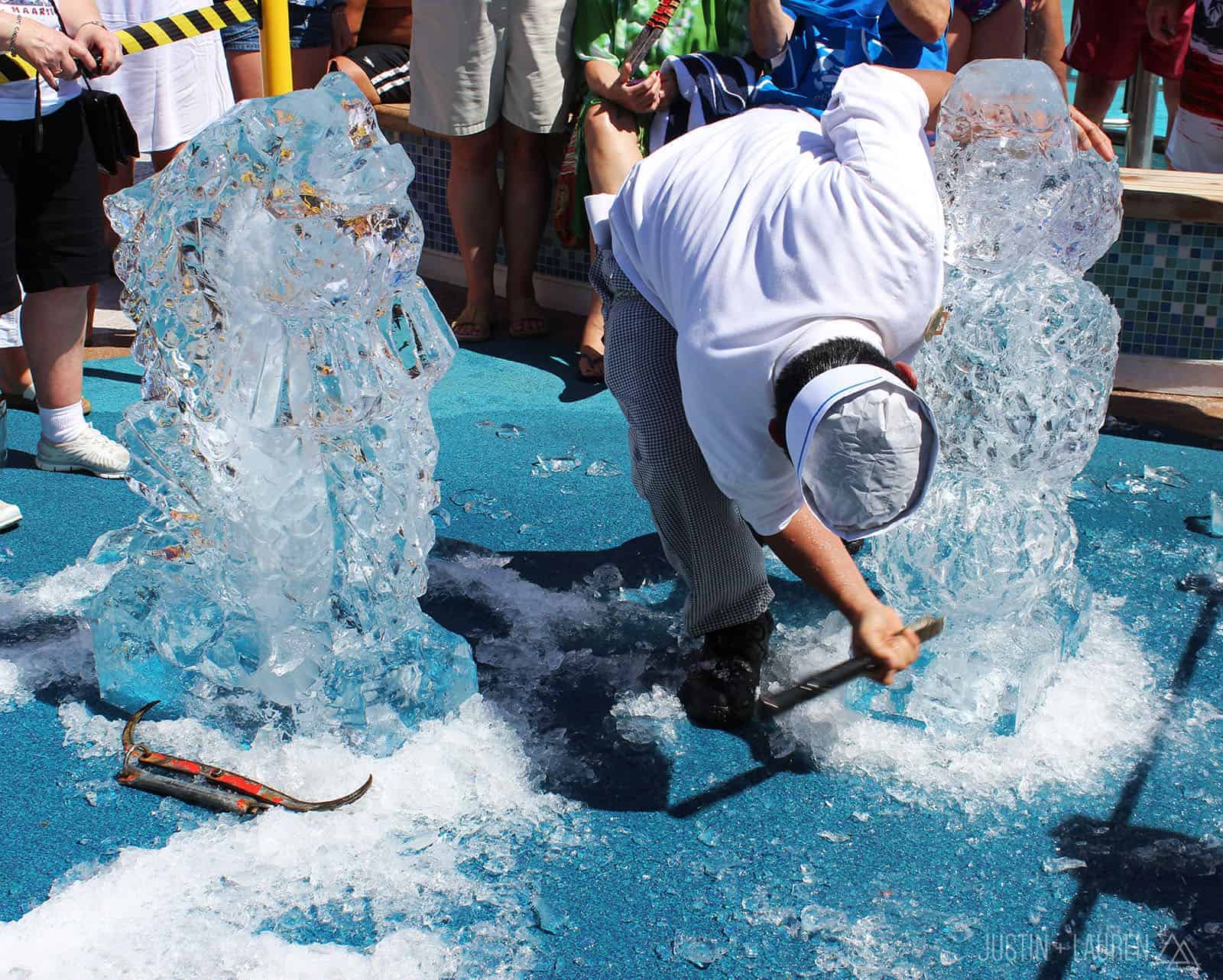 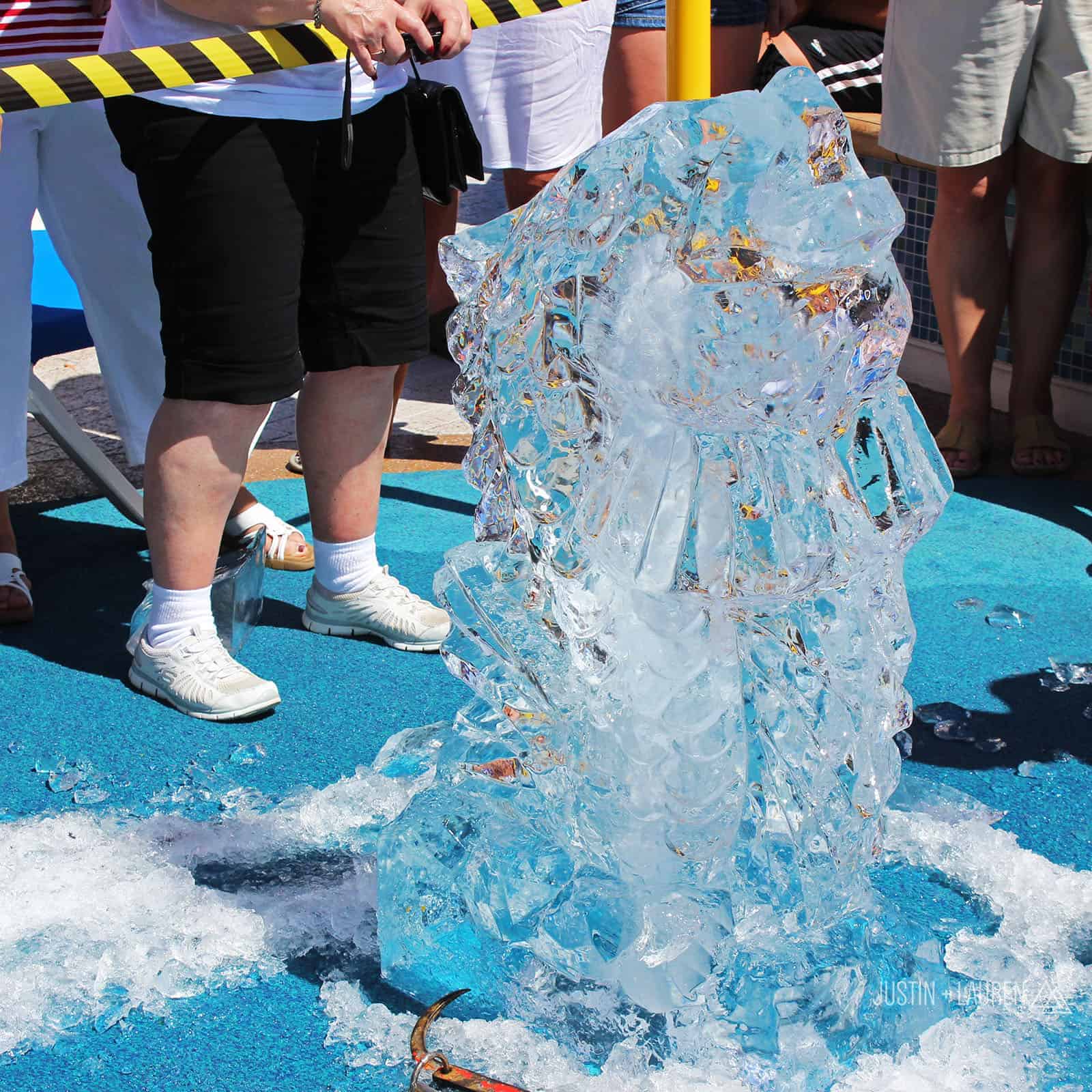 There were two wine tastings on the Caribbean Princess: one with fancier wines called the Sommelier Tasting for $25, and one regular wine tasting called Grapevines Wine Tasting for $9.50. We opted for the cheaper one figuring that we aren’t exactly wine connoisseurs, and we’d likely enjoy the lower priced one just as much. We got to taste five different wines, along with some crackers, bread, and cheese (I donated my cheese to my sister). 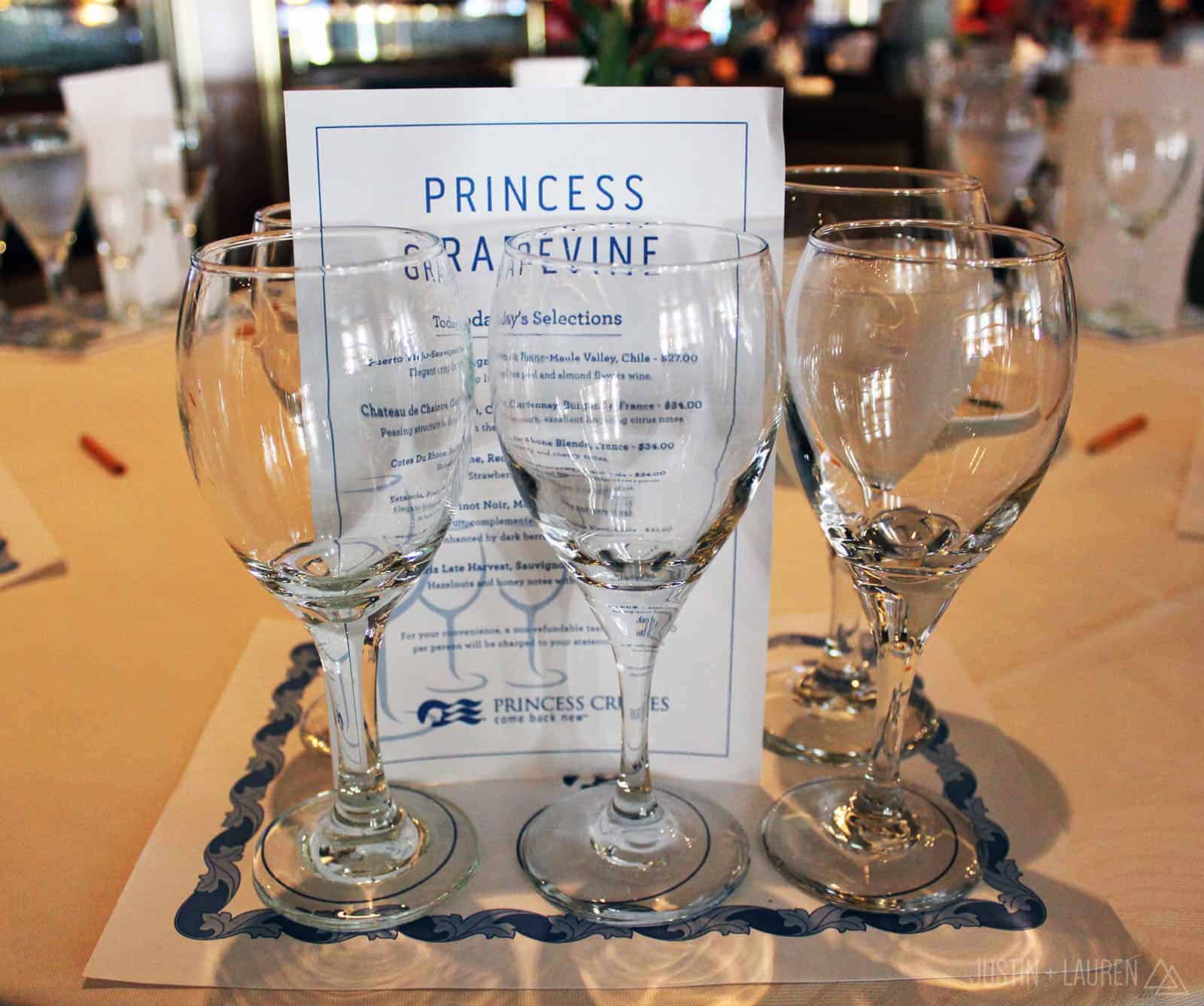 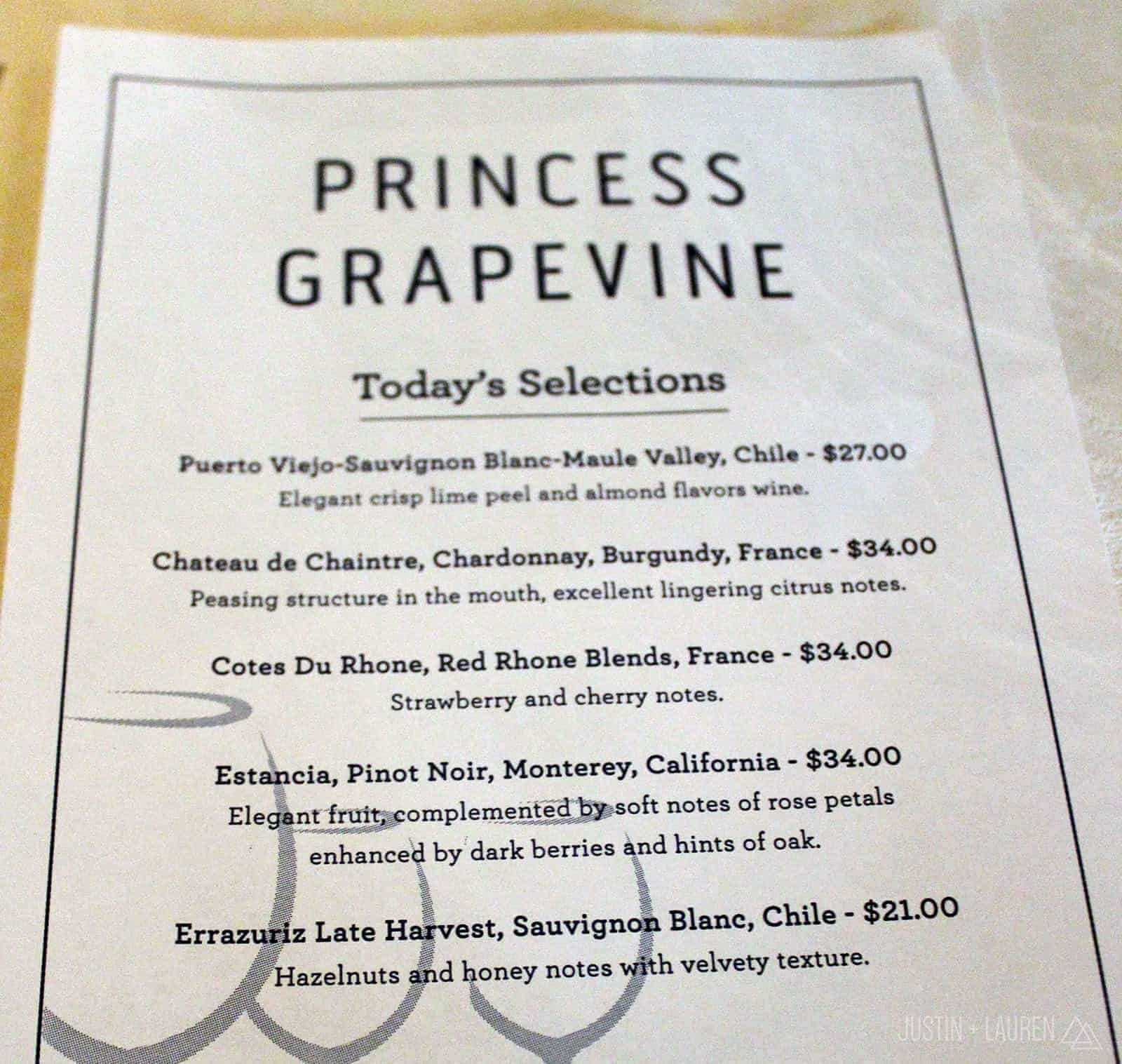 One of the enjoyable parts of the wine tasting was meeting our table mates. There were a couple of ladies from Florida and another couple from another part of the United States. We chatted a fair amount before the actual tasting started. Each wine was described in detail: where it was made, what it tasted like, and other important things to note. We tried two white wines, two red wines, and a dessert wine. Though I really liked the first white wine and Robyn enjoyed the second red wine the most, I adored the Late Harvest Sauvignon Blanc sweet wine. I loudly exclaimed how much I enjoyed it, so much that the gentleman at our table offered me his glass! He said he wasn’t one for the sweeter dessert ones, so I got to enjoy two tastings. After I took his glass and drank it, his wife stated that she would have liked to have been offered that one as she truly enjoyed it, too! Oops! My apologies! (She really didn’t mind that I had it though, they were a very sweet couple!) 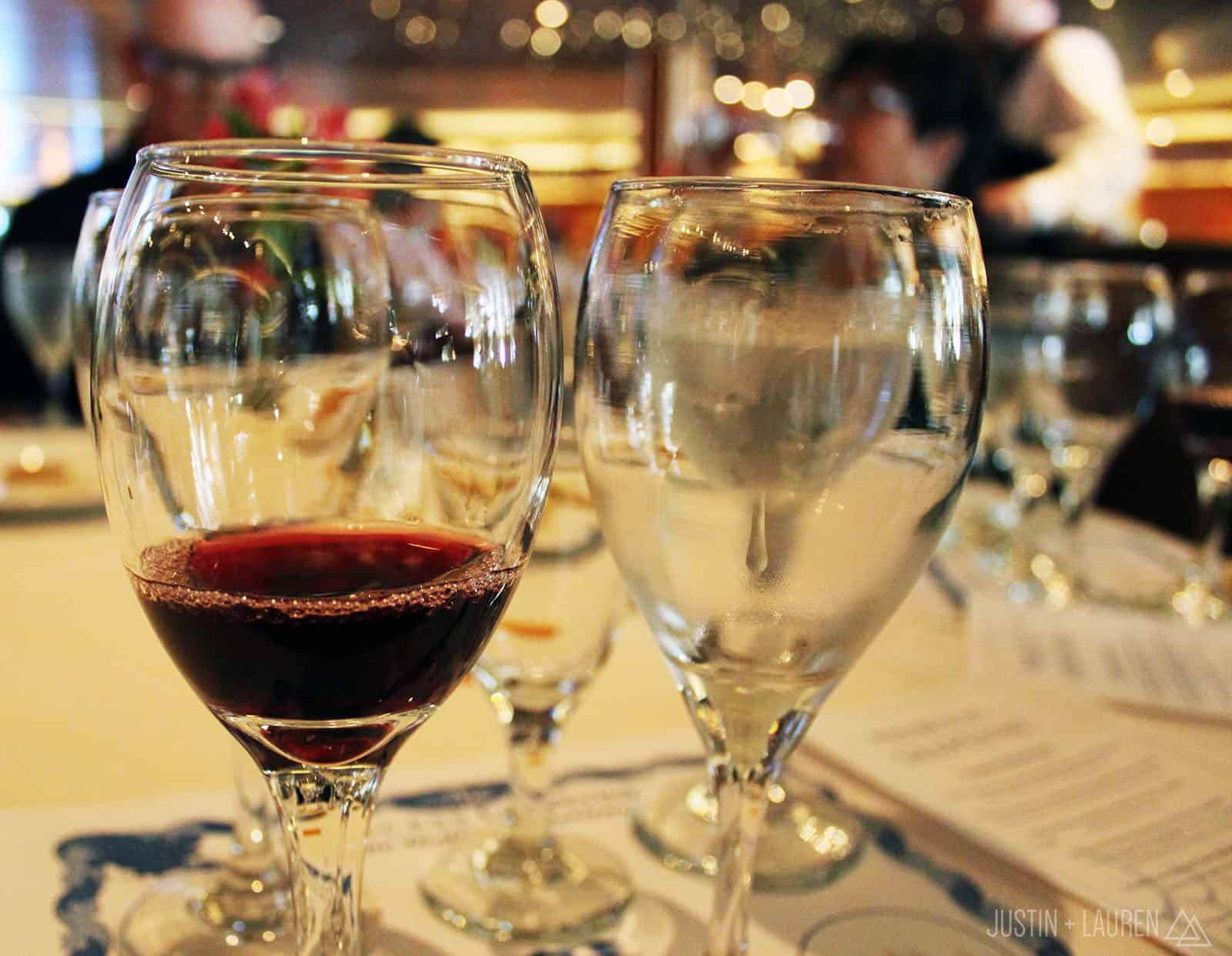 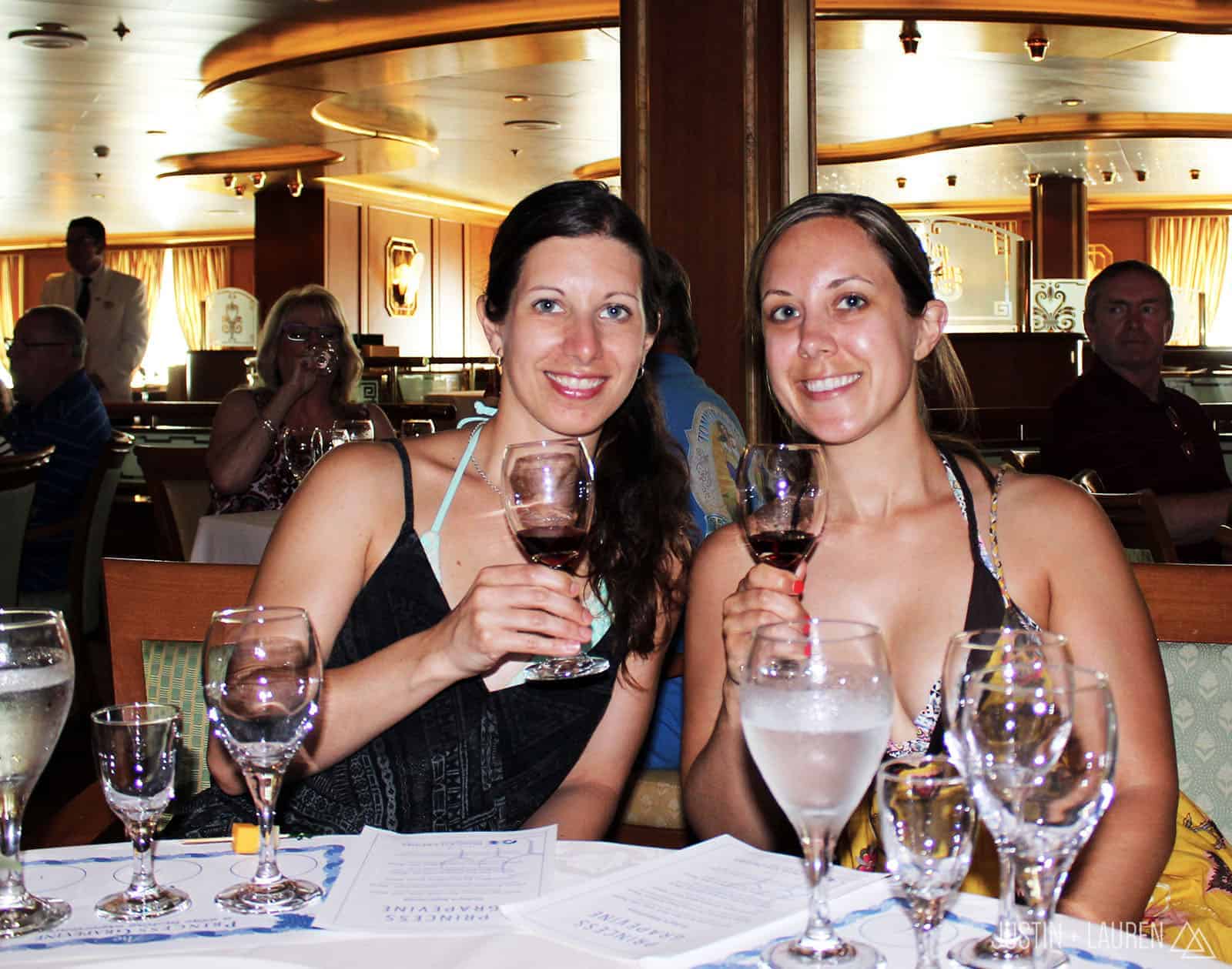 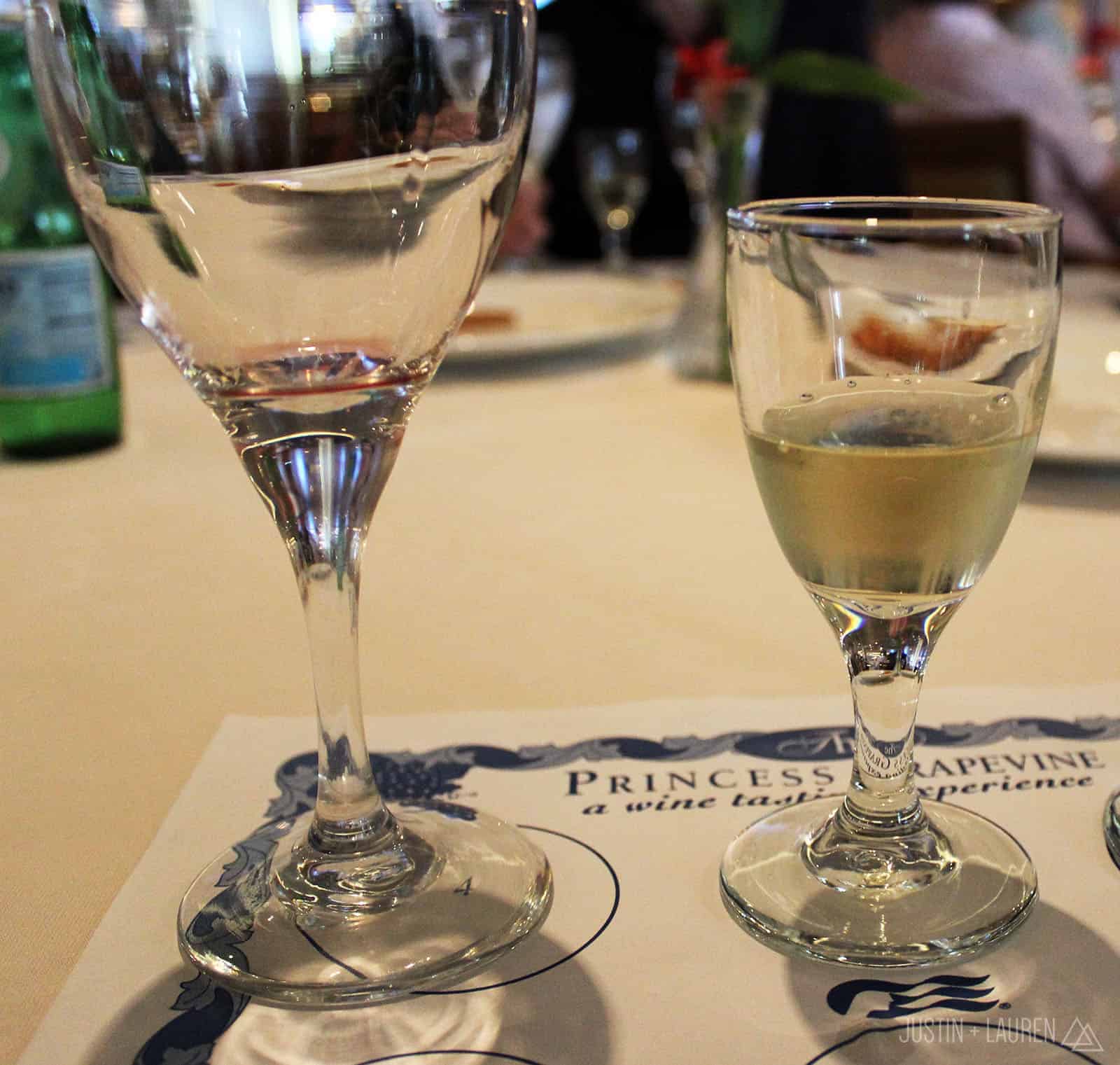 After Robyn and I attended the final jackpot round of Bingo and lost completely, we went back to our cabin and packed our suitcases. It’s always the worst part of traveling anywhere, isn’t it! We decided to walk off the ship ourselves with our luggage in hand as we were able to fully manage them on our own. Also, our flight was at 12:30pm on a Saturday, and we wanted to make sure that even if we waited in a lengthy queue for a taxi that we’d make it to the airport with lots of time to spare.

Final Meal in the Dining Room

It was time for dinner and sadly, it was our last meal in the Island Dining Room. The head waiter, Joao surprised us once again with some extra items to make our meal special and memorable. Right away, he whisked over to our table with a couple of those pina colada “soups” that we had been drinking throughout the cruise (they were more like a frozen smoothie). I ordered an appetizer directly from the menu, which was one of Princess’ “Daily Street Food Specials” – the West Indies Roti Wrap. It was a Jamaican Spiced Rice & Peas wrap with spring onions, tomatoes, and chilis. It was a bit spicy, but not overly so, and quite delicious. I also ordered a salad, which was the Grilled Zucchini and Eggplant Salad with sun-dried tomatoes, chives, and hearts of romaine. For the main course, I had the Eggplant and Basmati Rice Timbale – crispy fritters, mango cheek, and a spicy tomato sauce. It was yummy, though I enjoyed the components of this dish better separately rather than together. I’m not so sure that the sweetness of the mango worked very well with a spicy tomato sauce. However, I really liked those fritters. It was still very tasty and I happily finished the meal. I was so thankful to have been spoiled with delicious vegan food throughout the entire cruise. 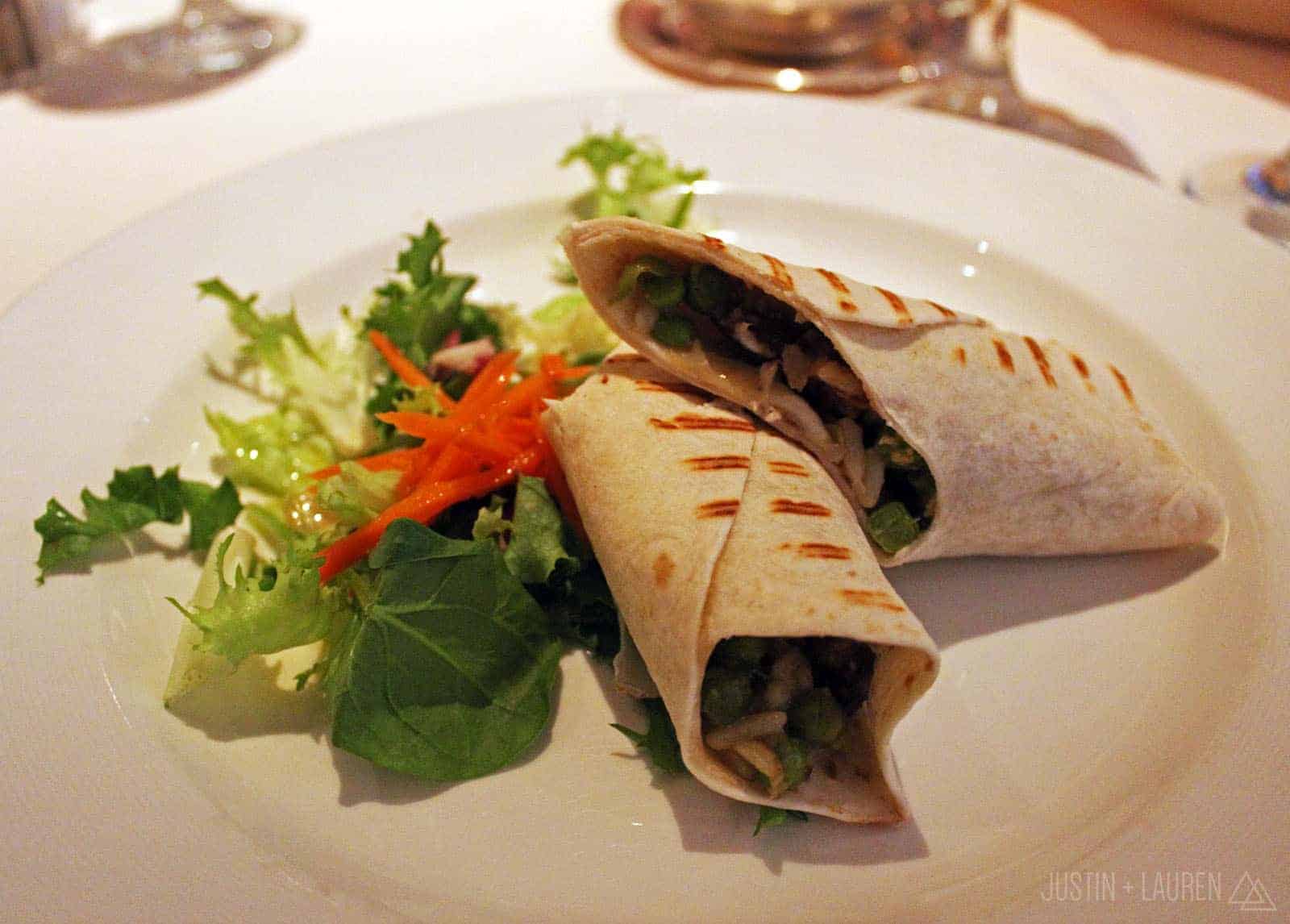 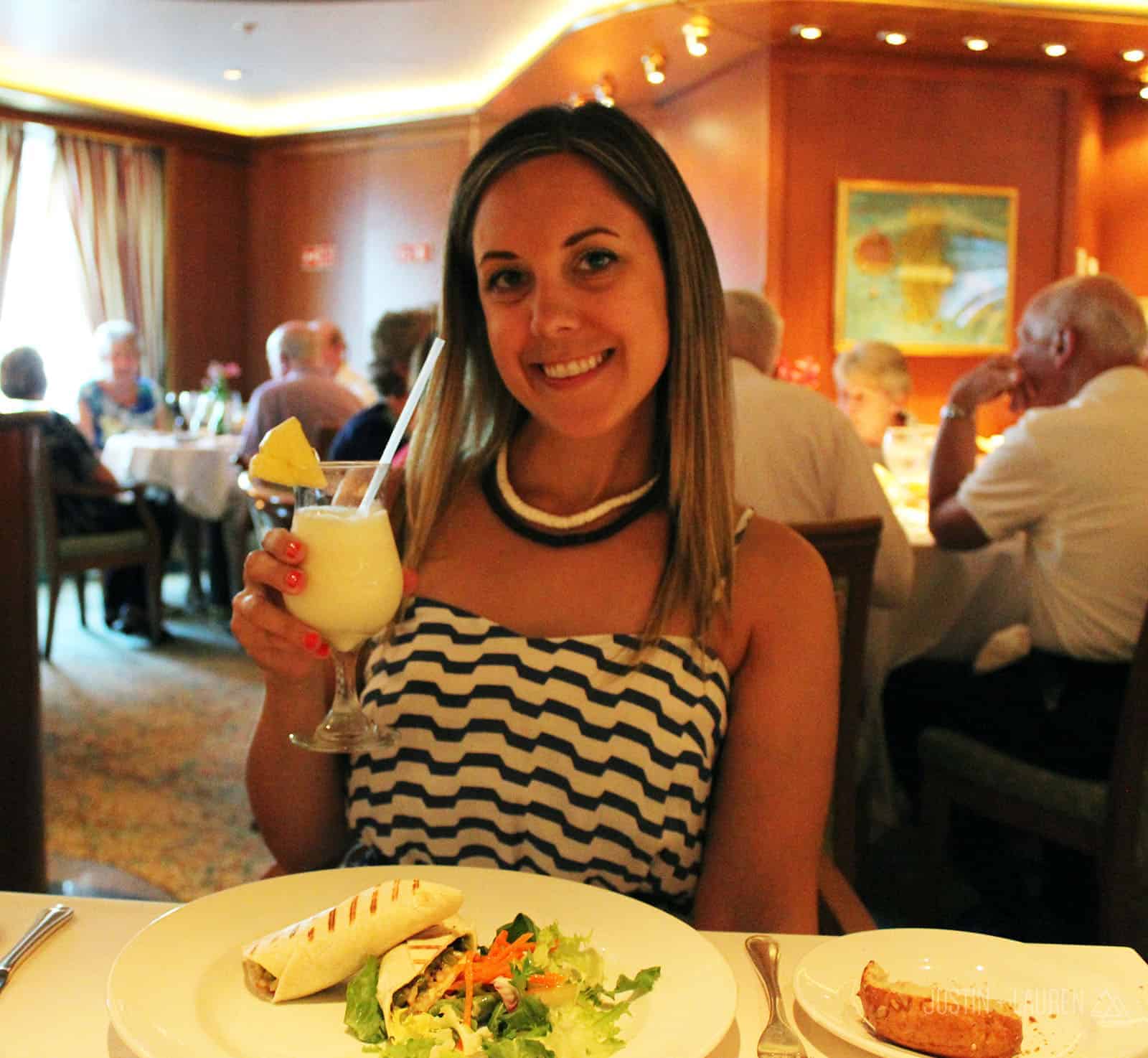 Lauren and the Pina Colada Soup 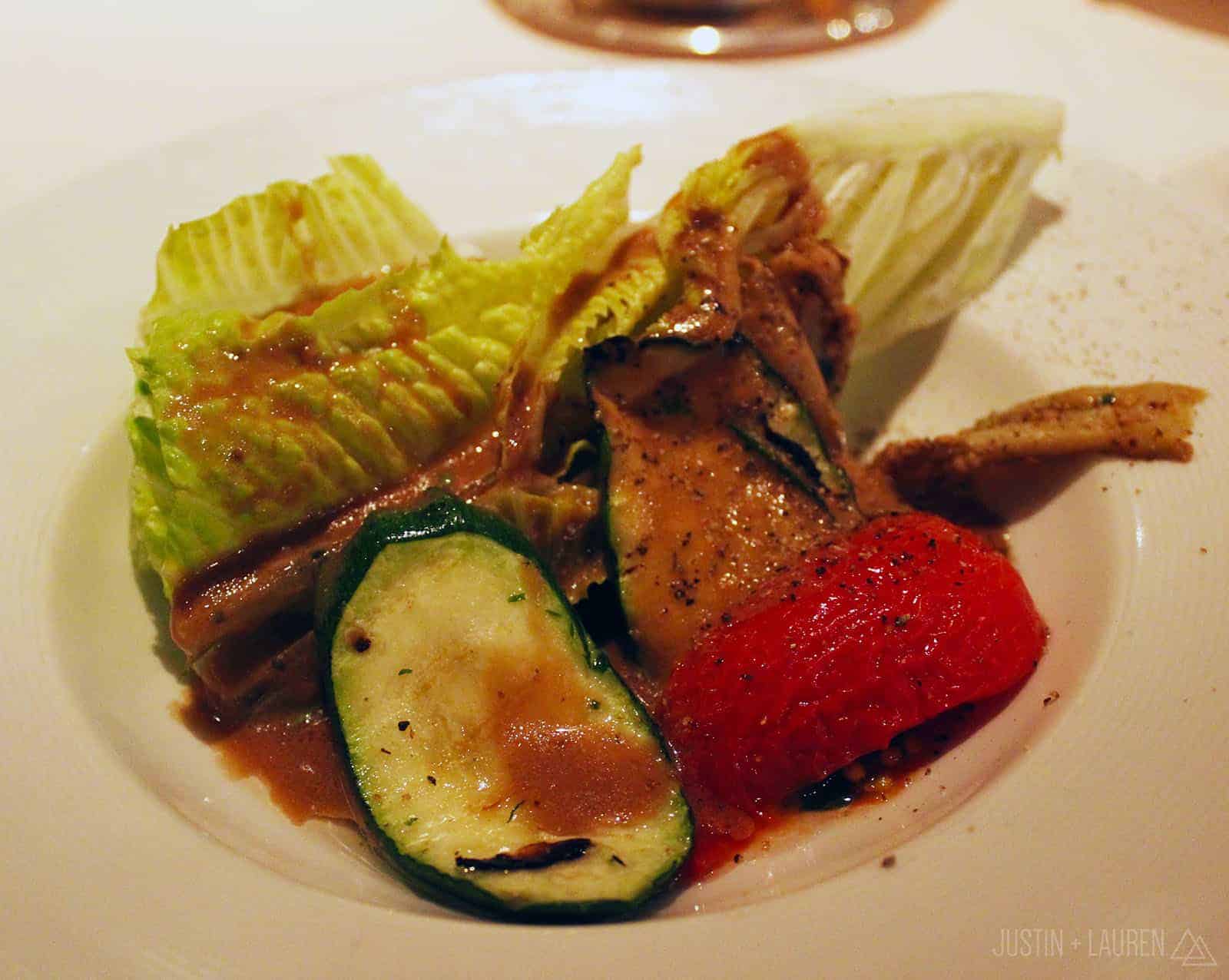 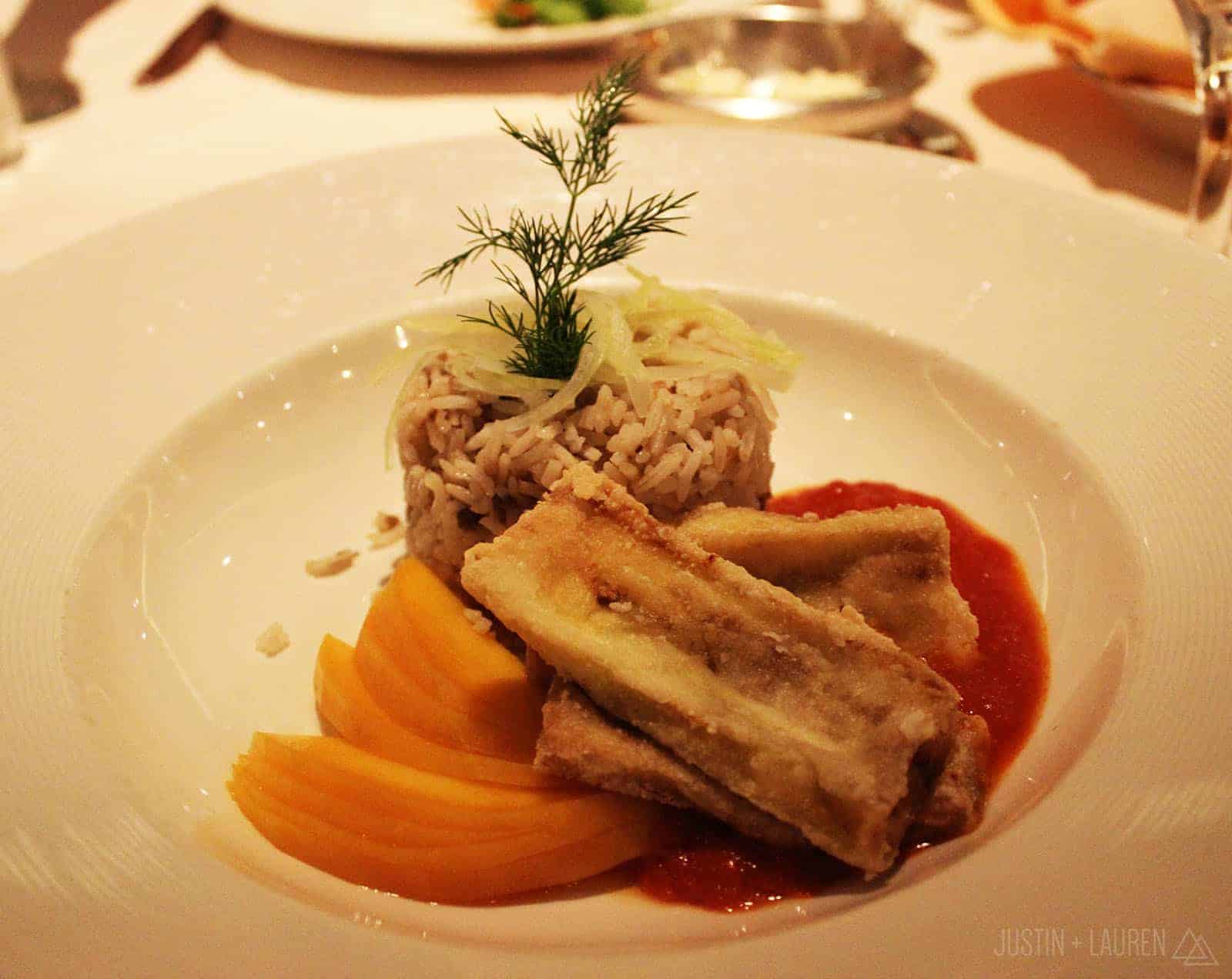 The Rest of the Night

The rest of our evening was kept fairly low key. We actually planted ourselves at a table in Club Fusion and stayed there for the remainder of the evening. There was a game show called Quest, and though we didn’t participate, we had fun watching those who had volunteered themselves. Groups were formed and it was essentially a scavenger hunt in the lounge. The host would call out an item that she was looking for and someone from the group would have to find that item and run up to the front to gain a point. Some of the questions were quite clever, such as, “a picture of the White House” (you could find that on money) or “a piece of fruit” (could find it in a person’s cocktail perhaps). The most hilarious choice was when the teams had to bring a bald man up to the front with them, and one had to remain at the front. The next quest was to have a man wearing lipstick to come to the front and plant a kiss on the bald man’s head! It was really just silly and funny to watch.

The next event at Club Fusion was the Passenger Talent Show. This could be quite hit or miss depending on the talents of the passengers. One passenger was a younger kid who played piano, a girl who performed a rap, and there were a couple of singers. One man had written his own song to sing and play on the piano. It was a funny story told in song and he won the show.

We had a really fun time on our cruise vacation! The time went by really fast, but it was a great holiday with time for both adventures and relaxation. Plus, I got to eat some really great food thanks to the excellent cruise ship staff who made sure that I was happy and well-fed with plant-based meals. 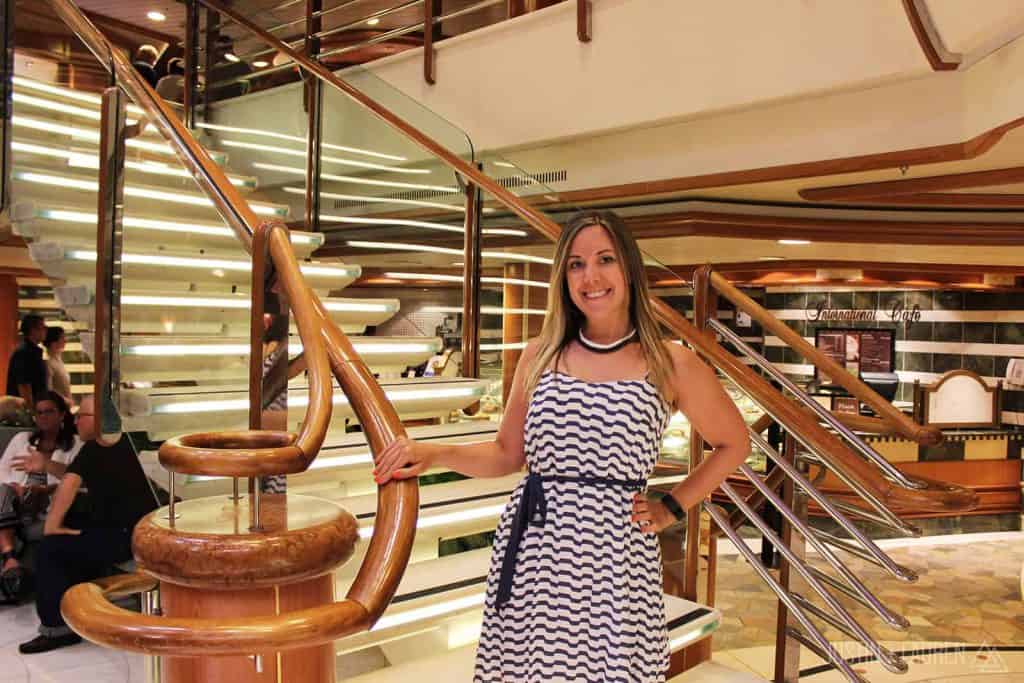 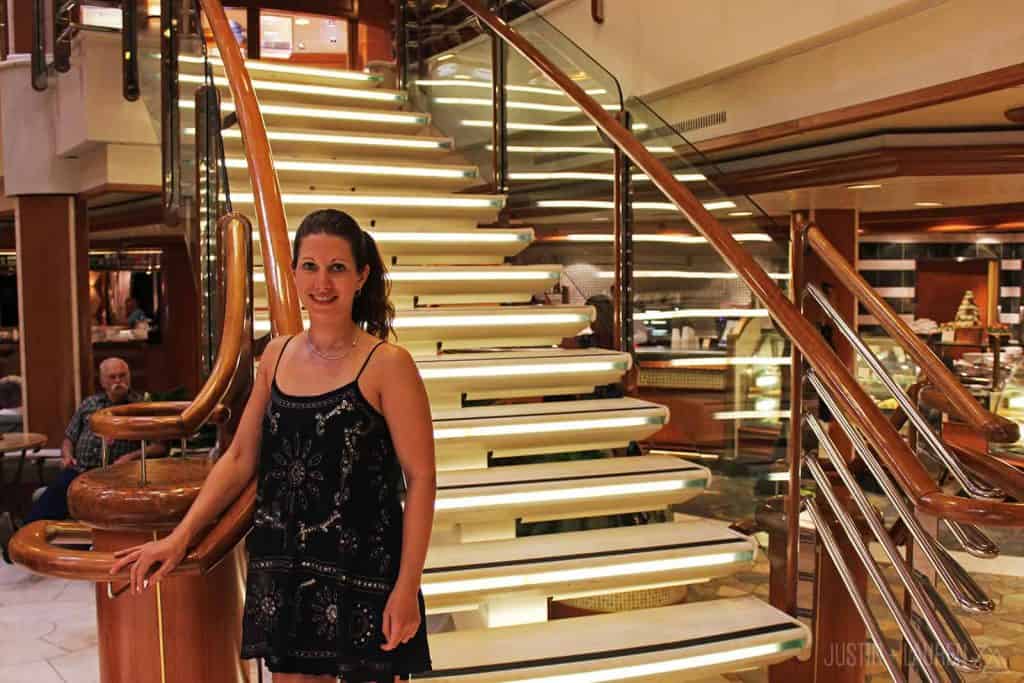 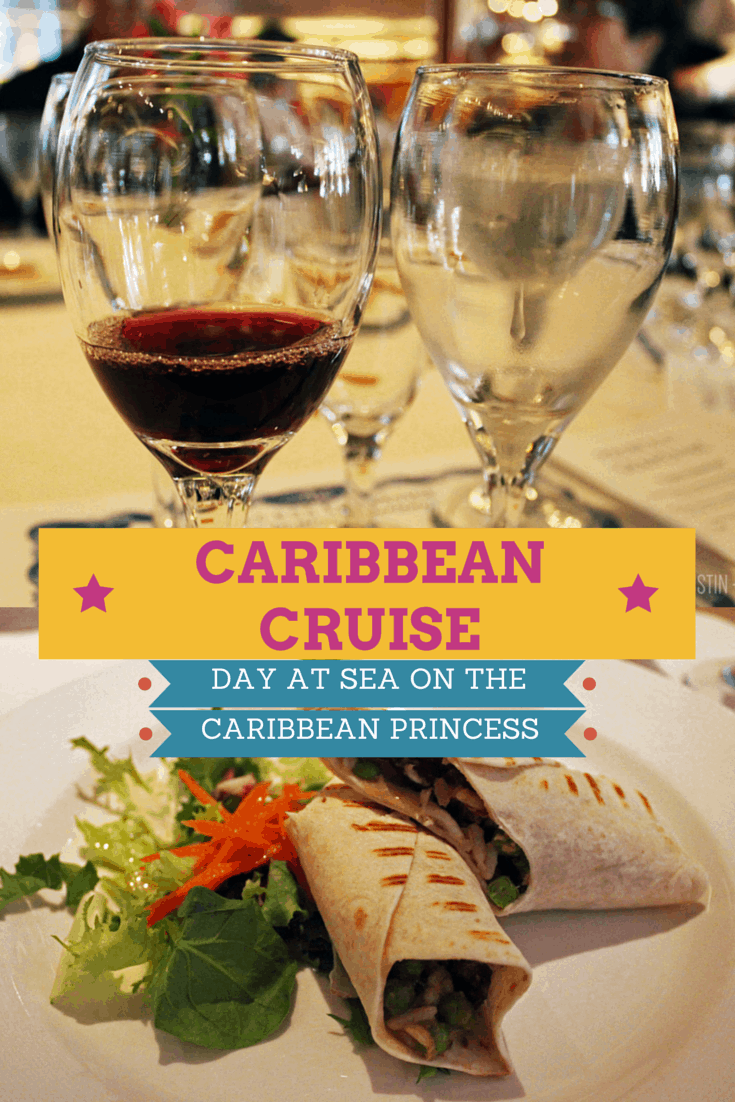 PIN THIS ARTICLE to your Pinterest account by clicking the little button in the top left corner of this image!

Jamie | North of Something

Wow the food looks amazing. I wish I was there right now!

Oooh, wine tasting. Well, someone has to do the hard work I suppose ;-) Thank you for hosting another great linkup!

Great read Lauren, having never been onboard Carribean or done that itinerary, but those pina colada soups, the Gravevine tastings and the ice carvings are all familiar. Just can't fault Princess with their hospitality and great food choices, thanks for sharing. And thanks for hosting the #WeekendWanderlust.

I love sailing with Princess! I've done 6 Princess cruises now and have always had an amazing time!

Looks like a great time! It's been quite a while since we've been on a cruise. Your article puts me in the mood to book one.

Can't wait to go cruising again! The sit down dinners are so good and fun. With all the options in the ships, there not even enough time to take advantage of all the offering at a day at sea.

I loved all of the sit down dinners! One of my favorite parts of cruising. All of the delicious food. It's also a good feeling to eat a wonderful meal and not have to pay for it...because it's included! :)