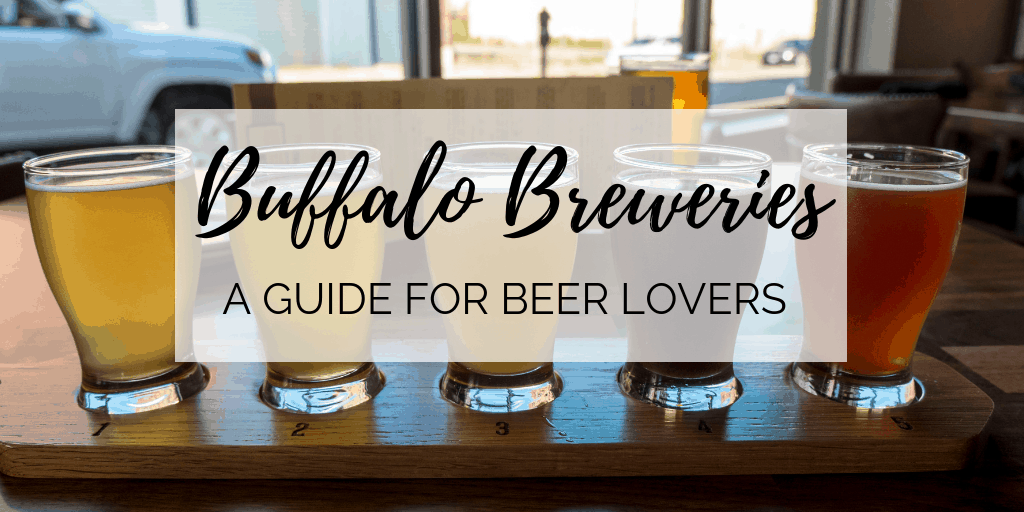 When I first visited Buffalo, and I mean visited for real and not simply as a cross border shopper, I discovered Buffalo’s beer scene. There are so many Buffalo breweries where you can savor a cold pint or a tasting flight if you’re feeling adventurous. When Justin and I first hopped across the border to Buffalo, we checked out two unique craft breweries. Then, we had the opportunity to return for a second year in a row and decided to check two more breweries off our list. There are tons of breweries and it will take us a few more trips to taste all of the beer in Buffalo. However, this is a fantastic starting point for discovering Buffalo breweries and the brew scene.

Just as there’s a resurgence in Buffalo as a whole, Resurgence Brewing Company has brought life to its neighborhood and the local microbrewery scene. If you pay a visit to the brewery, taproom, and beer garden, you’ll notice the fun and energetic vibes. Chat around the fire pit with your friends or if you’re feeling competitive, challenge them to a game. Request a brewery tour if you’d like a little more information. Justin and I sampled beer at one of the picnic tables in the taproom where several groups were laughing and having a great time. 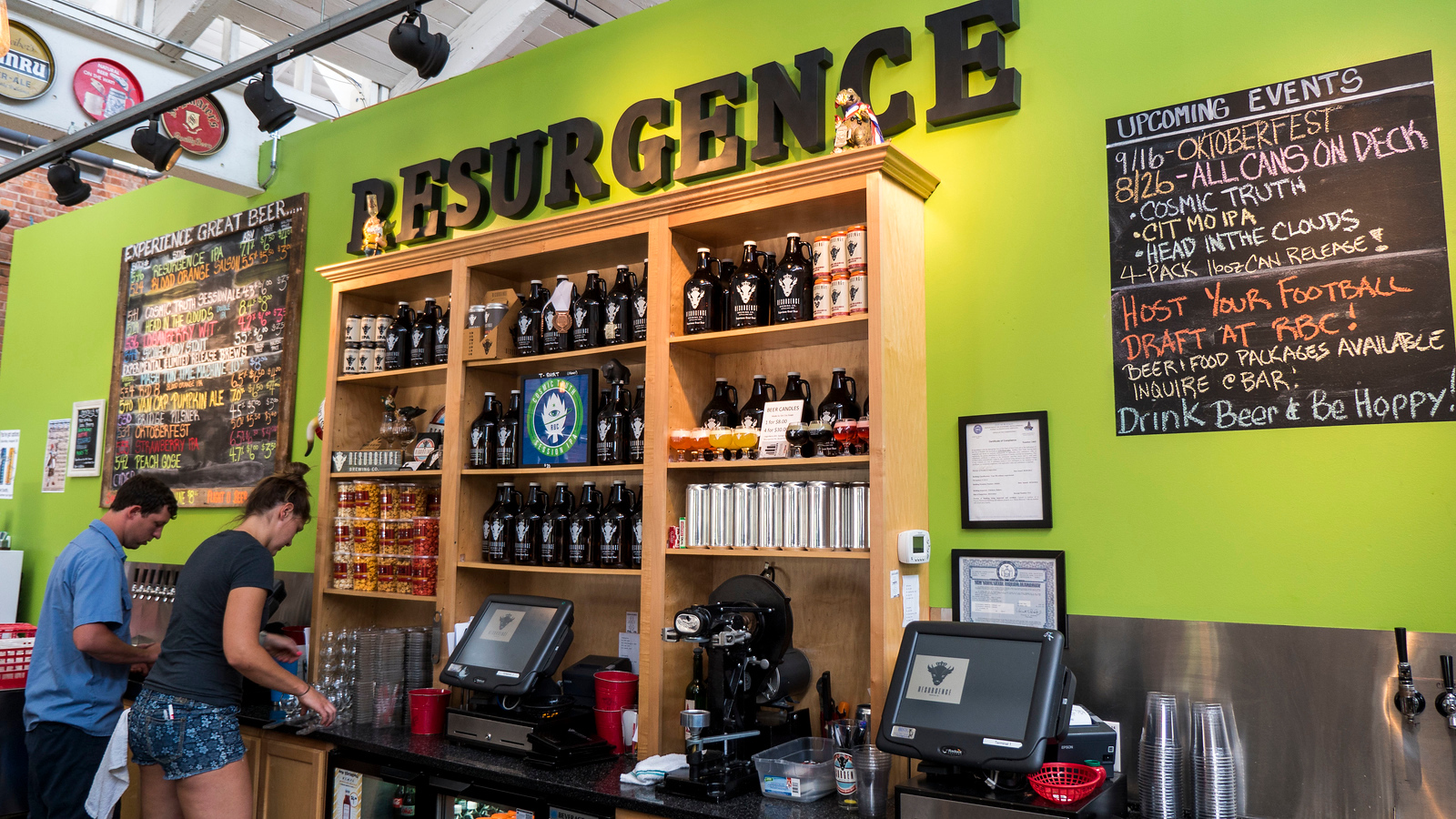 Resurgence Brewing Company (1250 Niagara St, Buffalo, NY) is one of the most innovative breweries I’ve visited. They are always experimenting with new seasonal flavors, many of which you likely never expected would pair well with beer. For instance, their Sponge Candy Stout uses clippings of Watson’s sponge candy with hints of caramel, dark malt, and toffee. The Loganberry Wit uses loganberry (for those not in the know, it’s a cross between a raspberry and a blackberry, sold as a beverage at the long closed Crystal Beach amusement park in southern Ontario) brewed with mild banana and light fruit esters, and it’s pink! I tried these two beers, as well as their Blood Orange Saison and the Bridge Pilsner. They have a rotation of seasonal beers so you can try new beer every time you visit. 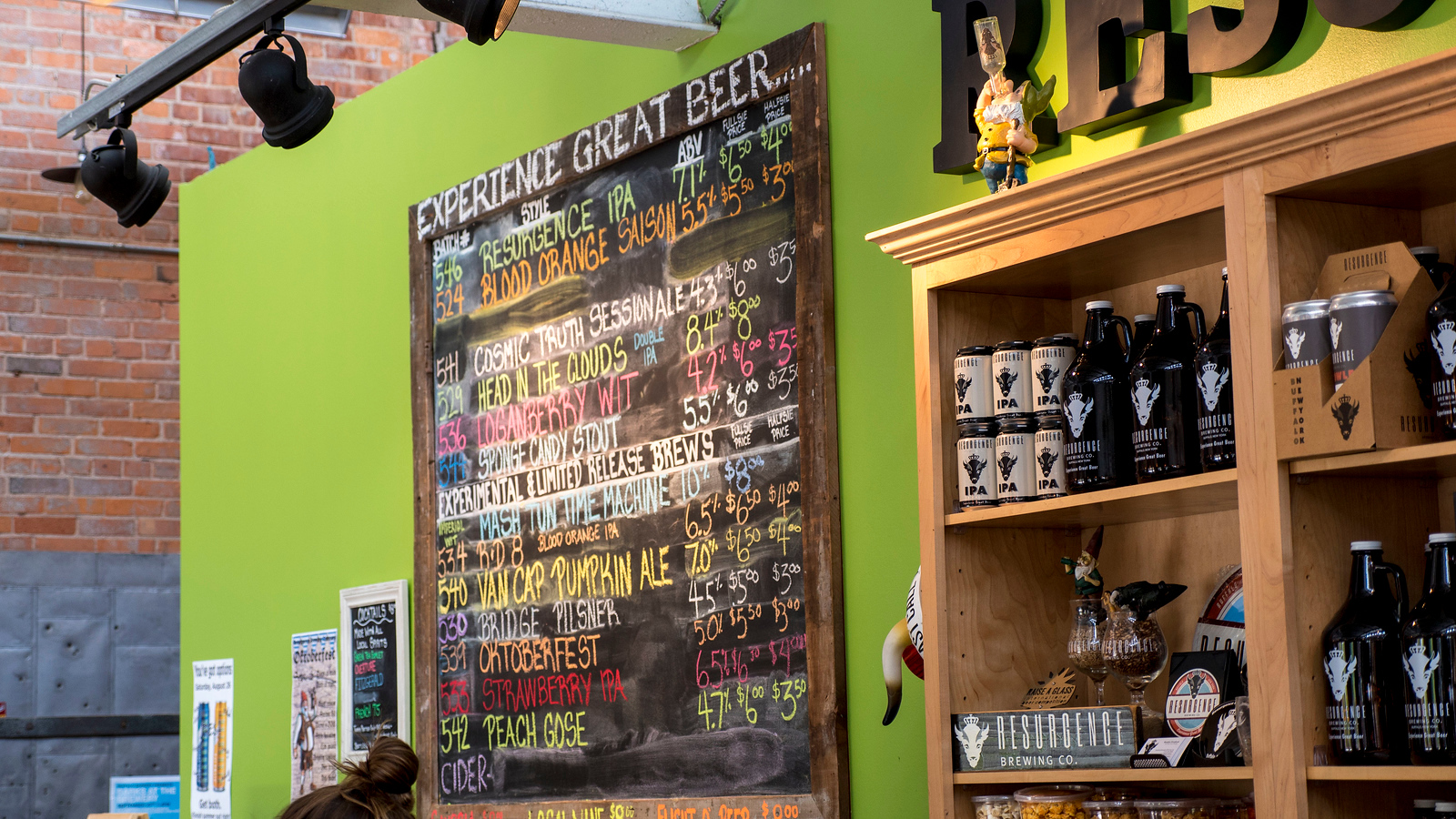 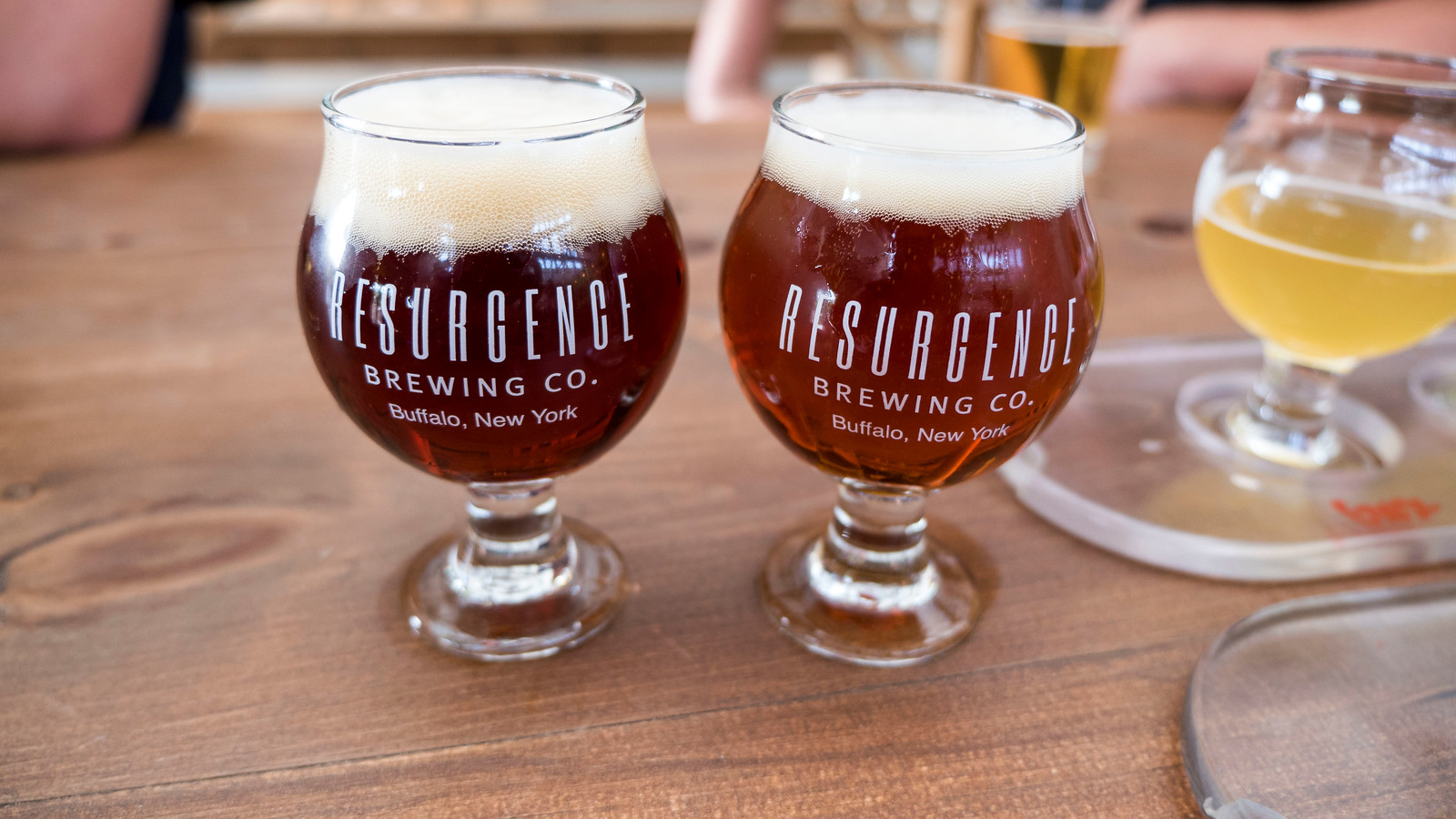 Big Ditch Brewing Company (55 East Huron St., Buffalo, NY) is one of my favorite Buffalo breweries, hands down. First, there’s a gorgeous mural splashed across the side of their building, which instantly won me over before even trying the beer. The name “Big Ditch” refers to the Erie Canal, back when the locals were skeptical that it would ever be constructed. However, this “Big Ditch” brought business and prosperity to Buffalo for decades. And just as the local residents have the ambition to reinvent Buffalo once again, this brewery celebrates their pride and determination throughout the past and the future. 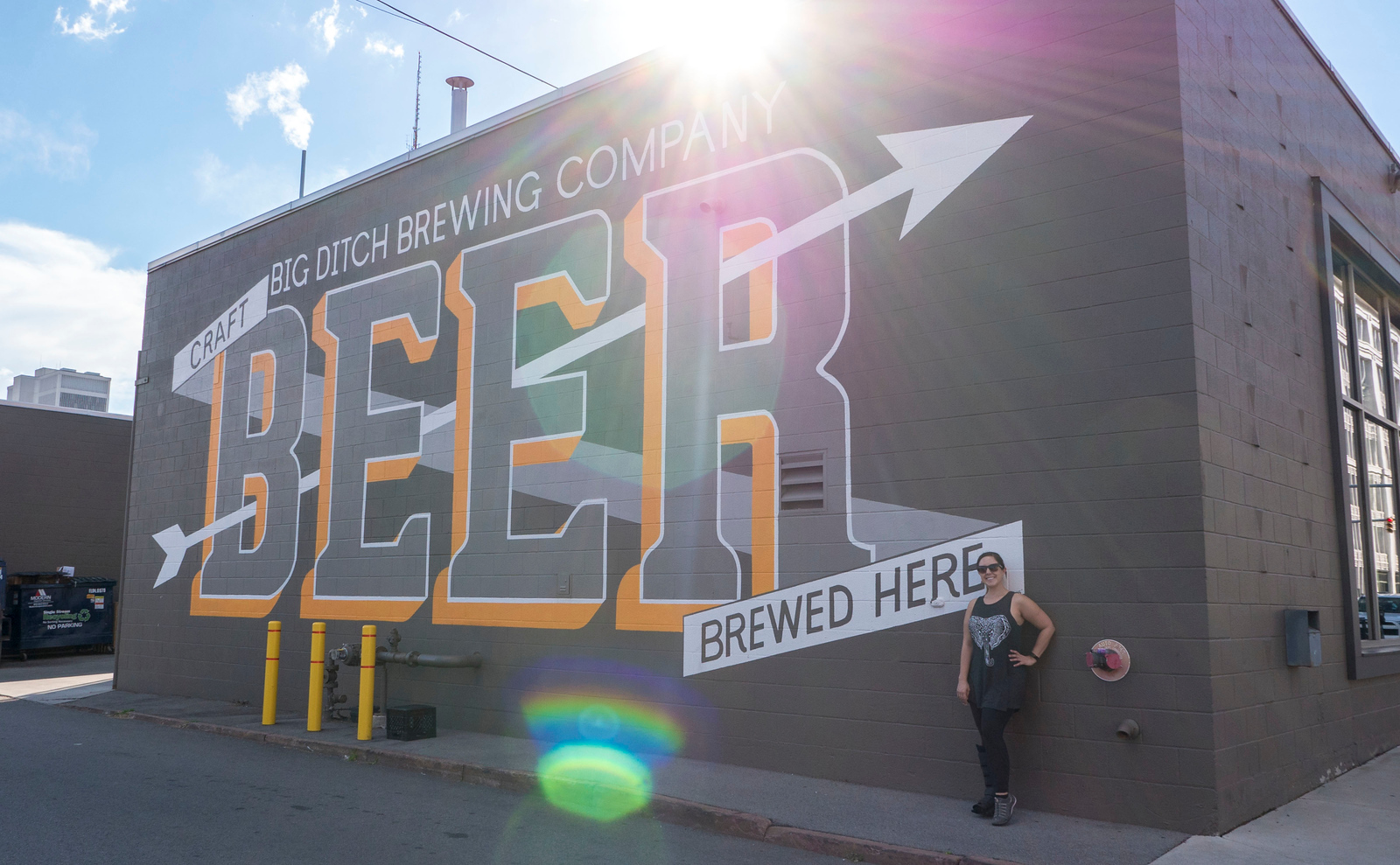 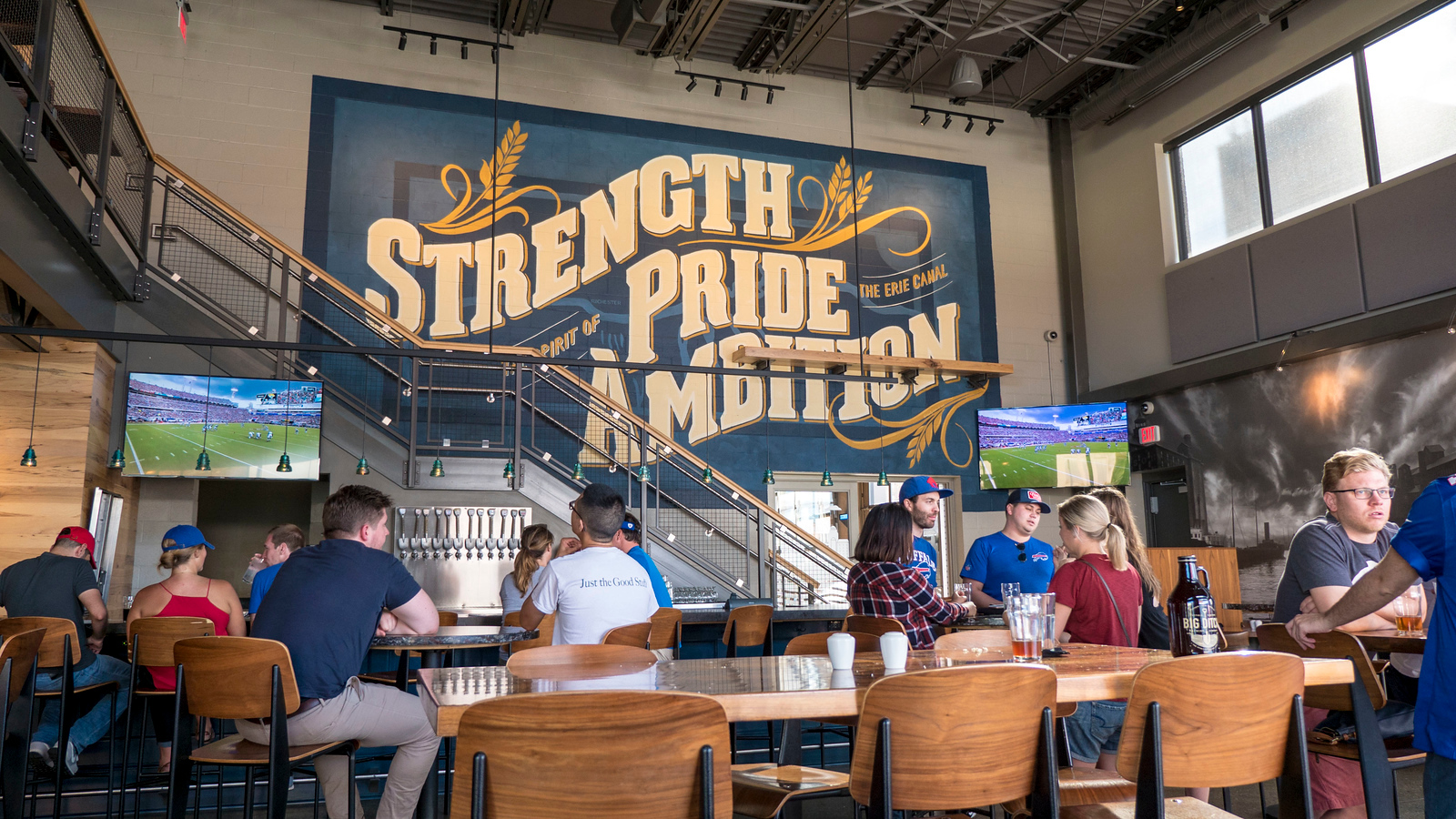 I sampled a flight of beers here, and they serve you five beers rather than the typical four (a nice bonus!). As usual, I tried quite a few seasonal ales as well as some of the classic favorites: the Berliner Weisse, Blonde Peach, Cinnamon Apple, FC (Fantastically Crushable), and Fresh Baked. My vote for the best beer goes to the Blonde Peach by far, where they use loads of real peaches in the brewing process. The Cinnamon Apple amber ale was perfect for the start of the fall season! 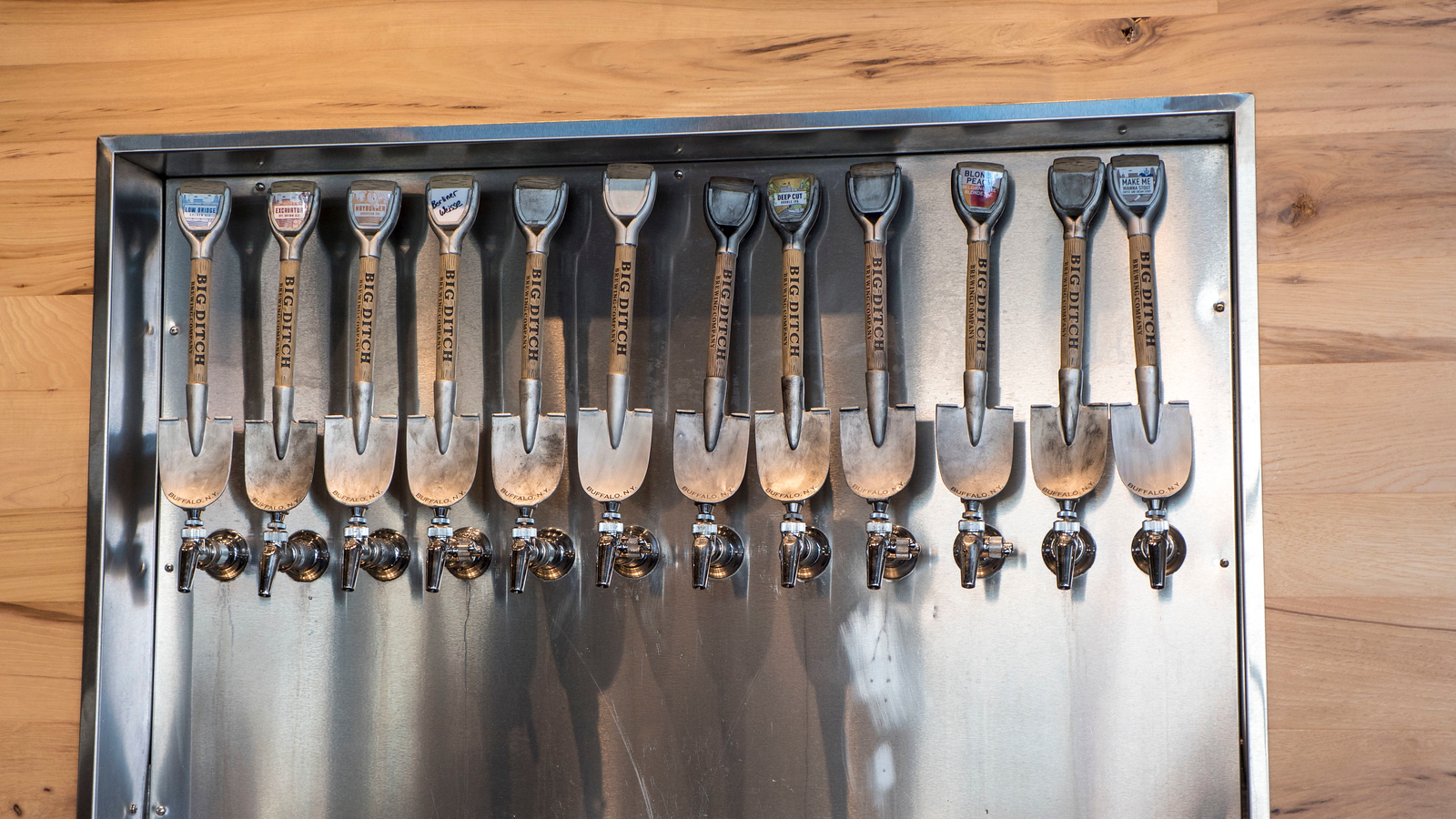 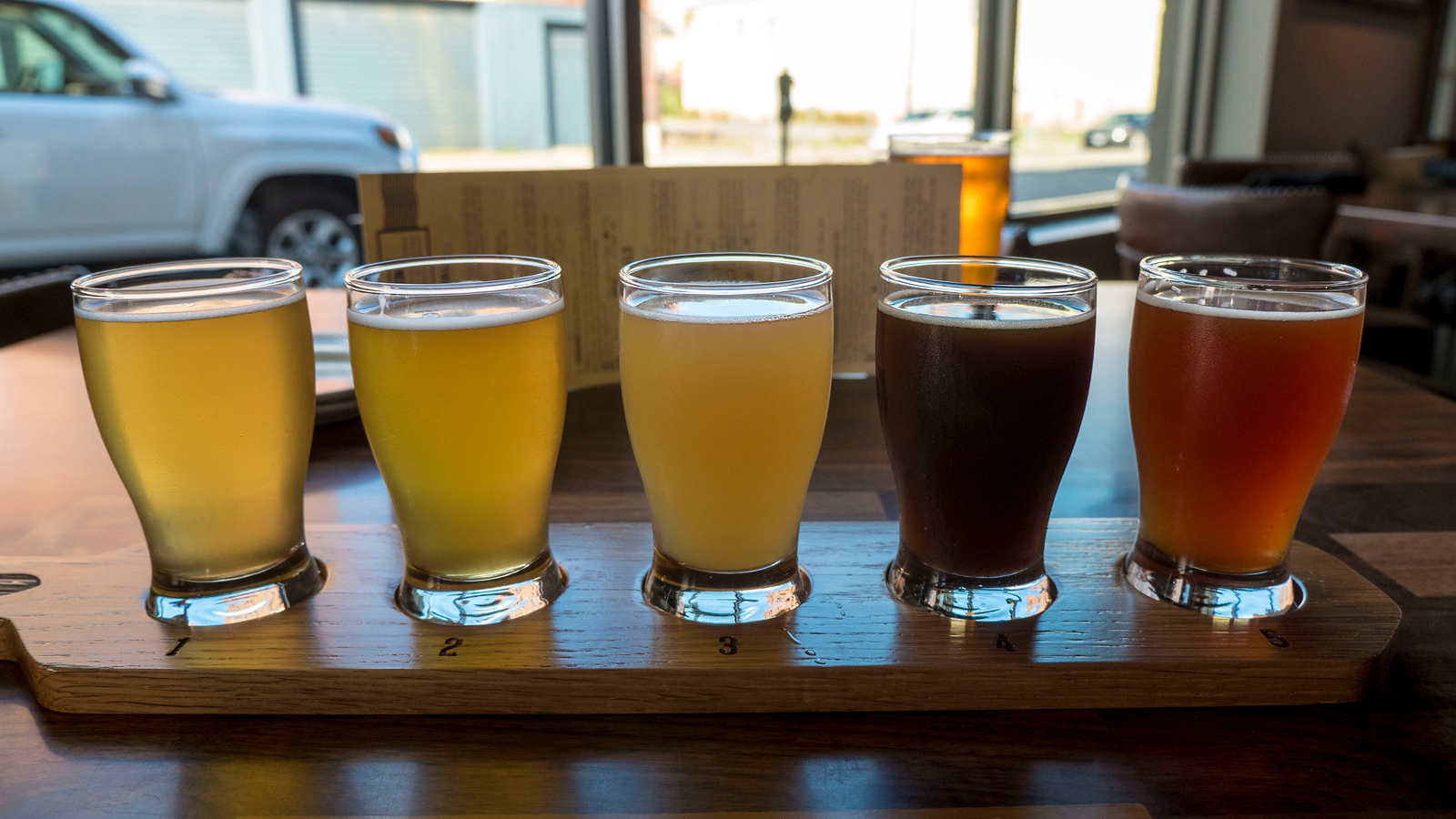 RiverWorks Brewing (359 Ganson Street, Buffalo NY) is the first brewery in the world to operate inside a former grain silo. As a part of the waterfront revitalization, these abandoned grain silos are given a new life as a brewery. Step right up to the Silo Bar at the base of the silo and order a pint! Although they’re branded on the outside by Labatt, RiverWorks brews their own beer. It’s certainly one of the most innovative and interesting breweries I’ve ever seen. Justin and I both ordered a pint of the Wheeler Wheat (a traditional German Hefeweizen brewed with wheat and barley), and we loved it. Take a seat on the patio around the grain silo, or take your beer indoors to watch TV and play arcade games. If you’re feeling adventurous, you can go rock climbing after you finish your drink (or maybe it’s better to go rock climbing before you drink?) on the rock climbing walls on the side of another set of abandoned silos! 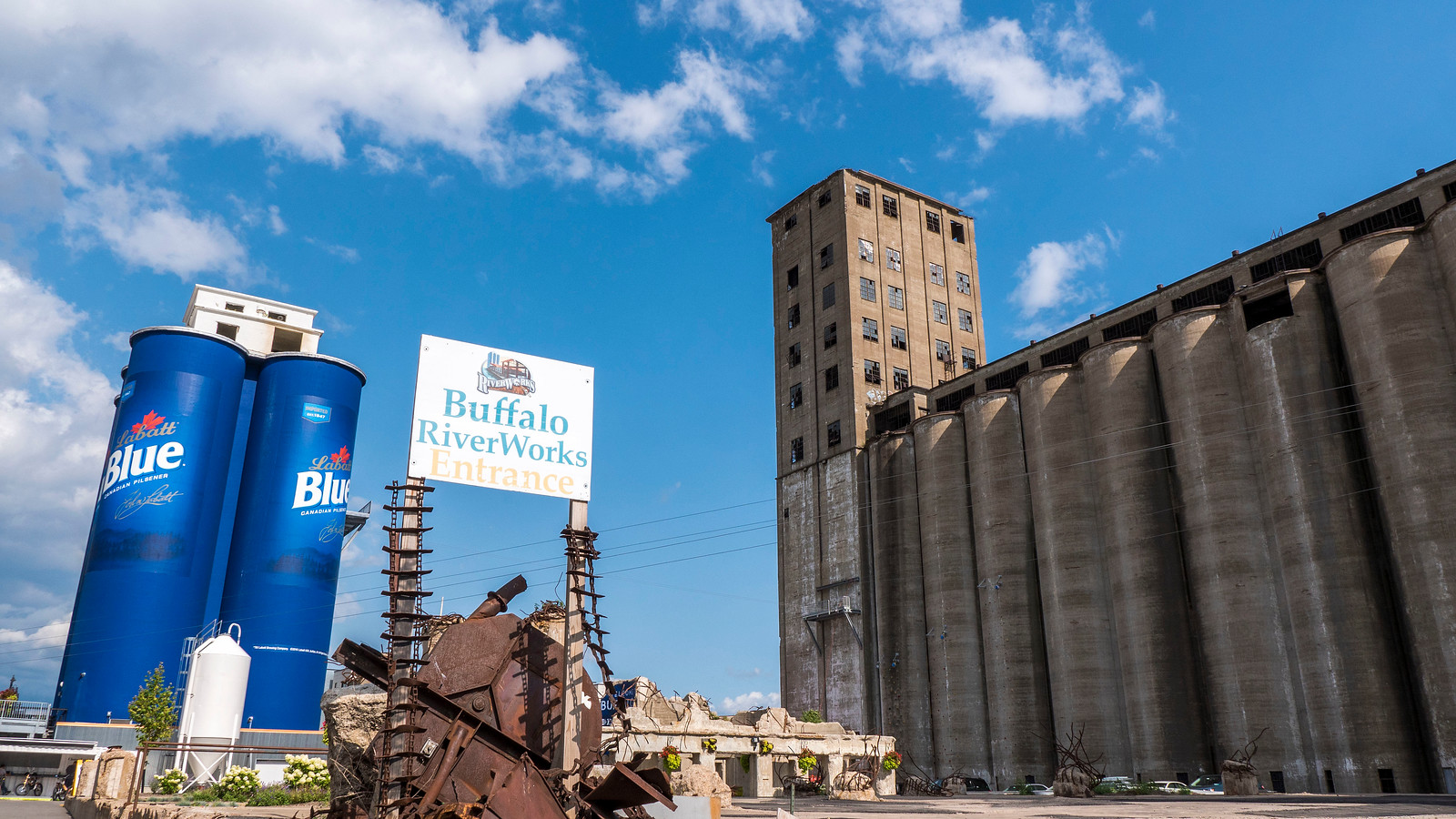 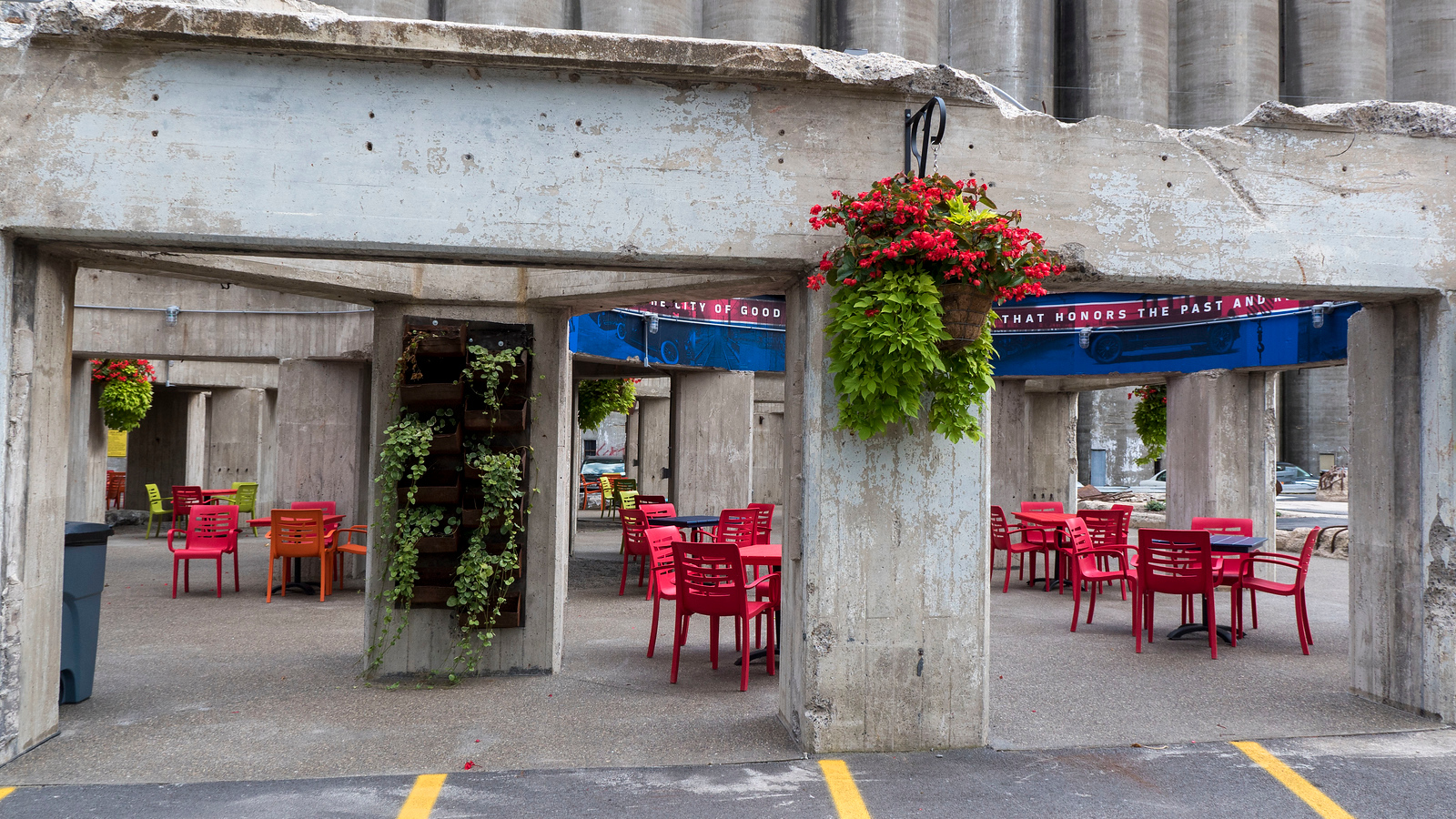 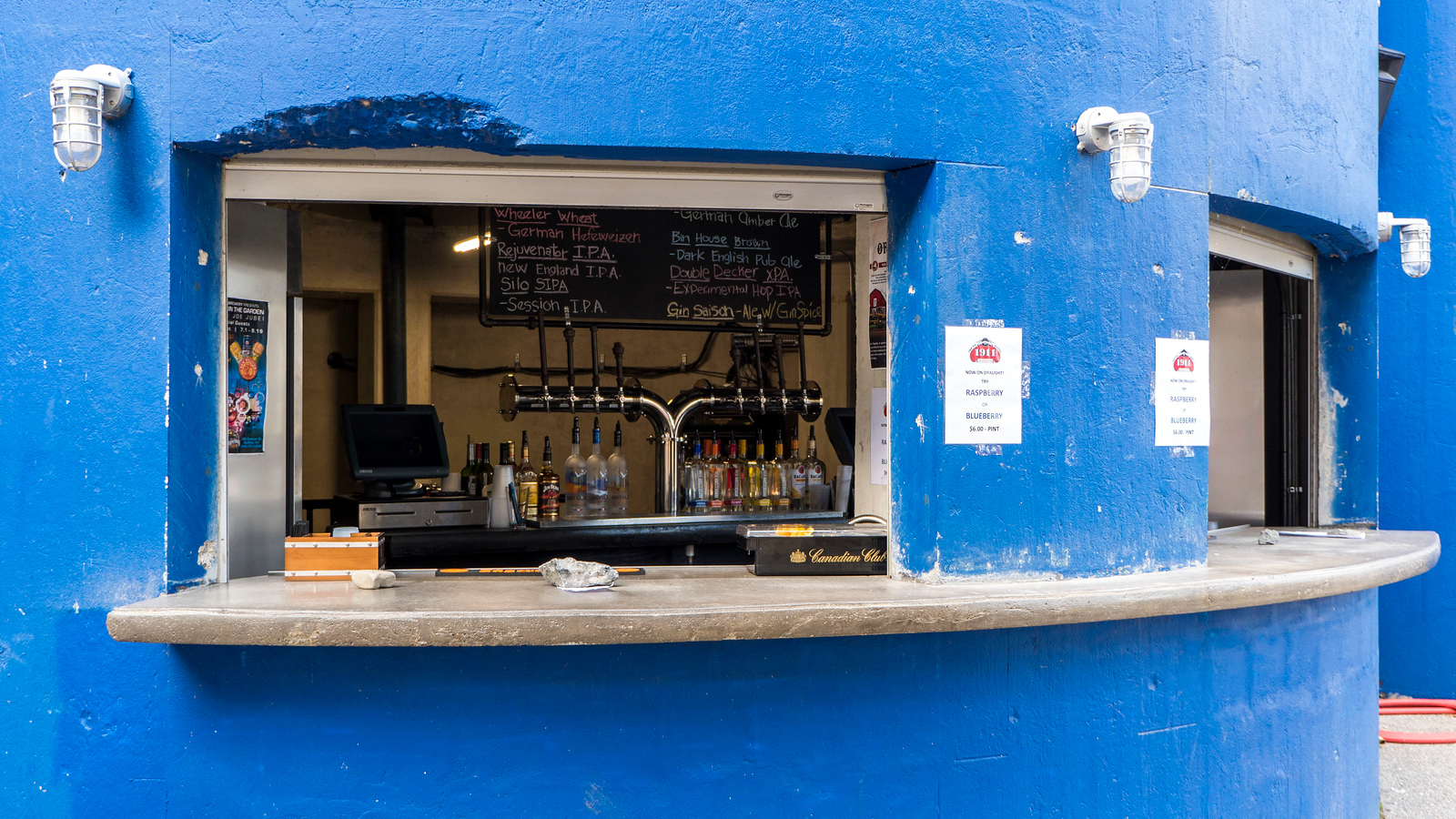 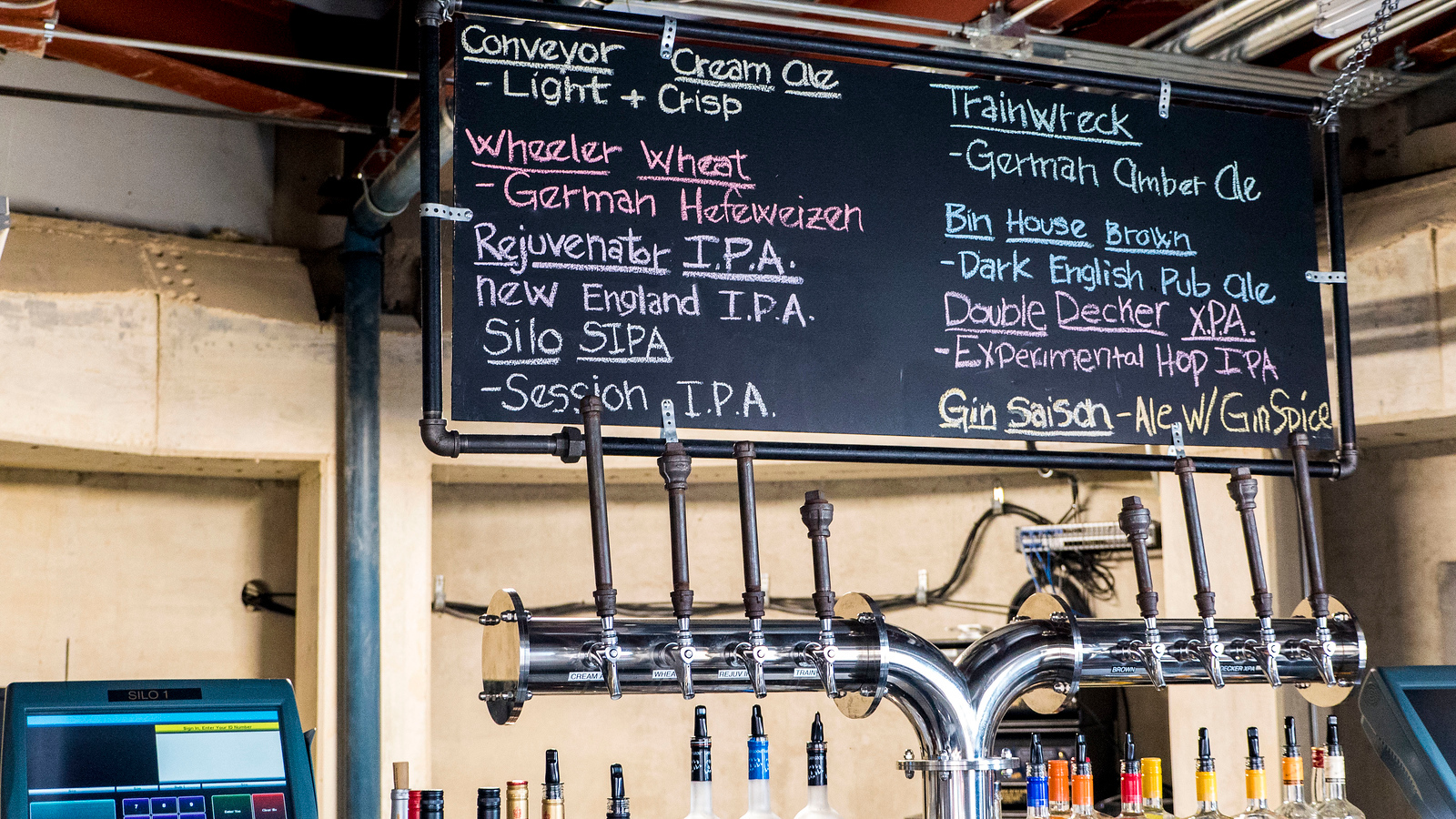 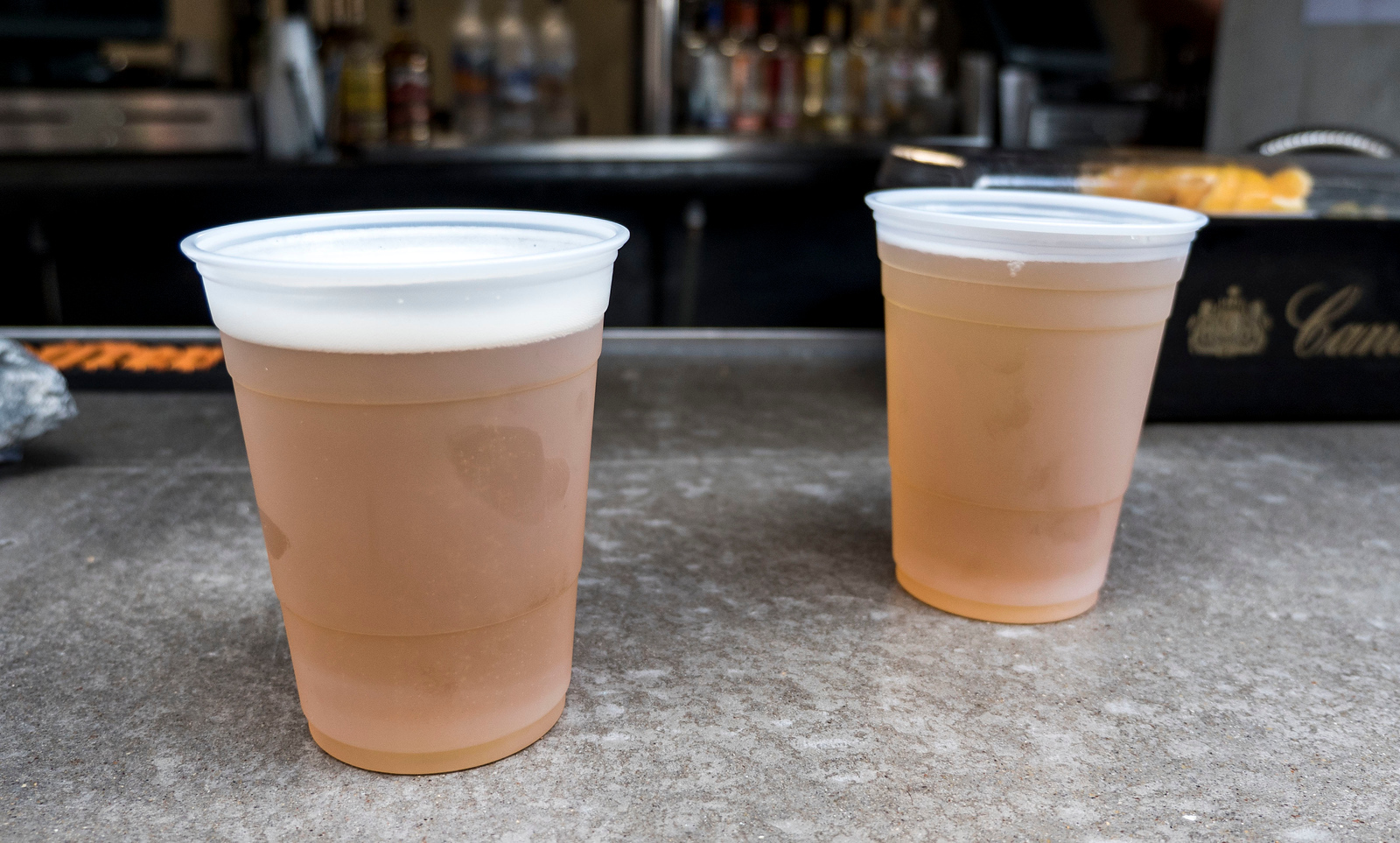 Thin Man Brewing (492 Elmwood Ave., Buffalo, NY) is the only brewery in Elmwood Village. The brewery has a sports bar vibe with a lengthy bar, several TV screens, and a games room upstairs. The bar wasn’t open upstairs when we visited, although we wish we had sat out on their rooftop patio (we only noticed it as we were leaving). Next time! 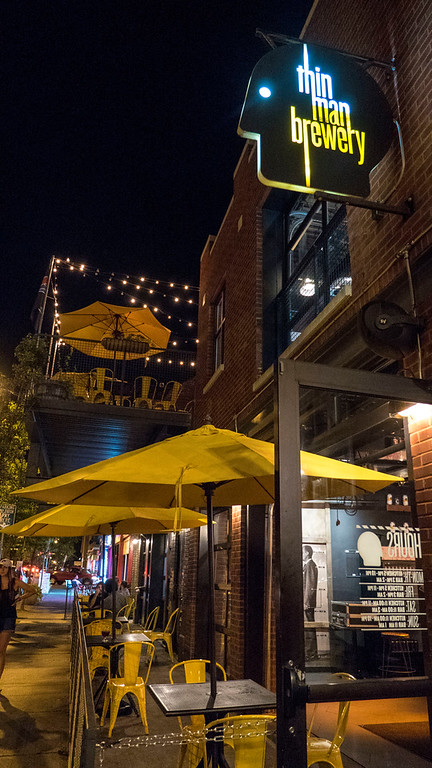 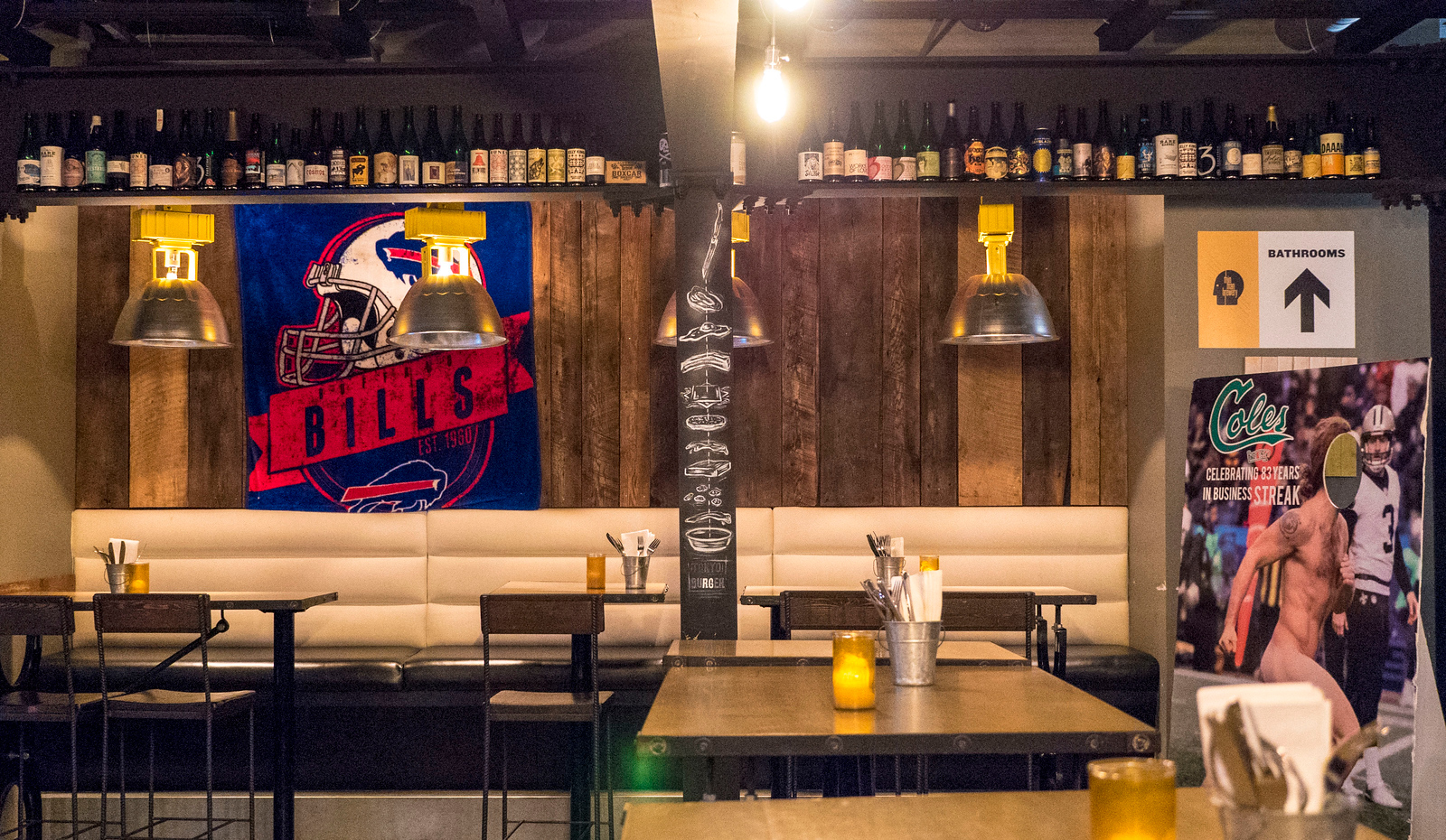 Out of all the Buffalo breweries we visited, this one had the most collaborations with other microbreweries. You can find a huge selection of their own beers, as well as other beers that are made with other breweries. Justin opted for their own Pills Mafia (German pilsner) and I ordered the Sunseeker Gose (a collaboration between Thin Man Brewing and Bolton Landing Brewery). My beer was a cherry lime sour, which was pretty strong but summery! Thin Man Brewery had several vegan options on their food menu. If you’re interested in learning more, check out our vegan guide to Buffalo. 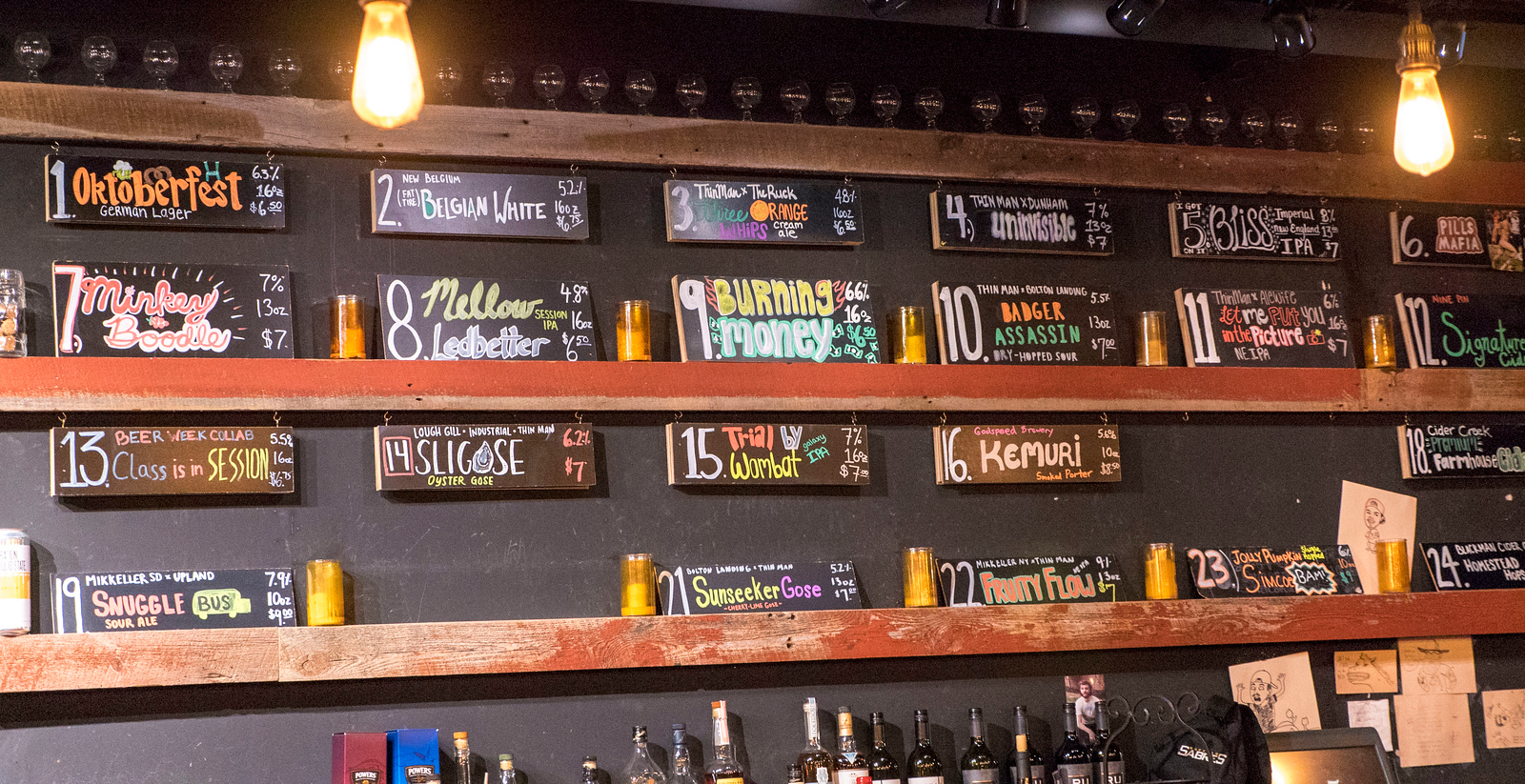 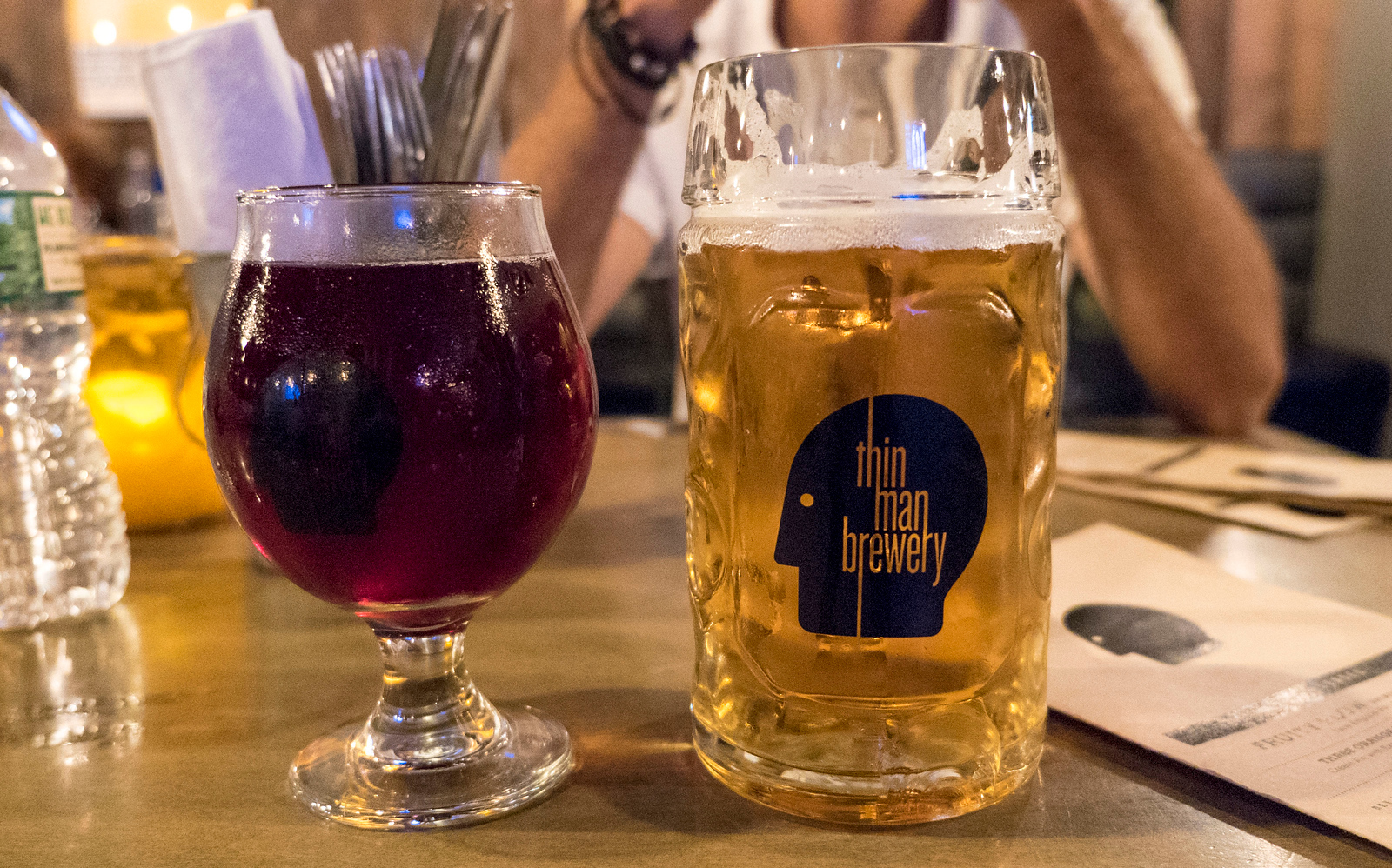 There are so many more Buffalo breweries in addition to the four we’ve visited. These ones are on our list for next time, and we’ll be updating this blog post as we check them out with our personal experiences and recommendations.

Have you visited any of these breweries? Which beer would you recommend that we try if we’re into less hoppy/bitter beer? I usually shy away from IPAs myself and go for the fruitier or lighter beers. 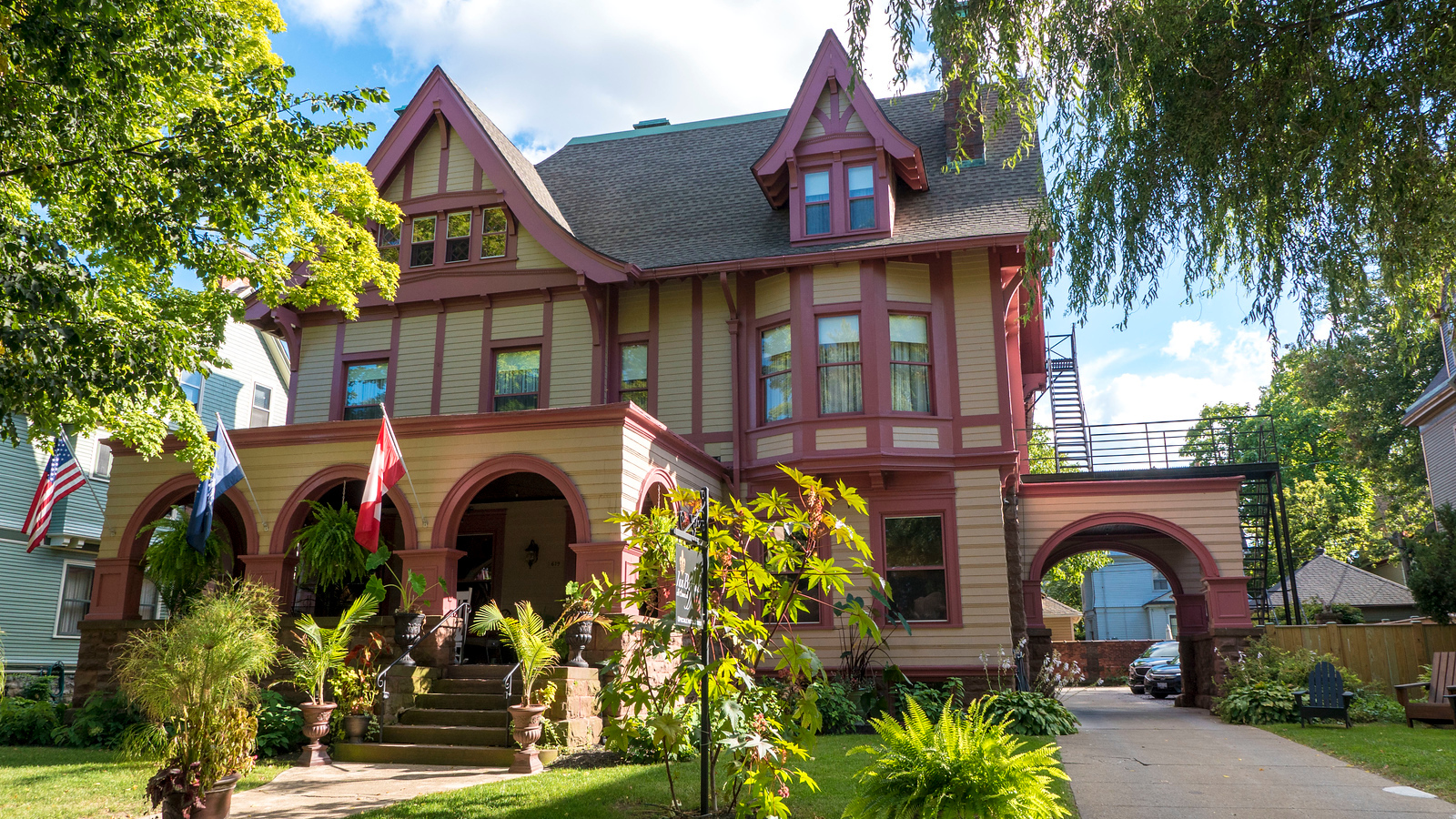 After sampling a number of refreshing local brews, you might want to spend the night in Buffalo. We highly recommend staying at InnBuffalo in Elmwood Village. Not only is it a fabulous historic hotel, but it’s in a centralized location. Check out our full review of InnBuffalo, and find out why it’s the #1 rated hotel on TripAdvisor.

Have you visited any of these Buffalo breweries? What kind of beer is your favorite?

I'm not much of a beer drinker (I usually leave that to my husband), but even I like RBC's Loganberry Wit! Plus I love the games & beer garden.

I lived in Buffalo for 12 years and have hardly heard of any of these. Can’t believe Pearl Street was so low on your list. It’s an extremely popular place to go for people in Buffalo. Also- no mention of Ellicottville?

Sunny, the honorable mentions aren't in any sort of rank - they're simply ones I haven't visited yet! They're on my list to visit next. Ellicottville Brewing I believe is in Ellicottville itself and these are only breweries that are found right in Buffalo. I could easily expand my list for all of western New York or New York state, but that list would be MASSIVE. Maybe someday! :)

I had no idea Buffalo had a brewery scene! How does it rank worldwide in your opinion??

Kay, it ranks right up there with the best of them! I love the originality in the beer, and it's super delicious, too! You can easily plan a trip here just based on trying all of the breweries!