After we returned to the Caribbean Princess from Princess Cays, we had an unfortunate mishap to figure out. Robyn had a Sony waterproof camera that she brought along with her GoPro camera. She decided to take the Sony camera underwater while snorkeling at Princess Cays when she heard the camera make a sound. It immediately shut off. It appeared that this waterproof camera was suddenly not so waterproof after all! In a last ditch effort to fix the camera, we were in search for…a bowl of uncooked rice. Yes, I had read online that if you place your wet electronic device inside a bowl of uncooked rice that there was a chance that it could be saved. So, imagine us walking up to the buffet counter and kindly asking one of the servers for a bowl of uncooked rice. Yes, we got a few funny looks until one employee also knew about this method. He returned a few minutes later with a large, metal mixing bowl filled with uncooked white rice! Success!

Robyn and I decided to take turns retrieving our second lunches (after the mediocre vegetarian meal we had at the BBQ buffet on Princess Cays) from the Horizon Court buffet, while the other one played babysitter to the camera. She went up to the buffet first. Now, this big metal bowl attracted a lot of attention from the Horizon Court dining area servers. They weren’t very busy at that moment as many people had eaten already at Princess Cays. Before I knew it, I was surrounded by several servers who were all very curious about what was inside this bowl. They all had big smiles on their faces as they looked down to see a camera strap poking out of a bowl of rice. I explained the predicament and I was given several well wishes that the camera could be saved. (In the end, after leaving the camera inside the rice in our cabin for five days, it didn’t end up working. Oh well, it was worth a shot!) 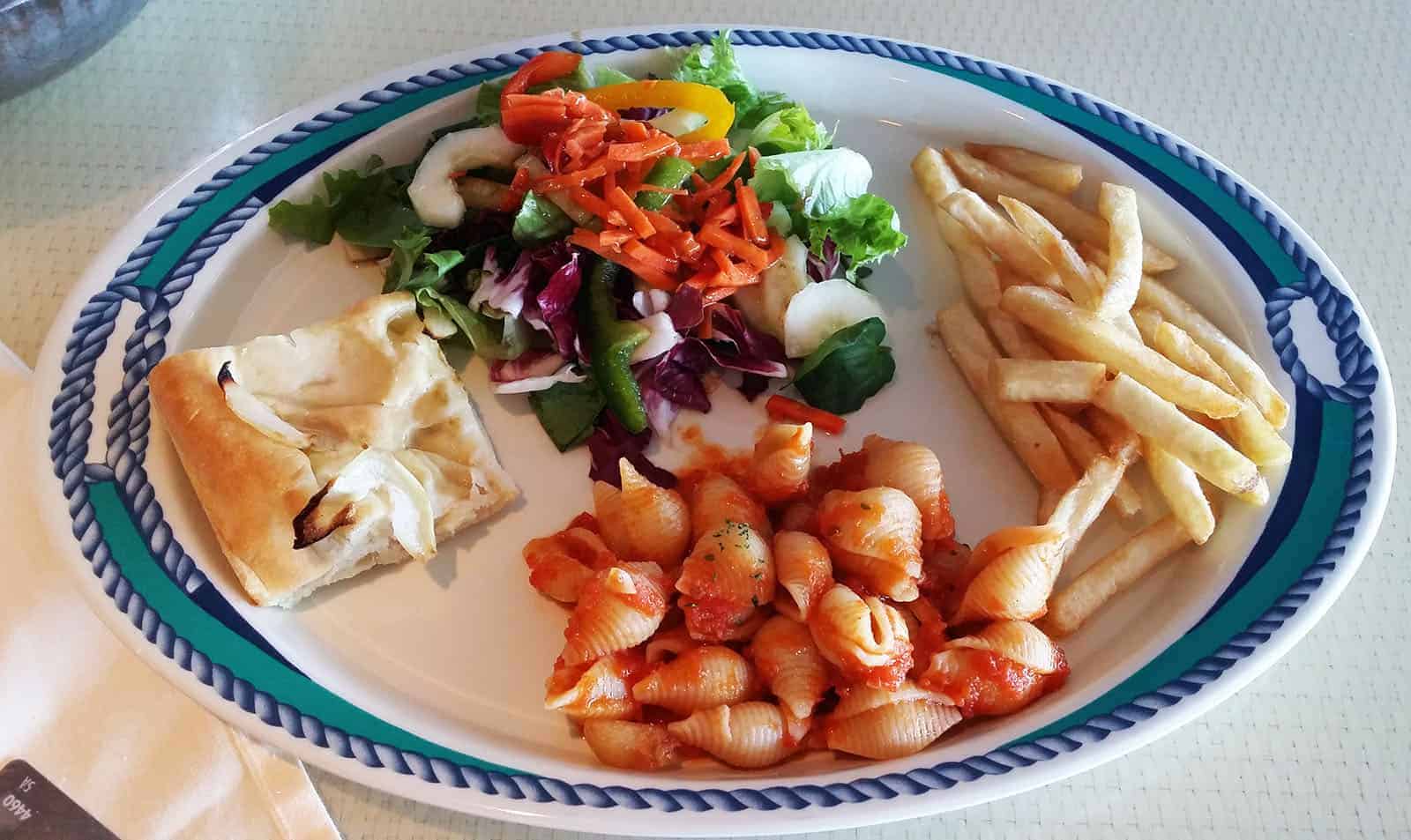 We had a little bit of time to kill before dinner, so we attended an art lecture at the Explorer’s Lounge presented by the art auctioneer. It was just a half hour long and entitled, “Art @ Sea: 30,000 Years of Art History Seminar.” 30,000 years in a half hour was a very, very, very brief overview of periods of art and artists from cave paintings to pop art of the modern day. Though I already knew a little bit about art history, I found it to be really interesting! I would have loved for the lecture to have been even longer – an hour or two would have been great. We decided to attend more art seminars throughout the cruise whenever possible. We took advantage of the Platinum perks this evening, visiting Skywalker’s Night Club for the early evening Elite Lounge. They were featuring a delicious tomato bruschetta along with the drink of the night, the Brezza Marina for $5. I have to admit that I didn’t even know what the Brezza Marina was, but I had read about another cruise blogger enjoying it so I had to give it a try! I gave it a sip…GIN! No! I can’t stand gin. After a couple of sips, it did taste a lot better (isn’t that always the case!?) and I finished it, no problem. 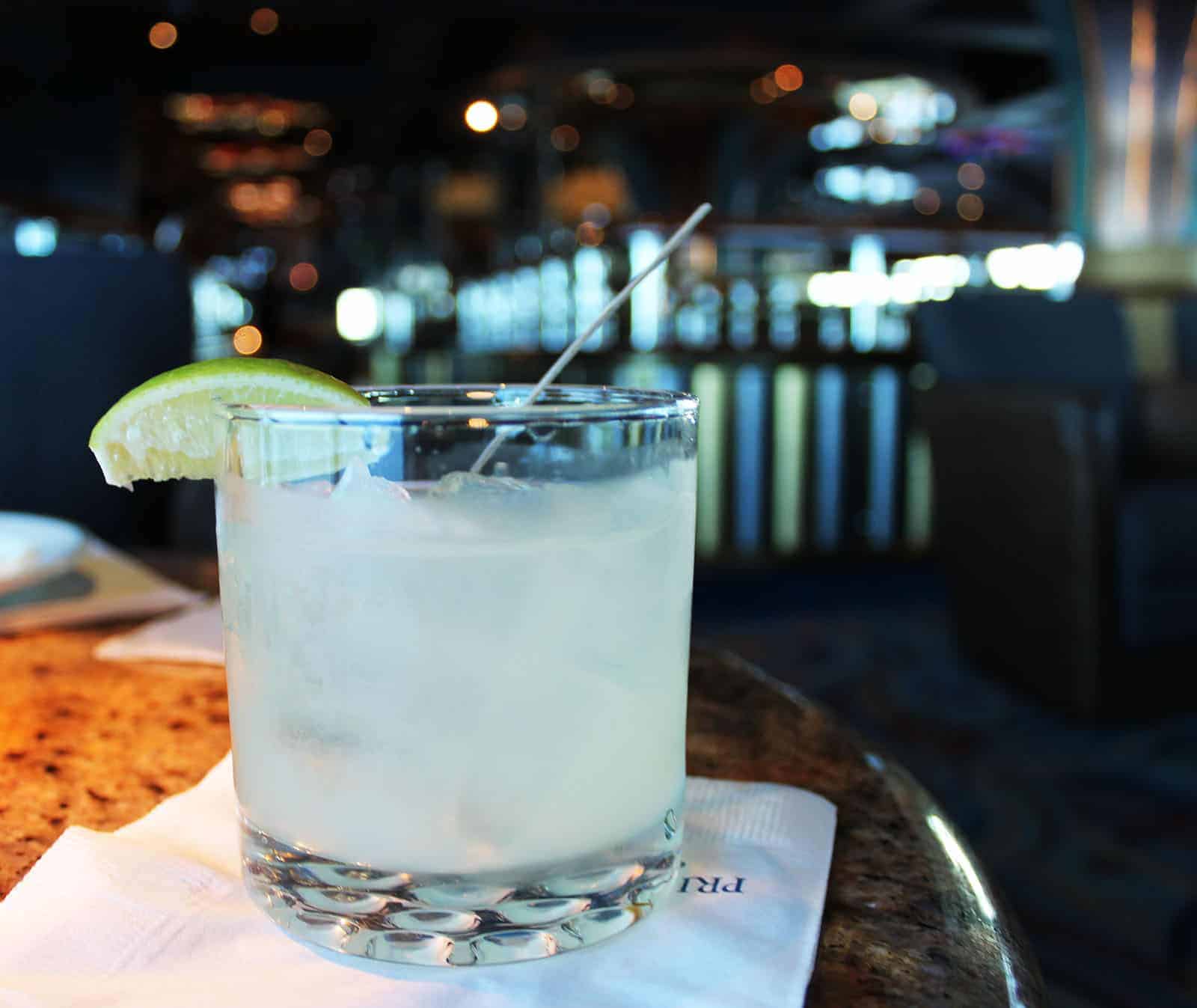 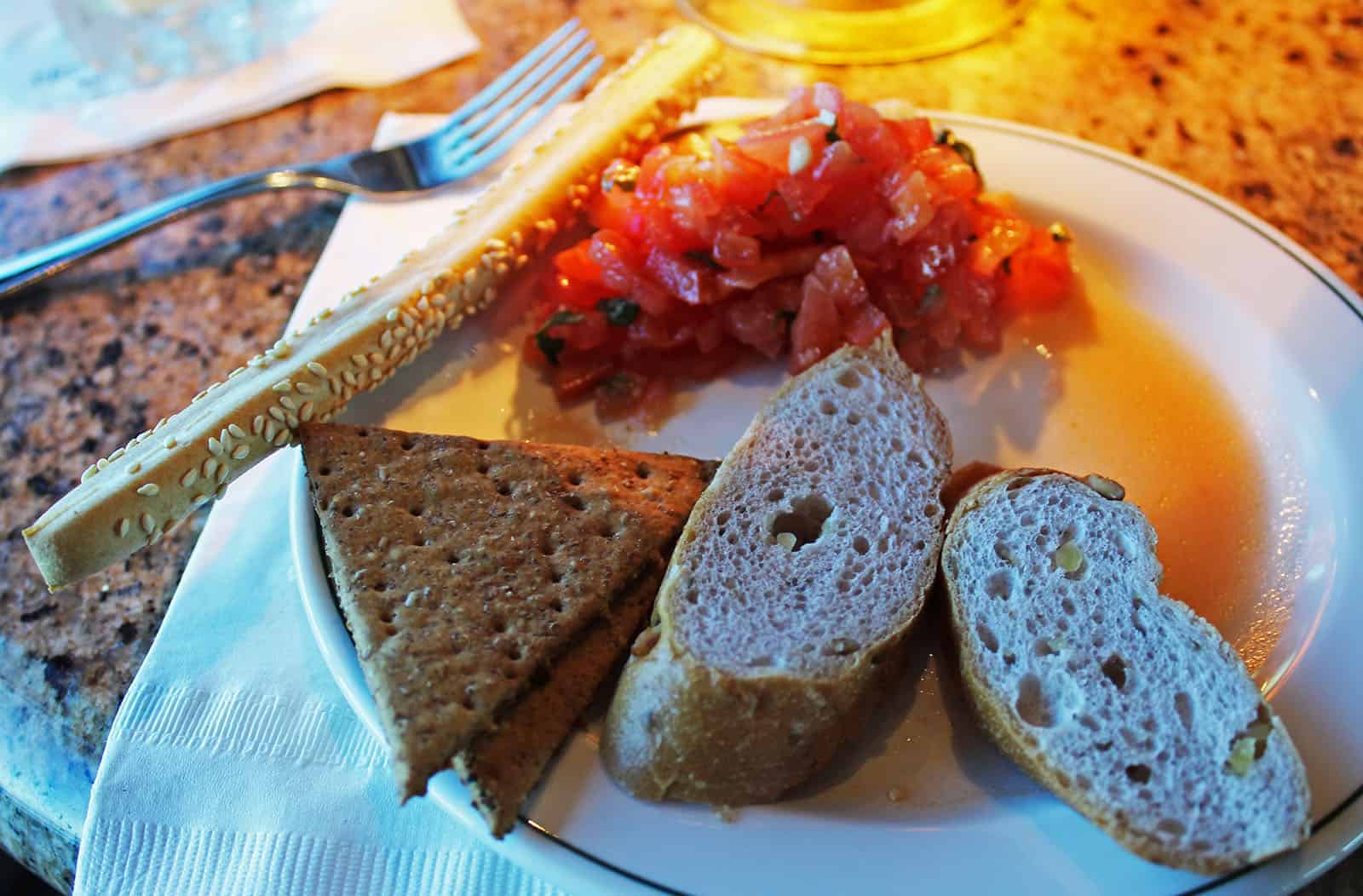 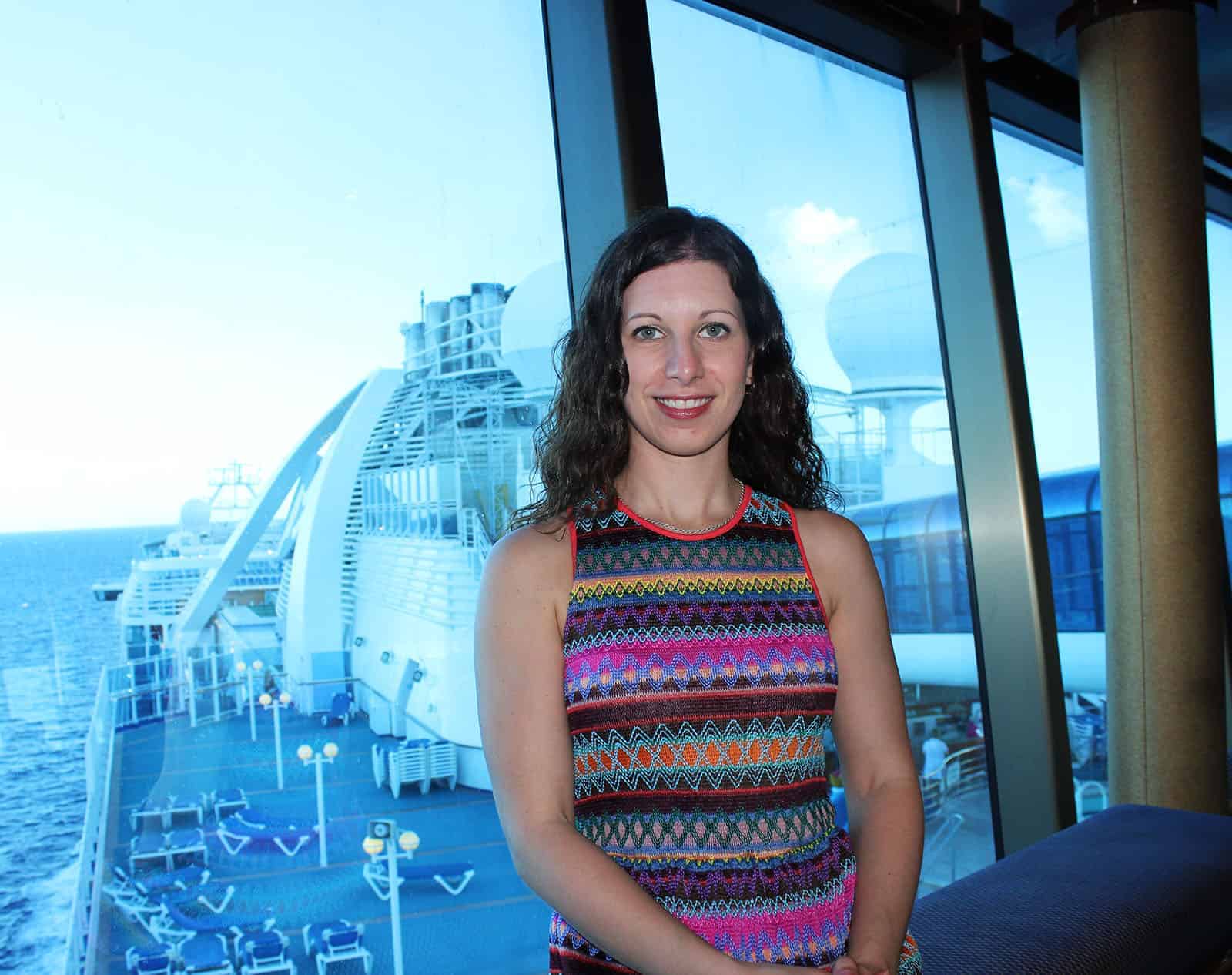 We really enjoyed the ship and ocean views from this spot! We walked over to the Piazza for a short performance by the Canadian entertainment duo, La Paire, who performed some acrobatics. They performed in the middle of the central atrium so they could be viewed from all three floors. I was very impressed by their balancing acts and their sheer strength. La Paire really captured the interest of the crowd and were highly entertaining, performing their stunts to the music. 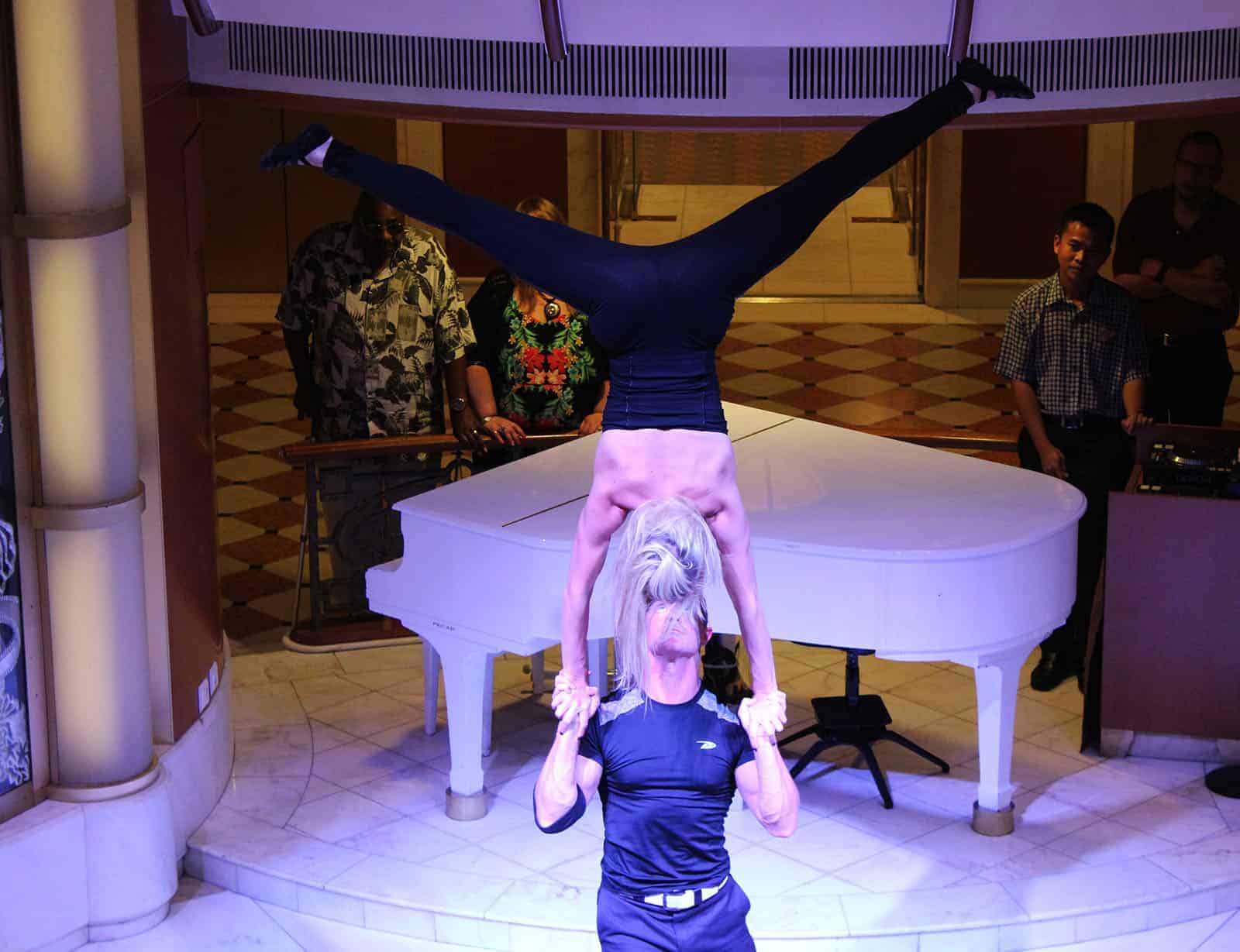 As we clearly still weren’t hungry enough for dinner yet (helloooo two lunches and pre-dinner snack!), we went to the early show in the Princess Theatre. Typically, a major act will have an early show and a late show to work around those who have set dinner times in Traditional Dining. Tonight, we attended the Grand Illusion Show starring Master Magician, Alex Ramon. He had a variety of magic tricks, including disappearing and levitation acts. The best part was when he brought up a member of the audience and got him to participate in the show. It was very entertaining and had us wondering how he performed some of the magic tricks! 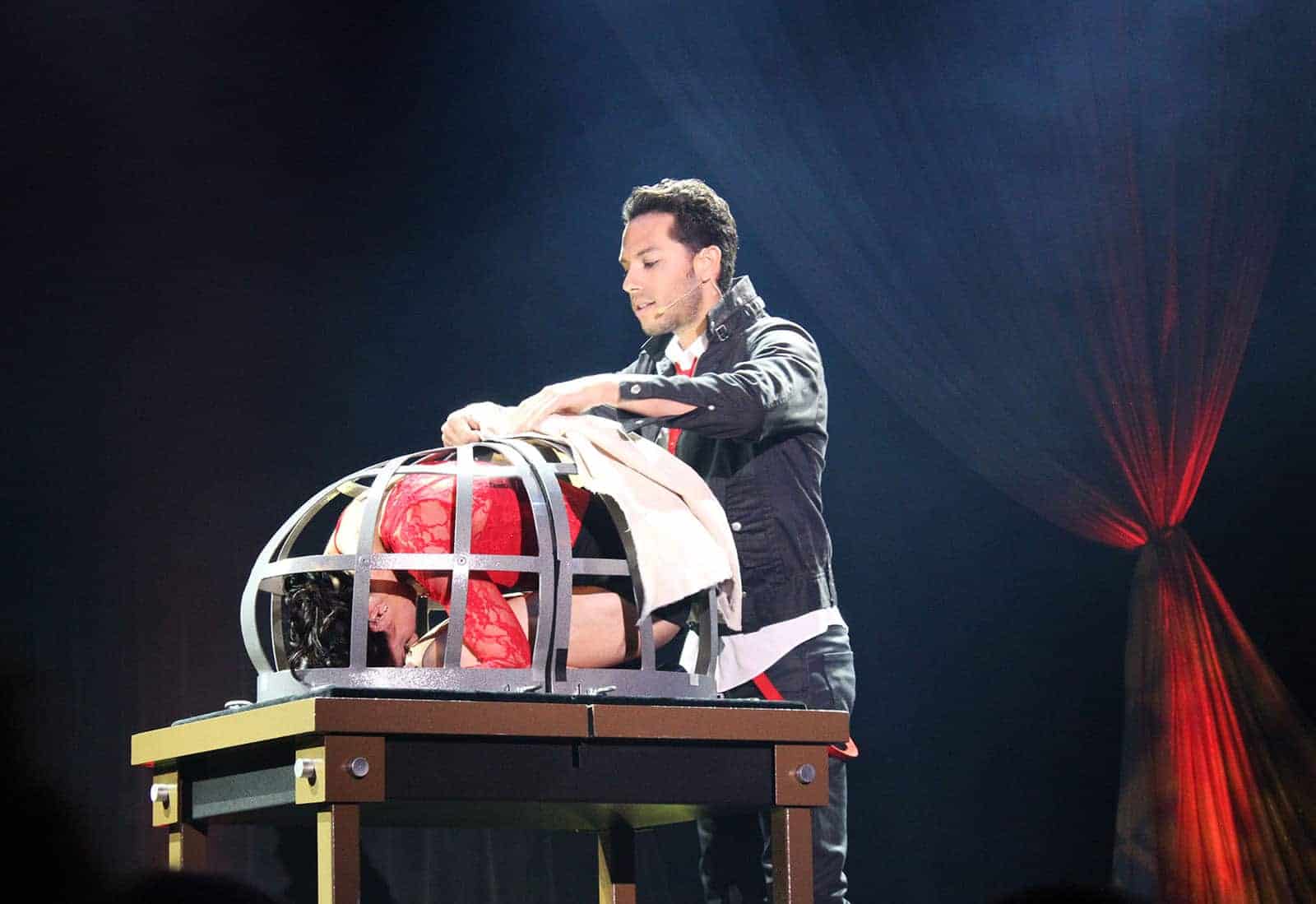 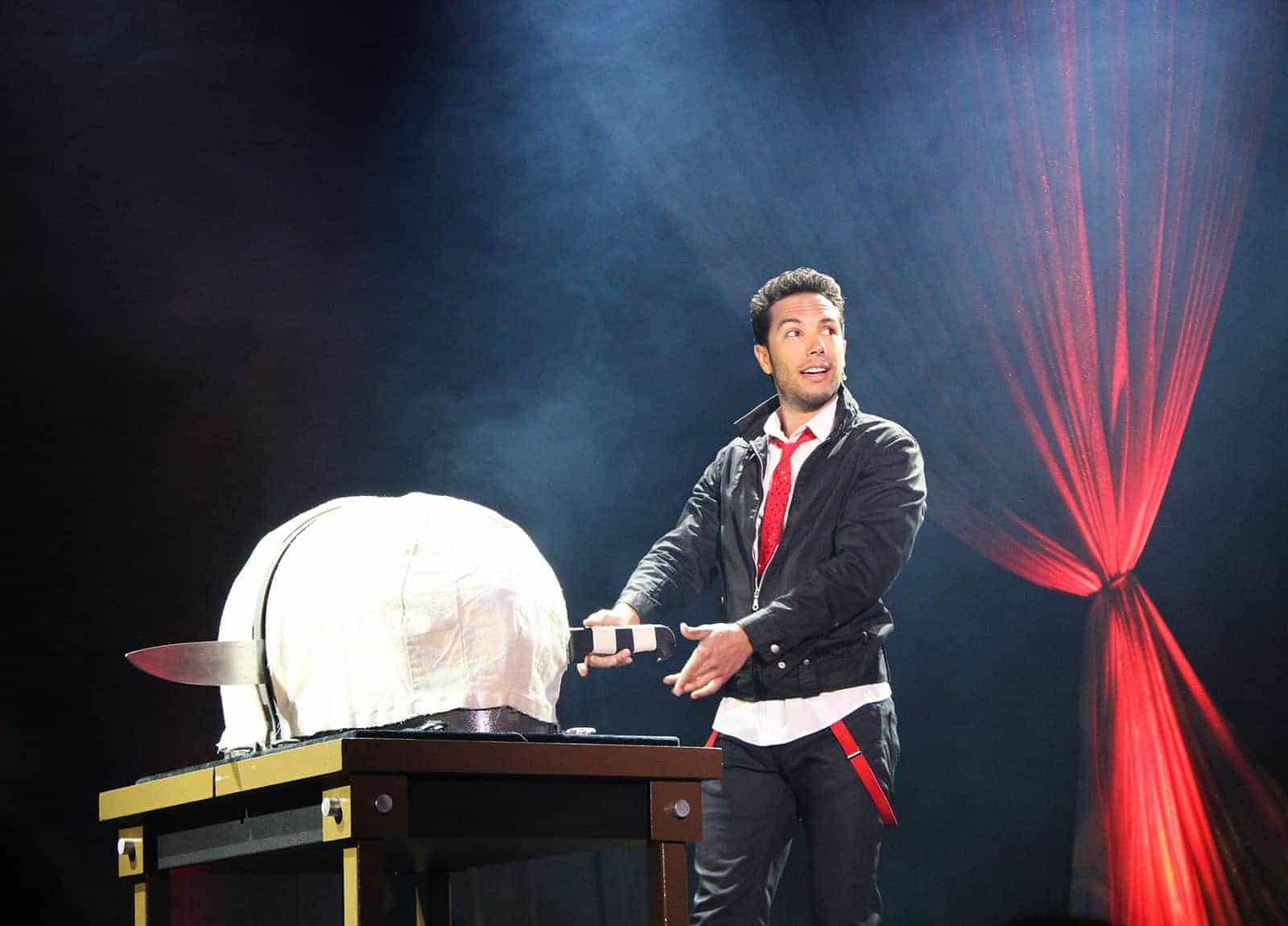 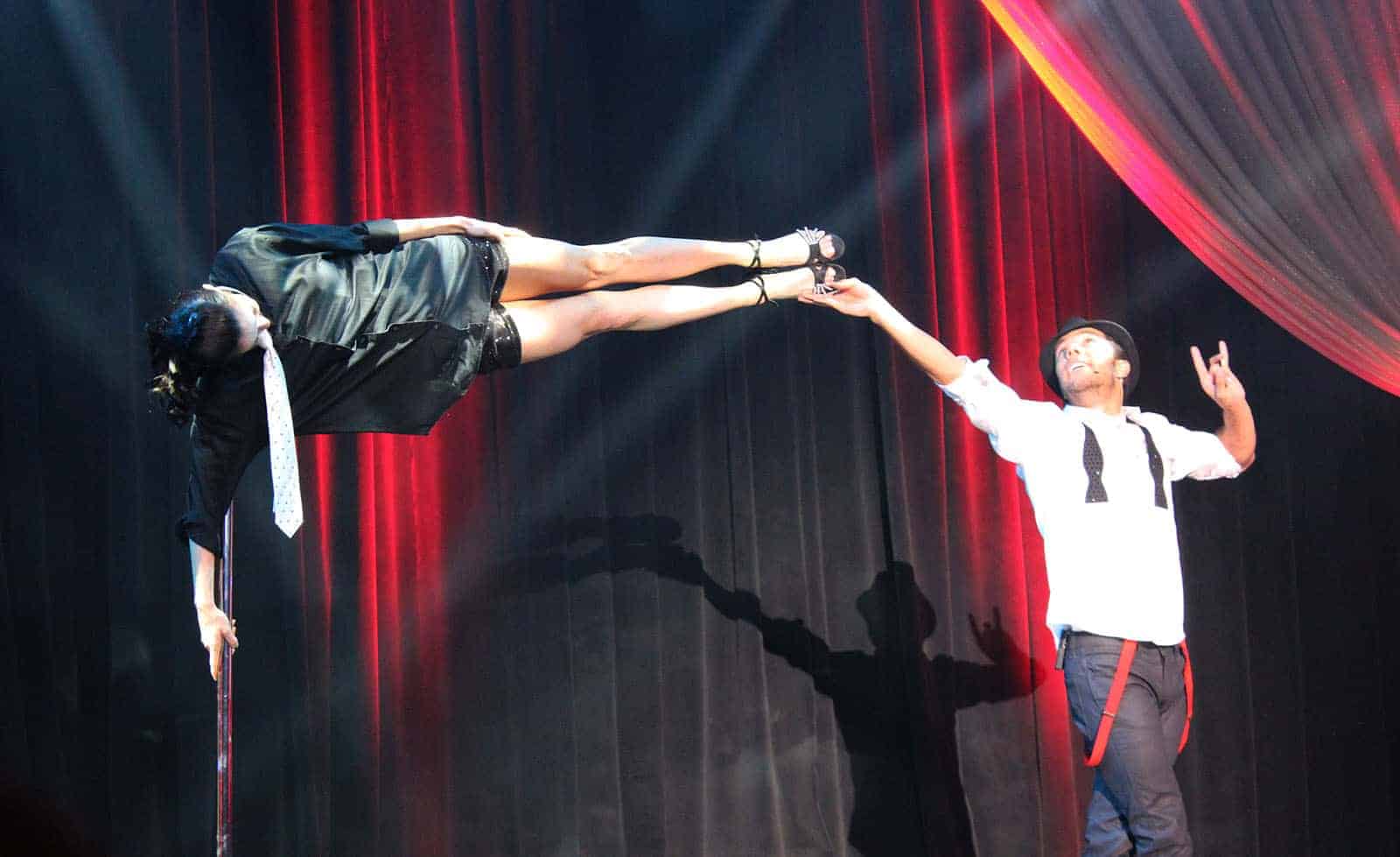 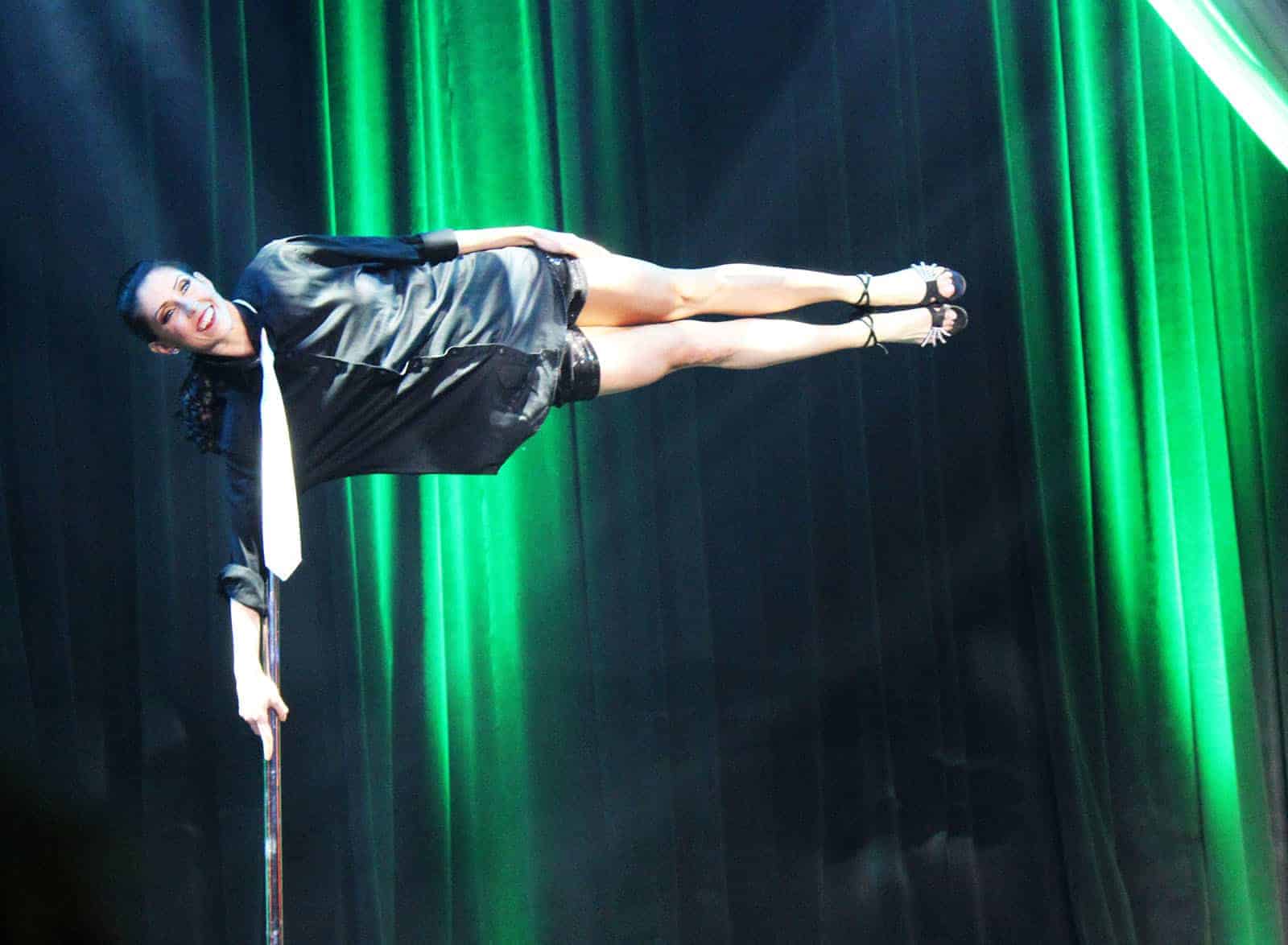 Finally, it was time for dinner in the Island Dining Room. It was much easier to get a table this late (after 8:00pm) as we typically would have to wait 5-10 minutes at prime eating time. Our head waiter, Joao, was so helpful in arranging my vegan meals! He checked back at the table several times throughout the dinner service to make sure that everything was to my liking. It was really great chatting with him and learning a little bit about him, too. First, he brought out some bruschetta bread as a complete surprise for the both of us to share. Then, we had the meal that we ordered. I had a fresh salad with cherry tomatoes and balsamic vinaigrette. The main course was a delicious Pad Thai with tofu. Then, as another surprise, he sent over a dessert of red currant sorbet with mixed berries! I truly felt spoiled. 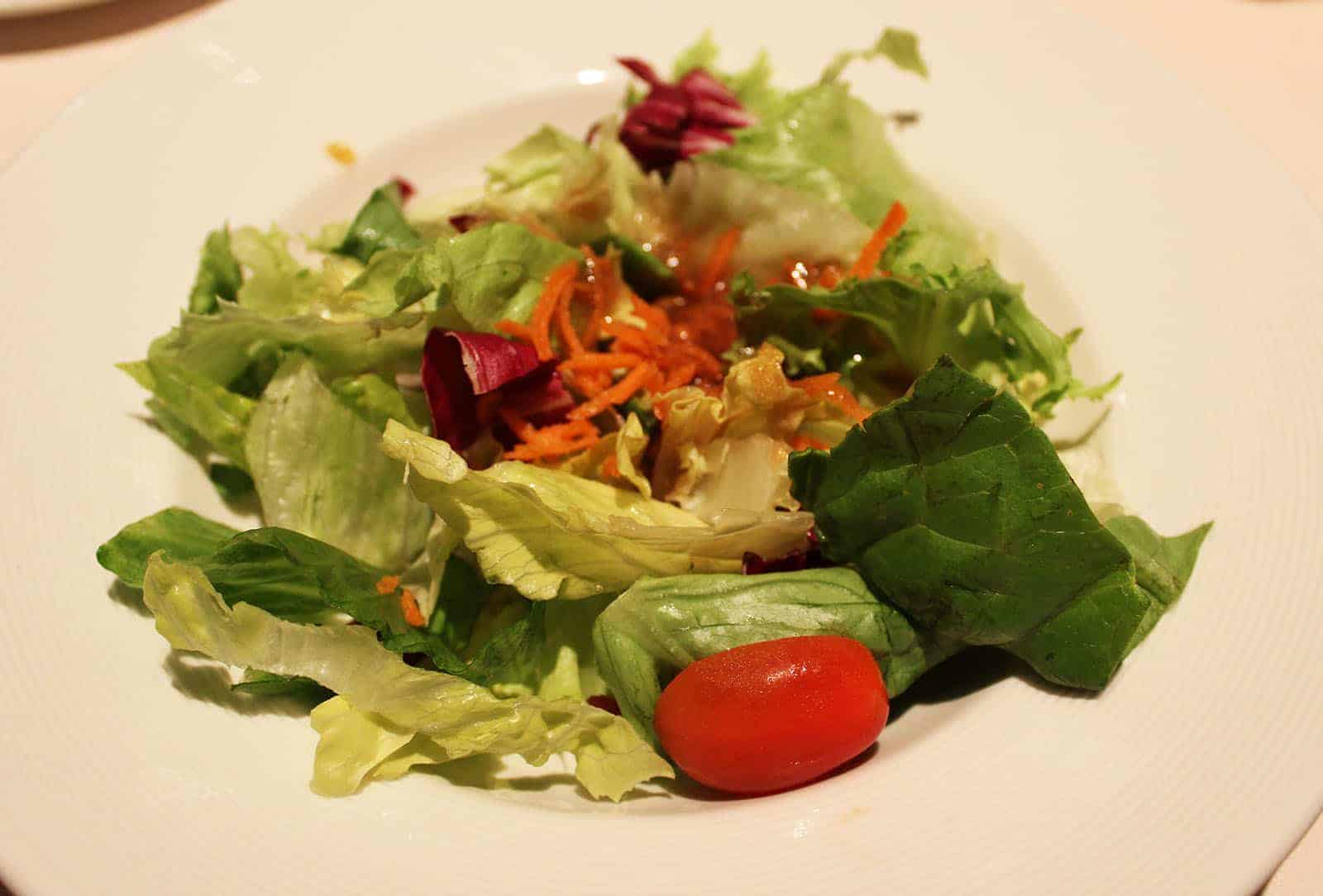 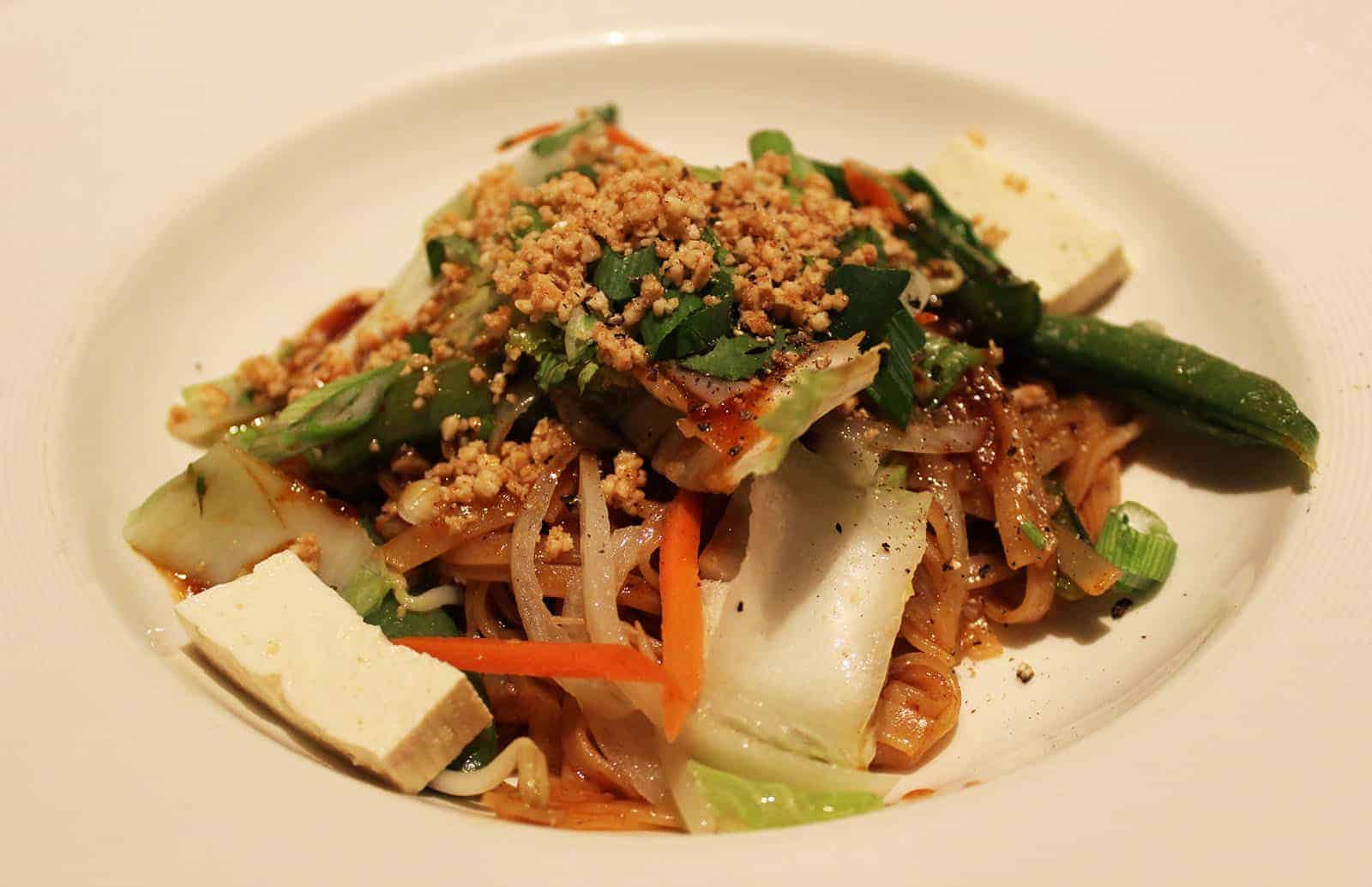 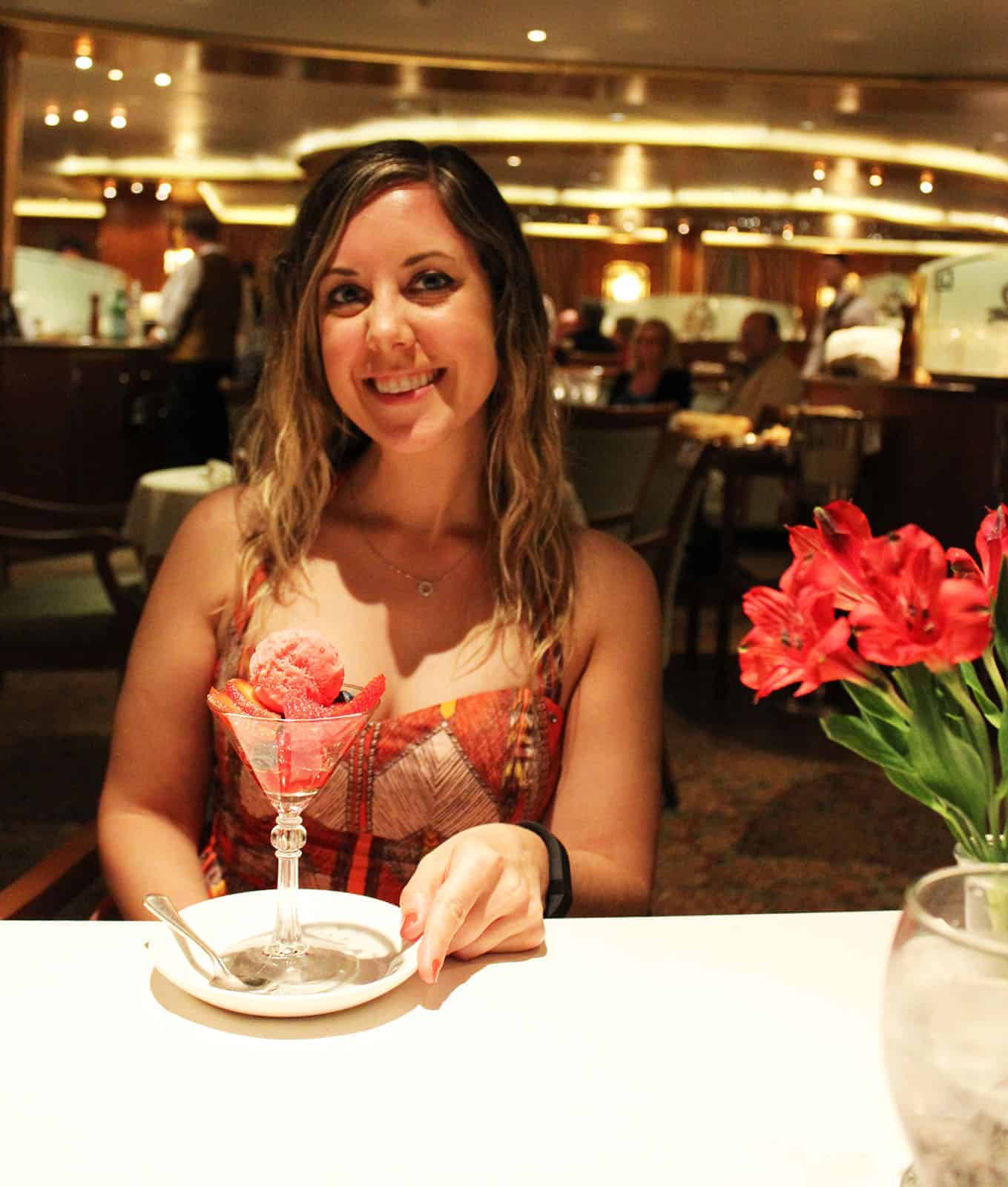 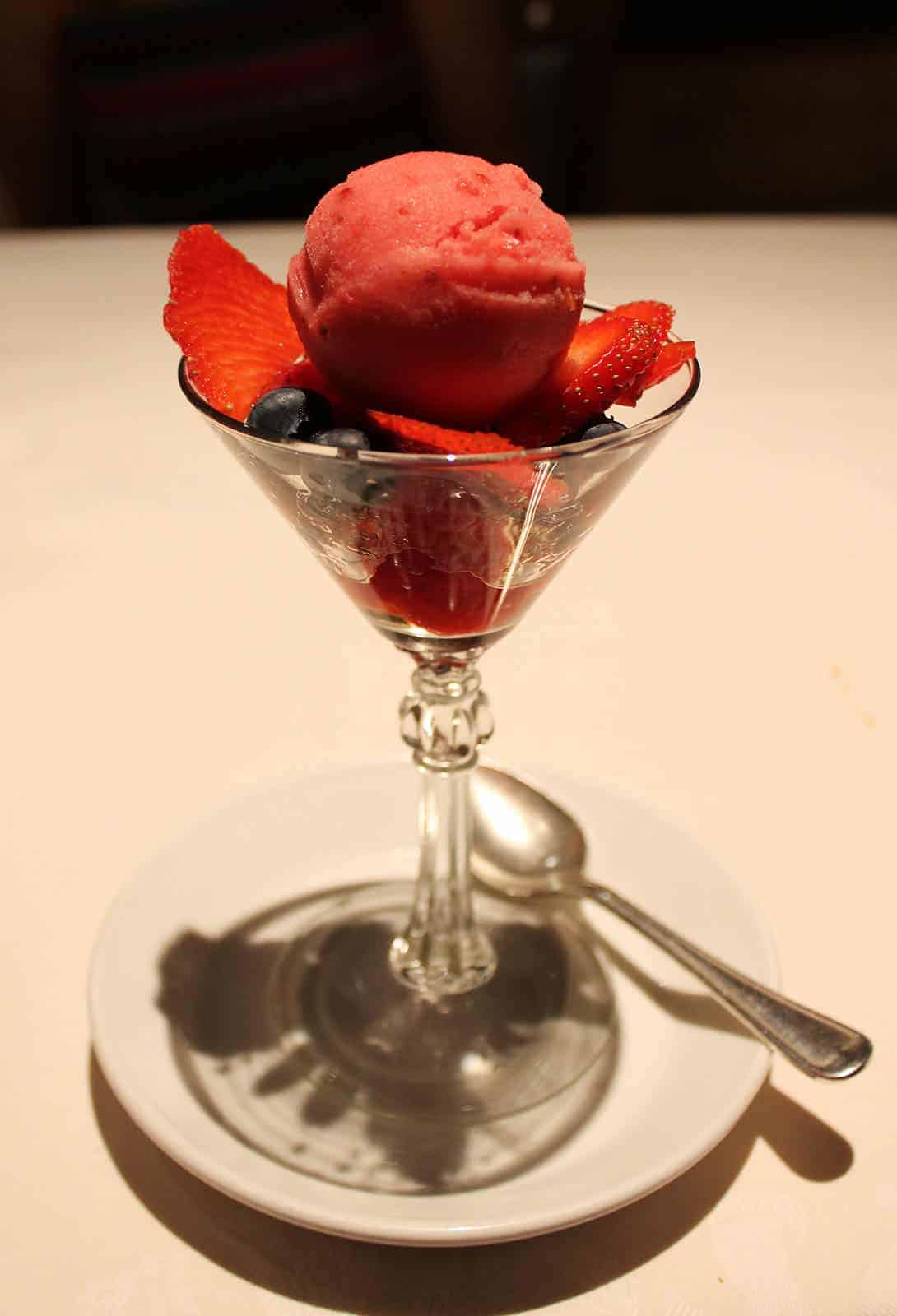 It was fairly late when we finished dinner, but there was still time to catch the tail end of Movie Trivia in Club Fusion. We also stuck around to hear a little of the Karaoke in the lounge afterwards. As you an see, not only did we have an active day at Princess Cays, but there was plenty to do and see on the ship in the evening as well. You’ll get to see more of the ship in the next blog post as we sailed towards St. Martin, enjoying a day at sea.

Great to see vegans catered for so well :) Much nicer food than what we've had on RC.. and going on Princess this Saturday (though not Caribbean Princess) so am looking forward to seeing how they'll cater. Thanks for sharing your travels & food :)

That's too bad about the camera--so frustrating when stuff like that happens! The art at sea sounds like an interesting talk--I always love listening to sessions like that. And, the rest of the performances looked pretty entertaining too! Sounds like a fun day at sea!

Enjoyed your look at life aboard the Caribbean Princess. These first-person reports are really useful for other cruisers thinking of taking the same ship. The photos are great too. A big shame about your Sony camera -- I suspect you should be able to return it to the manufacturer and get it replaced. The water sealing should never fail on these cameras, even after they're out of warranty.

Ach, such a shame about the camera :( I would totally send it back to the manufacturer!

That food is making me feel super hungry. Everything is served so perfectly!

ah, such a bad luck with the camera! it happened to me once that 80% of my pictures were lost. It happened exactly 10 years ago, I'm still grieving ;)